In the last decade, Indian banks made headlines often with the mounting NPAs (Non-Performing Assets) and the following mergers. What are NPAs? What are the causes of NPA and how do they affect banks? Do they have any effect on the stock prices of the affected bank? Let us take a look at each of these questions and find answers.

NPA i.e., a Non-Performing Asset is a loan or advance for which the principal or interest remains overdue or in arrears for more than the prescribed time, generally 90 days. As per RBI, an asset becomes non-performing when it stops generating income for the bank.

Banks are required to classify NPAs further into Substandard, Doubtful, and Loss assets.

1. Substandard assets: Assets that have remained NPA for a period less than or equal to 12 months.

2. Doubtful assets: An asset would be classified as doubtful if it has remained in the substandard category for 12 months.

3. Loss assets: These are NPAs with an extended period of non-payment. With this class, banks are forced to accept that the loan will never be repaid and the entire amount of the loan must be written off completely.

When the money lent becomes uncollectible the banks come under a financial burden affecting their functioning as a whole. So, NPAs directly impact the performance of the bank

The impact of rising NPAs can be as follows:

What caused the NPA crisis in India?

All these factors led to the mounting NPAs in Indian Banks which almost doubled by 2021.

What measures are taken to tackle the NPA crisis?

To resolve the huge NPA crisis, the Government of India (GOI) and RBI took a slew of measures and are continuing with it:

Merger of PSBs by reducing their number to 12 from 27 was one of the biggest moves to boost the economy by increasing the liquidity, diversifying the risk and also combating the issue of NPAs.

How did NPA affect the stock prices of the banks?

The COVID lockdown in 2020 led to the fear of rising NPAs which resulted in BANKNIFTY slipping a low of about 47% in 3-4 months. 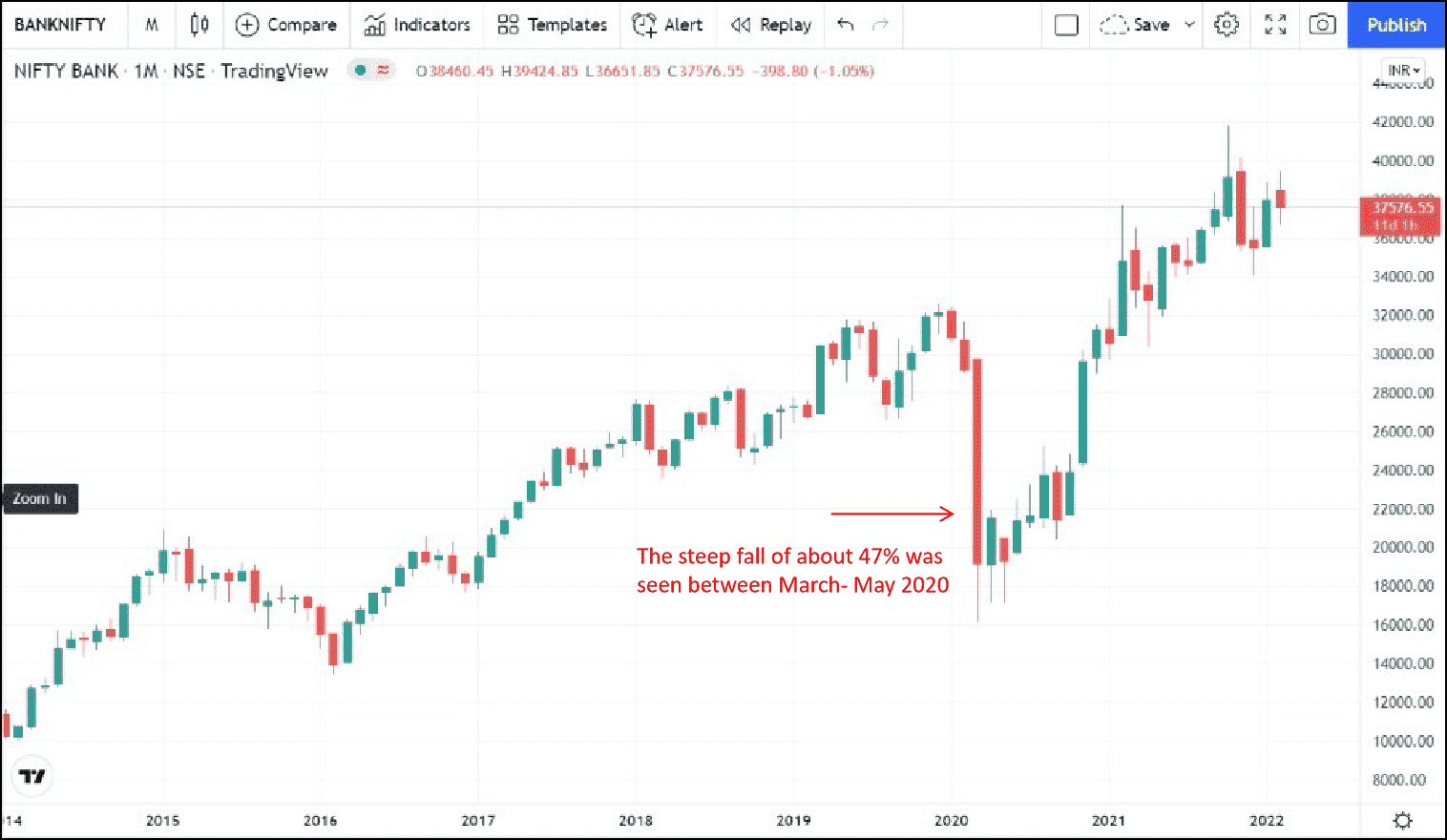 Government of India being the biggest stakeholder in SBI took various corrective measures like infusing liquidity, debt restructuring, etc. at the right time which reduced the negative impact of NPA on stock prices as shown in the chart below 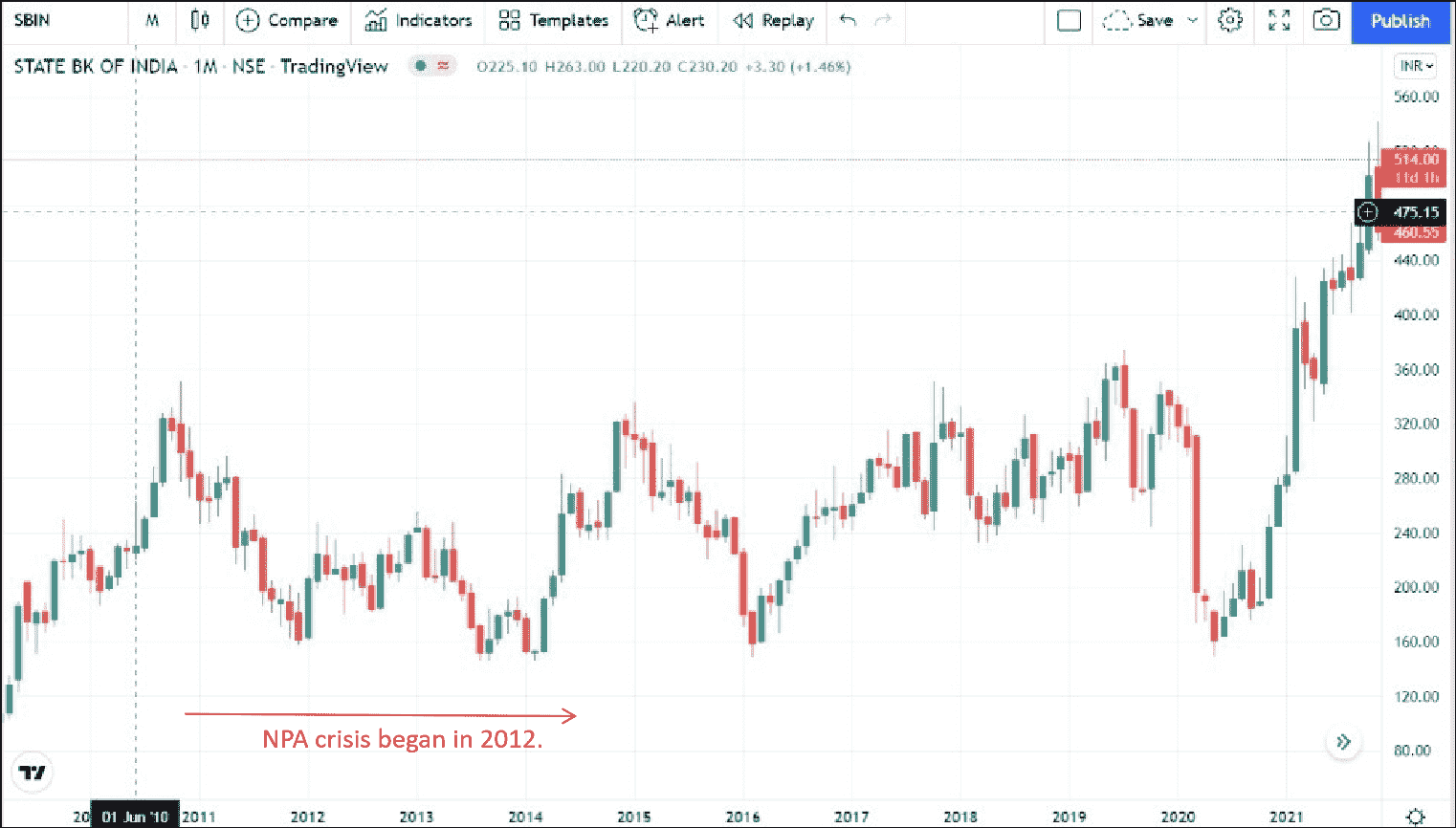 However, the case of Yes Bank is different.The bank’s stock price fell once the NPA issues came out from mid-2018.The emergence of the NPA crisis in the bank led to its stock price crash in the market as shown below. The steady decline in the financial condition of the bank can be attributed largely due to the inability of the bank to raise capital independently to address potential loan losses and resultant downgrades, triggering invocation of bond covenants by investors, and withdrawal of deposits which forced the RBI to step in for corrective measures. While the worst of the NPA crisis is most likely behind for the bank, the crisis led to a significant destruction of wealth for shareholders. 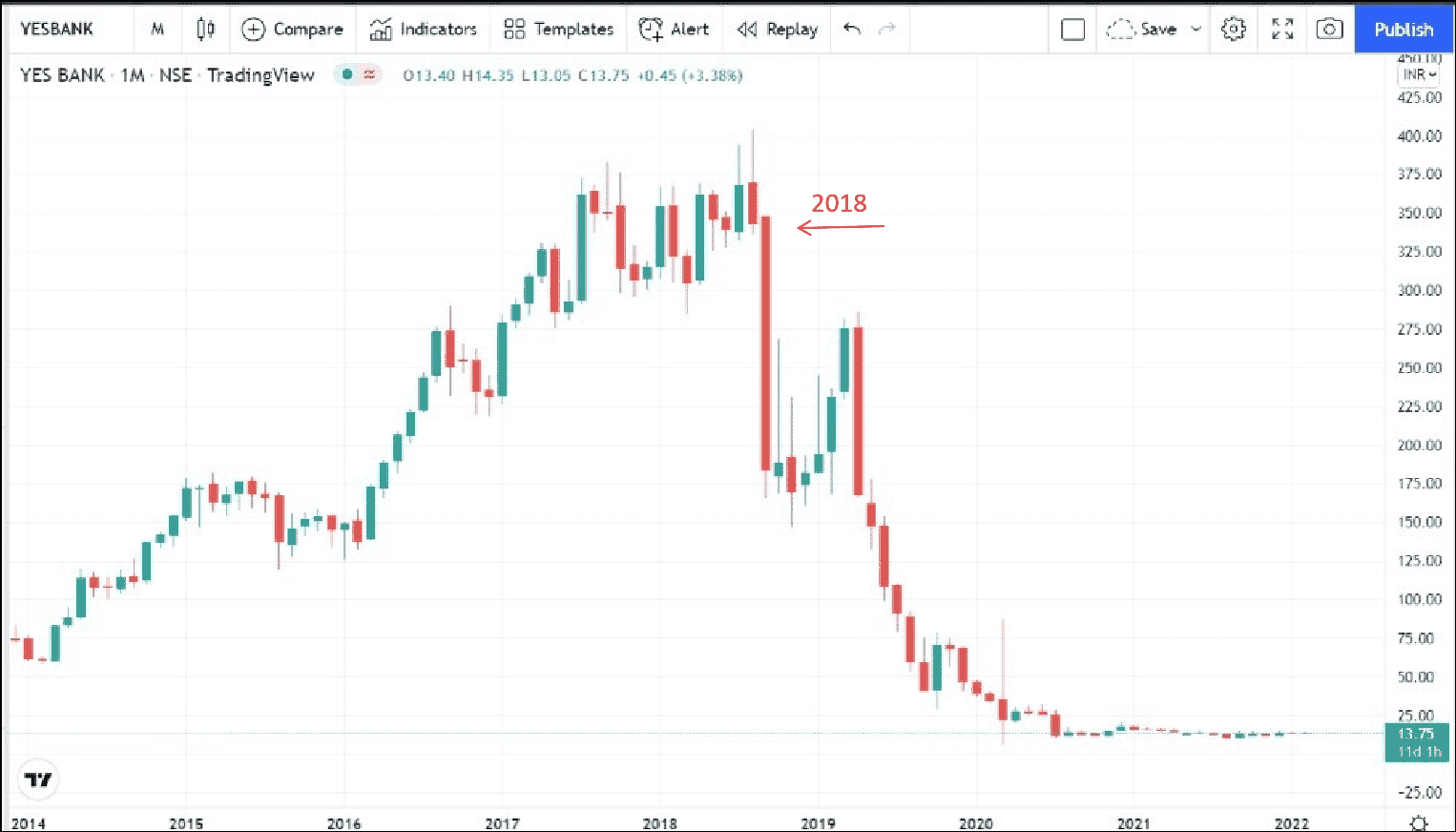 The rise in NPAs not only affects the banking sector but also poses a threat to the growing economy. The slowdown in the economy due to the piling of NPAs affects businesses in all sectors by curbing investments which in turn has an adverse impact on the economy and stock markets.

While the NPA crisis in the banking sector began in the early 2010s a surge in crisis was witnessed between 2013 and March 2020, which was largely driven by the corporate sector. But the COVID-19 pandemic contributed to the prolongation of the crisis with the forced lockdown that badly hit the retail segment. However, post the first wave, there has been a steady decline in the NPAs in the banking sector. While the second wave did cause some minor increases in NPAs during Q1FY2022, it was largely manageable. However, we have seen a continued improvement in NPA in asset quality from Q2FY2022 and the third wave is unlikely to have any impact on the banking sector. This is clearly reflected in the performance of BANKNIFTY which has rallied post the second wave from May.

Disclaimer: This blog is exclusively for educational purposes and does not provide any advice/tips on Investment or recommend buying and selling any stock.