A symmetrical triangle chart pattern primarily symbolizes a volatility contraction in the market. In other words, the market’s volatility is slowly shrinking and may soon break out or break down. This pattern is observed when a share’s price is consolidating in a manner that generates two converging trend lines with closely aligned slopes. This chart pattern itself shows an ongoing period of share price consolidation before it is forced to break down or break out. If the lower trendline experiences a breakdown, this marks the beginning of a new bearish trend. Alternatively, if the upper trendline experiences a breakout, this implies the beginning of a new bullish movement. 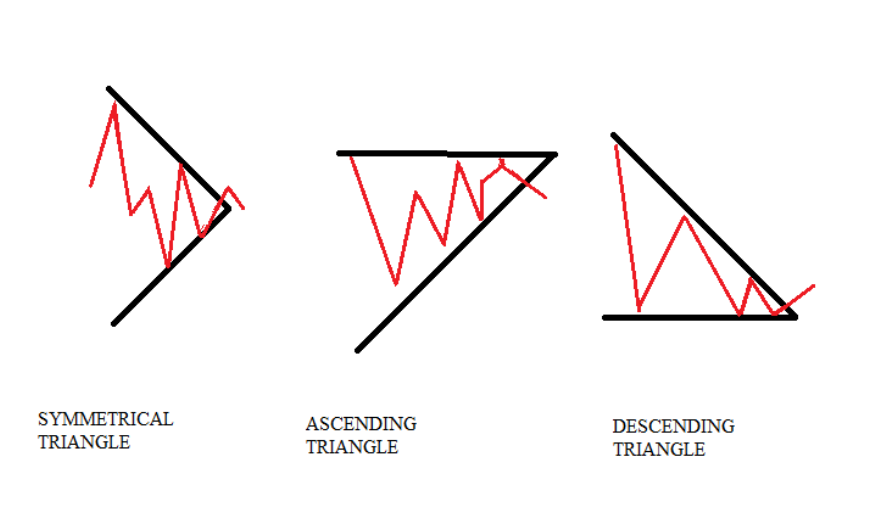 A chart pattern that features two trend lines converging such that they connect in a series of peaks and troughs is a symmetrical triangle pattern or wedge chart pattern. Both trend lines should converge at a roughly equivalent slope, hence giving the shape of a triangle. If both the trend lines converge at an unequal slope, then they are no longer symmetrical. These lines are referred to as ascending or descending triangles.

How to infer the breakout price from a symmetrical triangle pattern?

Traders use the distance from the low and high of the earliest section of the pattern as a means to estimate the breakdown or breakout price point. For instance, let’s say that the symmetrical triangle pattern begins at a low of ₹10.00 and continues to move upwards to ₹15.00 before this range begins to narrow. A breakout as seen at ₹12 would imply a target price of ₹17. The underlying formula is ₹15 — ₹10= ₹5 + ₹12 = ₹17.

Estimating a breakout point also helps in knowing where to place one’s stop loss. Normally, in a symmetrical triangle chart pattern, the stop loss is placed right before the breakout point. For instance, assuming the aforementioned share breaks out on high volume from ₹12.00, traders will usually place their stop-loss right below ₹12.00 to minimize any potential losses. It is also crucial to note that, as with most forms of technical analysis, symmetrical triangle trading works best when one analyses other technical indicators and patterns as well.

An ascending triangle is usually considered a continuation pattern. This means that the pattern remains significant if it occurs within both a downtrend and an uptrend. Once breakout from the triangle occurs, traders are quick to aggressively sell or buy the assets depending upon the direction in which the share price first broke out. Growing volume helps to confirm whether or not the price has broken out. The more the volume increases the more interest in the price moves outside of the pattern.

To form an ascending triangle’s main trendlines, at least two swing lows and two swing highs are necessary. However, a greater number of trendlines converging to touch each other is indicative of more reliable trading results. Since both trendlines are converging into each other, if the share price keeps moving within this triangle for many swings, its price action will grow more coiled, eventually leading to a stronger breakout.

It is common for the share’s volume to be stronger during trend periods than consolidation ones. As an ascending triangle chart pattern is a kind of consolidation, the volume of shares tends to contract somewhat during this time. As mentioned earlier, traders seek out an increased share volume close to a potential breakout point. If the volume suddenly starts increasing, this helps to determine that the security is reaching a potential breakout point.

On the other hand, if the share’s price breaks out on a lower volume, this signals a warning sign that the breakout will lack in strength. This indicates that the price could move back into the pattern, otherwise known as a ‘false breakout’. Hence, it is crucial that traders who are ascending triangle trading keep an eye out on the share volume when determining where the breakout point will be.

For the purpose of trading, an entry is usually considered when a share price breaks out. The unspoken rule among traders is that one should buy if the share’s breakout occurs on its upside, and sell/short their trades if the breakout occurs on the security’s downside. To aid in reducing one’s potential losses, a stop loss is placed right outside the ascending triangle chart pattern. For instance, suppose a trader takes a long trade on an upside breakout, she will place the stop loss just below the triangle’s lower trendline.

It is also quite easy to estimate a profit target from an ascending triangle pattern. This is usually done by subtracting or adding the height of this triangle  – depending on its direction –  from the breakout price. In other words, the ascending triangle pattern’s width is used. Let’s say the triangle has its broadest width at ₹50. This value will be added to the upside breakout point to get a proper estimate of the profit target. On the other hand, this same value is subtracted from the price if it breaks on the downside.

One limitation of this chart pattern  – which is true for most technical indicators – is its potential for giving false breakouts. In some cases, the share price moves outside of the pattern and even proceeds to break out of the price only to re-enter it. In other cases, an ascending triangle pattern may be redrawn many times without generating any momentum as its price skirts past trend lines but does not break out at all. As mentioned before, share volume rising quickly is a good estimate of the breakout point approaching.

A descending triangle is a bearish candlestick pattern – meaning it foretells the occurrence of a period when the price of a particular security is expected to move downwards. It appears when through two lines – one joining a series of lower highs a second horizontal trend line that connects a series of lows.

It is also sometimes referred to as the right-angle triangle due to its shape. The descending triangle chart pattern is an indicator that sell-side traders are getting aggressive and will take control of the price momentum of the security.

Generally, traders wait till there’s a breakdown in the lower support trend and then take short positions, eventually pushing the price of the security lower.

This candlestick pattern is quite popular with traders as it indicates that the demand for a security is weakening in the capital markets. The descending triangle gives a trader the chance to make substantial gains in a short period of time.

Anatomy of a descending triangle pattern:

Investors generally wait for the breakdown point before taking a short position in the asset after the descending triangle chart pattern is confirmed. There is a simple measuring technique to gauge a price target so as to make gains. Usually, it is calculated by subtracting the distance between the upper and lower trend lines at the point of breakdown from the entry price.

In 80 percent of cases, triangles are continuation patterns, and breakouts happen in the prevailing trend’s direction. But there are also exceptions, called triangle failures, where a triangle pattern denotes a trend reversal. It occurs when the breakout occurs in the opposite direction of the existing trend. In such cases, traders must wait for breakout confirmation and alter their positions in the direction of the trend.