What is an annual report? 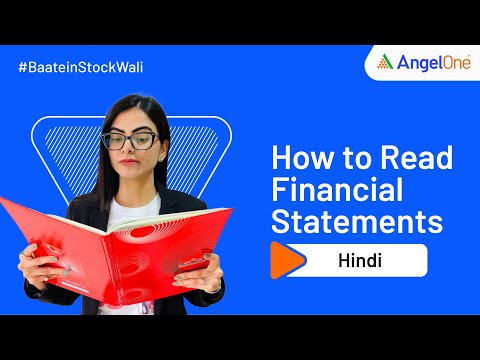 It is not possible to explain each and every line of an annual report, but you will get a broad idea of what to look at in an annual report. Annual reports differ in style and content and their interpretations can also be different. One can develop his/her understanding by reading multiple annual reports over the years and comparing the data with the actual performance of the company. Let us start with the various sections of Eicher Motors’ annual report for 2018-19. 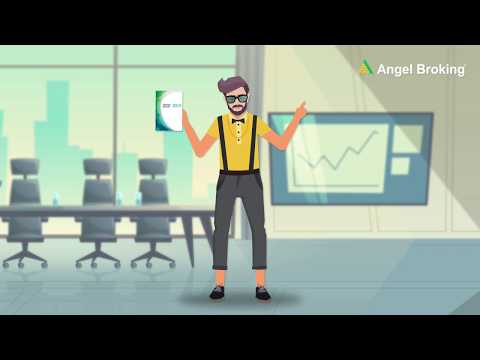 The company has divided the annual report into five broad categories with various sub-sections. The annual report of Eicher Motors starts with the corporate review. The company provides the financial highlights of consolidated operations, which means it includes the sales and profits of subsidiary companies. We will discuss standalone and consolidated financials while discussing financial statements. Eicher Motors has provided data only for two years, but many companies give performance highlights of 5-10 years. It is not of much relevance, but you can use it to analyse the company’s performance over the years.

If you notice a sudden fall or rise in profits in a certain year, try to find the reason for it. The context of the information provided in an annual report is very important.  Without the context. The data is meaningless. For instance, the operating margin before share of profit of joint ventures of Eicher Motors has declined by 220 basis points in a year. Without the share of joint ventures means the decline is in the margin of the motorcycle business. You have to find the reason for the contraction in the margin. 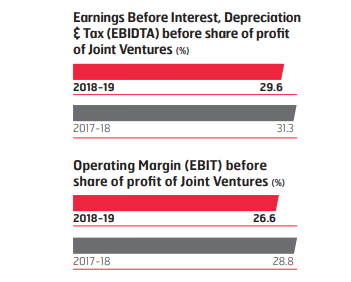 The primary reason, in this case, is the rise in the cost of raw materials. If you go through the standalone profit and loss statement of the company, you will observe a sharp rise in the cost of materials consumed and employee benefits expenses. To get a balanced view, compare the rise in the cost of input materials and the contraction in margins of other motorcycle manufacturers in India. The margin is provided on page 3, but the reason is on page 119 in the financial statement section. One has to connect the dots to derive meaning from an annual report.

After a snapshot of financial performance, Eicher Motors has given a brief of its business units, dealership network, shareholding pattern and number of vehicles sold. It can be helpful for new investors of the company. The company provides the consolidated financial position and operational highlights. Don’t spend too much time reading the highlights as detailed numbers are given in the financial statement section of the annual report.

In Eicher Motors’ case, Managing Director Siddhartha Lal talks in detail about the capacity addition of the company. With the commencement of a new facility in Bhopal, Eicher Motors’ commercial vehicle manufacturing capacity will rise by 40,000 units. The company also increased its motorcycle production capacity. Despite a slowdown in the broader commercial vehicles and premium bikes segment, the company is continuing with its capacity addition plans. It means Lal expects the slowdown to be temporary and a surge in demand in the future. You will have to watch out for the company’s sales data and capacity utilisation in the future. The management statement is generally followed by management discussion and analysis. It is one of the most important segments of an annual report. Companies generally start the management discussion section with a snapshot of macro-economic factors affecting the company. If the company operates in the international markets, it will also discuss global factors. The management of Eicher Motors talks about the slowdown in the two-wheeler segment in the second half of 2018-19. Keep an eye on the business review of the company, product launches and new store additions. With the information, the company will also list the steps it is taking to expand into new markets. 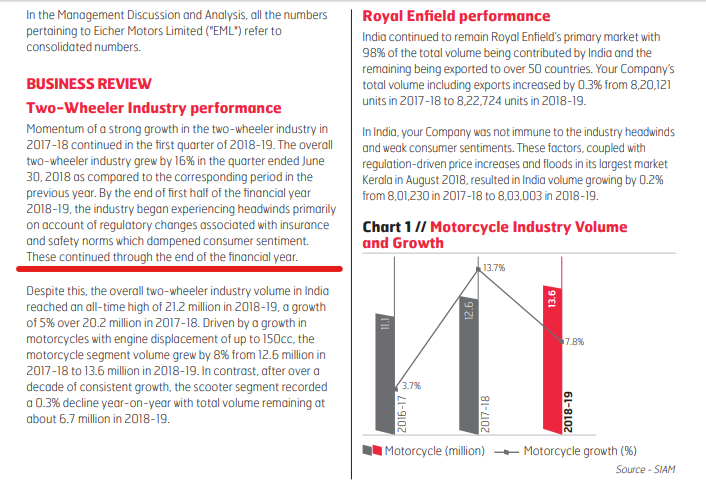 The company will discuss various problems faced by it and the steps it is taking to tackle them. The later parts of the management review shift the narrative from broad trends to specific steps being taken by the company. Read the management discussion and analysis very thoroughly to get a clear idea of the company’s future actions. 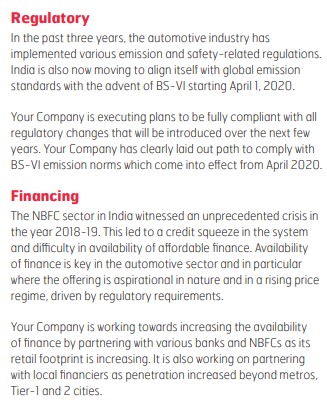 Companies will also try to hide negative developments in the management discussion and analysis. With a keen eye, you can spot developments that are materially negative. One such instance is workers strike and loss of production for Eicher Motors. 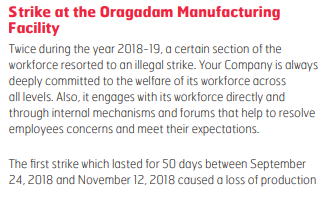 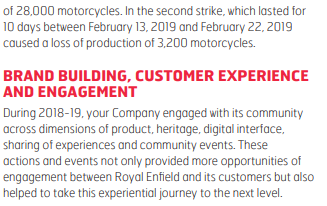 The management discussion is generally followed by a number of reports like the business responsibility report and corporate governance report. You can find the details of subsidiaries, the remuneration of key management personnel and the company’s CSR activities in these reports. These reports can also contain details about related party transactions. You should look out for any hint of related party transactions in these reports. The remuneration of key management is also an important factor. A consistent rise in the remuneration of officials without a similar growth in sales or profits should be a huge negative for investors.

The financial statements of the company consist of three statements

You will encounter the words consolidated and standalone multiple times in the ‘financial statements’ section. It is better to have a clear idea of what consolidated and standalone means. It is common for large global companies to operate through multiple subsidiaries. There can be varying reasons for having several subsidiaries from taxes and corporate governance rules to acquisitions.

Eicher Motors has demarcated its business into two separate units through its subsidiaries. Its motorcycle operations are housed under Royal Enfield and commercial vehicle operations under VE Commercial Vehicles. Though the commercial vehicle arm VECV is a JV between the company and Volvo Group, Eicher Motors has listed it as a subsidiary due to its majority shareholding in the JV.

There are various aspects of how to evaluate consolidated and standalone figures of a company. For instance, selling Royal Enfield motorcycles is the primary business of Eicher Motors. Consider a hypothetical situation where Royal Enfield earns a profit of Rs 200 crore only and its subsidiaries report a profit of Rs 1000. The consolidated profit and loss statement will show a profit of Rs 1200 crore, but will it be a correct metric to judge the company? Weakness in the primary business may not be a good sign for the future.

There may still be two aspects of higher profits from subsidiaries. In the case of Eicher Motors, subsidiaries include the commercial business as well as the overseas motorcycles business housed under companies like Royal Enfield America. If the bulk of the profits attributed to subsidiaries has been contributed by the commercial vehicle arm, then it is a confirmed sign of weakness in the primary motorcycles business. But if the overseas subsidiaries are doing well, it could mean that Royal Enfield is gaining market in lucrative foreign markets. In a nutshell, there can be various interpretations of data and it can be perfected over time by reading annual reports of companies in the same sector.

Note that each figure in a financial statement is known as a line item (marked by black lines in the picture). For clarity, line items are accompanied by ‘notes’ or ‘schedules’ that provide the detail of that particular figure (underlined by the red line). Let us take the example of the cost of raw material in the standalone profit and loss statement of the company. As discussed earlier it had an impact on the company’s operating margins. 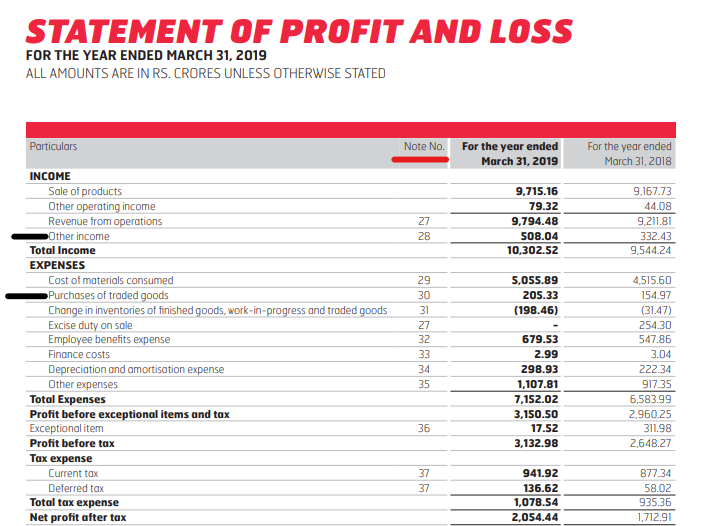 The details of the cost of materials consumed are given in note 29.

In the review of the subsidiary section, Eicher Motors has given a detailed analysis of its biggest subsidiary VE Commercial Vehicles Ltd. The subsidiary is a significant business segment of Eicher Motors and so it’s found a separate mention in the annual report. The section follows a similar trajectory as the broader annual report. It talks about the financial metrics and the performance of the business.

1. Where can I find the annual report of a company?

The annual report of a company can be easily downloaded from the ‘Investors’ section of its website.

2. Can I find about all the subsidiaries of a company from the annual report?

4. Is data on a company’s debt available in the annual report?

The level of debt is an important factor to consider before investing in a company. The debt of a company can be found under the head ‘Indebtedness’ in the annual report. The increase or decrease in debt should be compared with previous years and seen in the context of the increase or decrease of sales. If the company is taking on debt to increase capacity or enter new markets but is not able to grow sales accordingly, it means the company is not utilising capital efficiently. There can be various other interpretations too.

5. When do Indian companies release their annual report?