At times, Freak trades make headlines creating a buzz in the Stock market because of the massive market fluctuations they cause in a few seconds. Let’s take a look at Freak Trades with some examples.

What are Freak Trades?

A Freak Trade is an erroneous trade where the price hits an abnormal level for a fraction of a second and then returns to the previous level. The error may happen due to manipulations, human errors, or technical glitches.

1. One of the instances of freak trades is “Fat Finger” trades that occur due to human error. Just like the typos in texting, traders and dealers in the securities markets can make typos when entering large orders. Erroneous trades caused by such typos, which set off a freak trade, are known as ‘fat finger’ trades.on

Consider this: In October 2012, a trader at a brokerage firm mixed up the volume and price columns that led to an erroneous sell order of ₹650 crores worth of Nifty stocks. It sparked a drop of 15% in the Nifty within minutes of the order placement.

3. As per NSE, September 14, 2021, futures contracts of HDFC, Bharti Airtel, HDFC Bank, Tata Consultancy Services (TCS), and Reliance Industries (RIL) jumped around 10% each for a few nanoseconds during early trading. 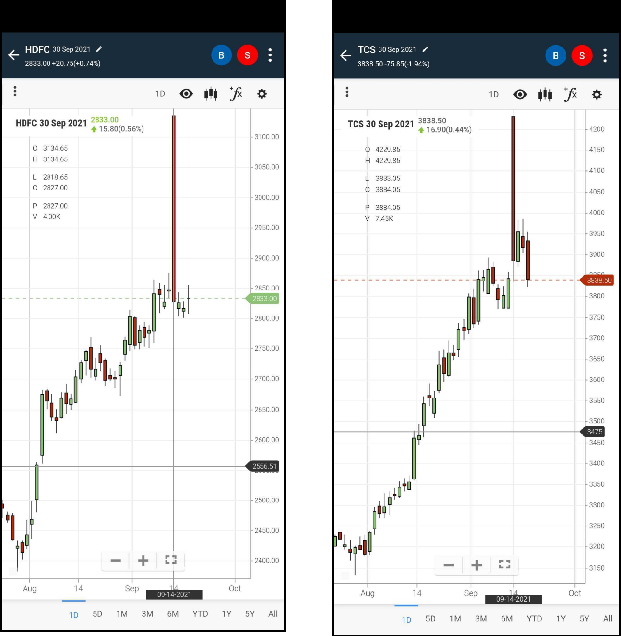 From the example mentioned above of August 20, 2021, the call option contract for the NSE’s main index Nifty (16,450 strike price) for August expiry rose by approximately 800% from ₹135.8- ₹803.5, causing a Freak trade. Traders having Stop loss Market orders at ₹120-₹200 incurred huge losses as all of those stop-losses got triggered and executed away from the Last Traded Price.

Due to the high impact cost associated with Stop loss Market orders in occurrence of a Freak trade, NSE is discontinuing Stop loss Market (SL-M) orders for Index Options and Stock Options contracts from September 27,2021.

A Stop-loss Limit order may be a better option to minimize losses in a Freak Trade scenario.

Many times freak trades do not show up on the charting platforms. It’s because Charts are formed by the brokers’ trading platforms from the data that they receive from the exchanges. This data typically covers less than four trades per second, even though the actual number of transactions per second can be more. So, all the trades do not make it to the chart. Hence during a Freak Trade occurrence, retail investors are often baffled about the reason behind having their Stop loss Market orders executed far away from the last traded price.

We hope this article helped you better understand what freak trades are and their role in triggering Stop loss orders.