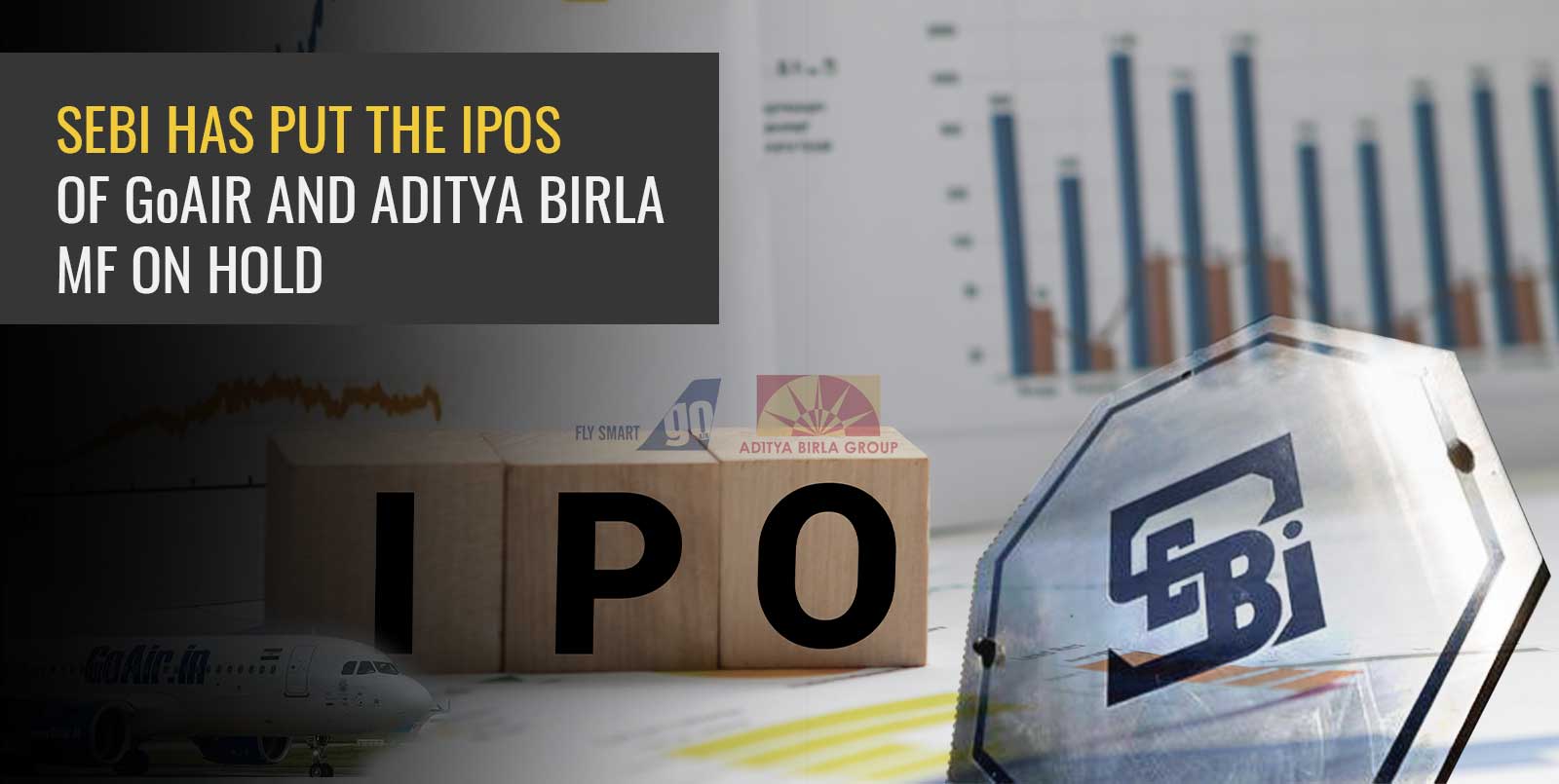 The Securities and Exchange Board of India (SEBI) said on Monday that the IPO approval process for Go Airline (India) Ltd and Aditya Birla Sun Life AMC has been put on hold. The notice on the regulator’s website did not give any justification for the temporary suspension of these approvals; however, it did say that it had sent some observations to merchant bankers over these two difficulties but did not clarify what those observations were.

The proposed IPO of Go Airlines aims to generate up to Rs. 3,600 crores, while the Aditya Birla Sun Life AMC IPO will see existing shareholders sell a portion of their stock through an offer for sale. GoAir, which has rebranded as GoFirst, intends to utilise the IPO proceeds primarily to pay down debt.

Go Airlines plans to use Rs. 2,015.81 crores of the Rs. 3.600 crores it hopes to raise for payment and scheduled repayment of outstanding borrowings, Rs. 279.26 crores for replacing letters of credit with cash deposits to secure lease rental payments and aircraft maintenance from leasing companies, and Rs. 254.93 crore to repay dues to Indian Oil Corp. Ltd for jet fuel purchases, according to the company.

Due to a pending investigation into Bombay Dyeing Manufacturing Company Ltd and its owners, the Wadias, the Securities and Exchange Board of India (SEBI) has temporarily delayed Go Airlines Ltd initial public offering (IPO).

The IPO of GoAir, now known as GoFirst, has been postponed, according to the Sebi website. The regulator’s Corporation Finance Investigation Department (CFID) issued a show-cause notice to Bombay Dyeing and its promoters in the first week of June for alleged irregularities. In listed firms, the CFID conducts preliminary and extensive investigations of fraud, diversion, and syphoning of funds.

On May 13, GoAir filed a draft red herring prospectus for a new share offering to raise Rs. 3,600 crores. Go Air is owned by promoter entities, including Bombay Dyeing Chairman Nusli Wadia in his personal capacity.

According to SEBI’s internal regulation, if one of the regulator’s departments is investigating a case, a linked business that has filed for DRHP may not receive permission for 90 days, which can be extended by another 45 days. Go Air obtained an exemption from SEBI and asked the regulator to look into the matter. The DRHP is typically vetted by SEBI, and only after its approval can an issuer announce an IPO date.

GoAir is attempting to generate funds at a time when the airline sector is confronted with its most severe challenge yet, courtesy of the pandemic. For the first nine months of FY21, cash flow from operations was Rs. 232 crores, down from Rs. 1738 crores in FY20.

COVID-19, on the other hand, has already caused problems for the corporation. According to the DRHP, the company has lost money for the past four years. The company had a net debt of Rs. 7346 crores and a negative net worth of Rs. 1,961 crores as of December 31, 2020. The proceeds from the IPO will be used to pay off debt and replace letters of credit provided to select aircraft lessors.

According to an update from the capital markets regulator SEBI on Monday, the scheduled initial share sale of Aditya Birla Sun Life AMC has been put on hold. The Securities and Exchange Board of India (SEBI) did not provide any additional information.

In April, the asset management firm filed preliminary documents with the Securities and Exchange Board of India (Sebi) to raise capital through an initial public offering (IPO). The proposed IPO is purely an offer for sale, according to the draft papers, with two promoters—Aditya Birla Capital and Sun Life (India) AMC Investments – divesting their stakes in the asset management firm.

According to merchant banking sources, the IPO is projected to raise Rs. 1,500-2,000 crores based on the average industry price earning ratio. In market jargon, Sebi’s assessment is akin to its approval to float the public offering. Aditya Birla is a businessman and philanthropist Aditya Birla Sun Life Mutual Fund’s investment manager, Sun Life AMC Ltd, is a joint venture between Aditya Birla Group and Sun Life Financial Inc of Canada.

For more such interesting news about the world of IPOs, finance, investment, and stock markets, check out Angel One blogs.