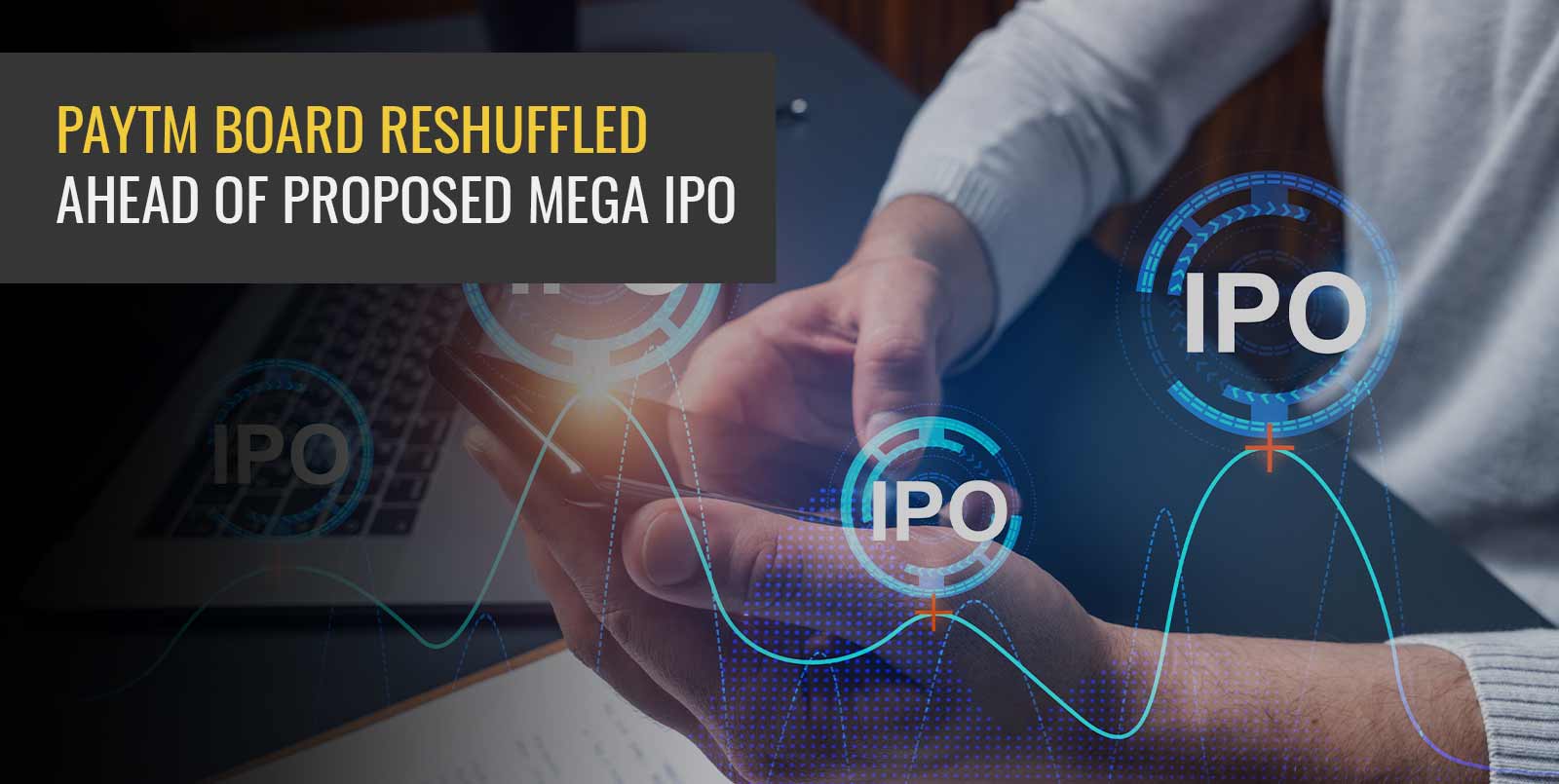 Ahead of its mega initial public offering (IPO), digital payments firm Paytm has seen a reshuffle of the company board, with Ant Group’s Jing Xiandong being replaced by Douglas Lehman Feagin as the senior vice president of the group.

The parent company of Paytm, One97 Communications, is expected to file its draft red herring prospectus (DRHP) with SEBI following an extraordinary general meeting of the form on July 12, according to news reports.

Apart from the reshuffling of the board, Paytm has also brought in Saama Capital managing partner Ash Lilani as an independent director. Further, Alibaba’s Michael Yuen Jen Yao and Berkshire Hathaway investment manager, Todd Anthony Combs, have retired from the board.

Also, Paytm has proposed that its founder, Vijay Shekhar Sharma, be declassified as the company’s promoter ahead of the IPO. The proposal will also be taken up for discussion at the July 12 EGM. The declassification is expected by the stakeholders because the promoter doesn’t own 20 per cent stake, which is mandated by market regulator SEBI, for classification as promoter.The move has been proposed keeping in view regulatory requirements before the IPO hits the market. Reports also suggest that the digital payments firm could raise a fresh pre-IPO round ahead of the IPO, which is expected in the October to December quarter this year.

The digital payments company seeks a valuation in the $24-$30 billion bracket. It is valued at $16 billion currently, making it India’s startup with the second highest valuation. Edtech startup Byju’s has a $16.5 billion valuation.

The much anticipated Paytm IPO is expected to be in the $2.2 to $2.3 billion range or Rs 16,600 crore, and this includes both fresh issue and offer for sale (OFS). Paytm had informed its shareholders earlier that it planned to issue fresh shares worth $1.6 billion or Rs 12,000 crore and the OFS option would be in the $600 million or Rs 4,580 crore range.

The company may also seek approval of shareholders to increase the IPO size to nearly Rs 19,318 crore or $2.6 billion as it approaches the date of its prospective listing, according to some reports. If this proposal gets the go-ahead, the Paytm IPO has the potential to be one of the largest IPOs (in dollars) following Coal India, which was sized at $3.3 billion and Reliance Power, which was sized around $2.4 billion.

In the fiscal year 2020-21, the consolidated revenues from operations of One97 Communications had fallen 14 per cent to touch Rs 2802 crore, as per the annual report of the company. However, losses were bridged to Rs 1701 crore in the last fiscal, compared to a loss of Rs 2942 crore in FY2020.

Apart from the Paytm IPO, the other startups that are planning to launch their public offerings include Nykaa, Zomato, Delhivery, Grofers, Lenskart and Policybazaar. The Zomato IPO may be expected in 2021, according to news reports. The online food delivery firm is looking at raising nearly Rs 8,250 crore through its IPO. As of June 2021, two tech startups, including travel aggregator EaseMyTrip and sports and gaming platform Nazara Tech, have launched their IPOs.

There has been a flurry of IPOs this year, with Indian companies raising Rs 27,417 crore through IPOs in the first half of this year, which is said to be the highest number for nearly ten years, when compared to the first six months of the past years. The liquidity in the markets and frenzy of investors have added to the buoyancy of the stock markets in the last year. As many as 11 companies are expected to launch IPOs in July, with an expectation of raising more than Rs 23,800 crore.

Digital payments firm Paytm has reshuffled its board, with Ant Group senior vice president, Jing Xiandong being replaced by Douglas Feagin and Alibaba representative Michael Yuen Jen Yao retiring from the board. The payments firm is expected to launch its mega IPO with an expected size of around $2.2 to $2.3 billion, in the October to December quarter. The company is likely to file its DRHP after an EGM on July 12, news reports suggest. If the IPO launches, it may surpass Coal India’s 2010 IPO, the country’s biggest public issue at Rs 15,200 crore.