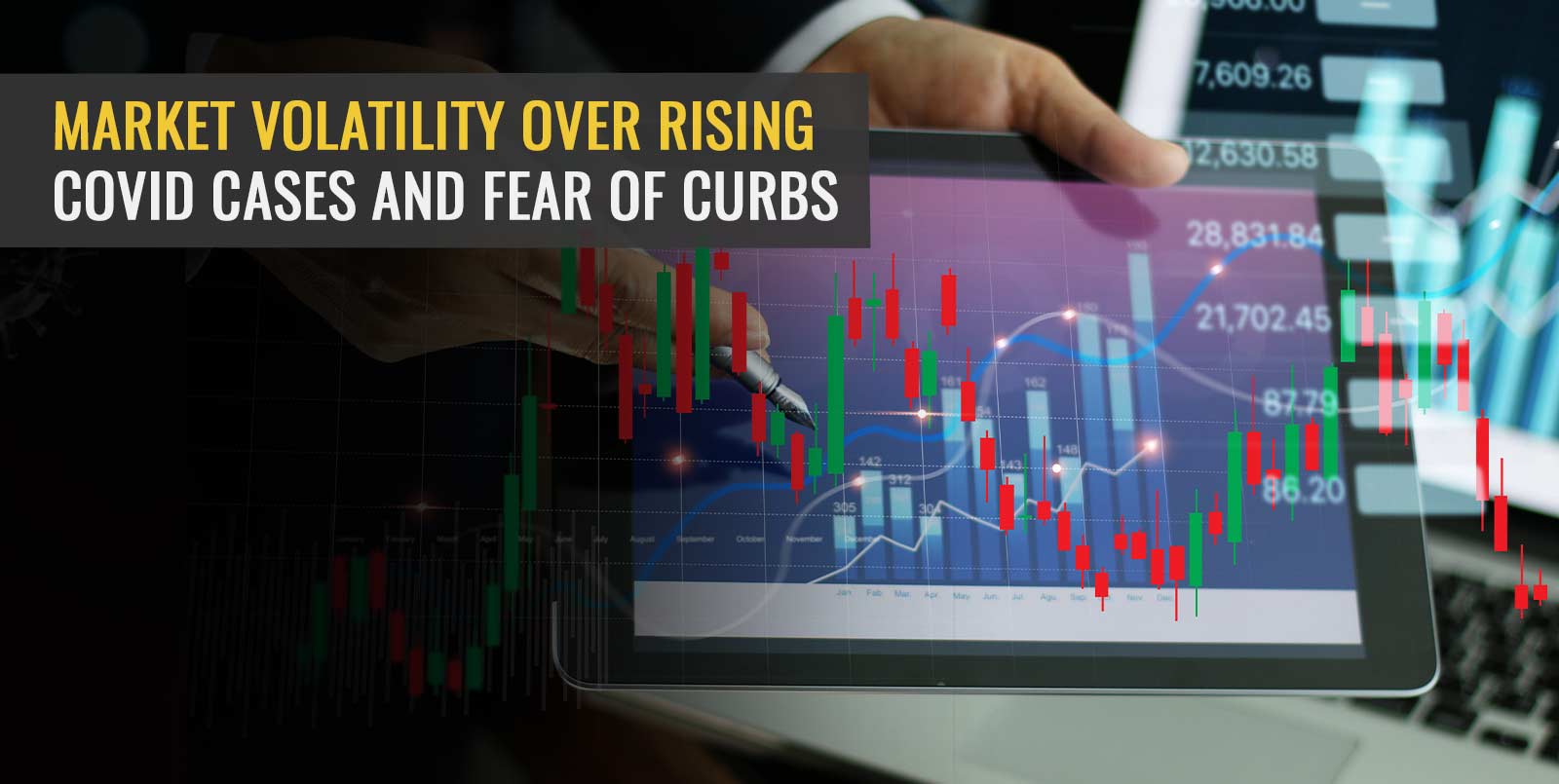 India’s coronavirus daily tally touched a record high of 1,03,558 fresh infections on Monday, April 5, the highest pandemic numbers in the country, taking the Covid-19 case tally to 1,25,89,067 cases, according to the Union Health Ministry. The last single-day peak was registered when India recorded 97,894 infections on September 17 last year. Out of the over 1 lakh new cases, 57,000 were from the state of Maharashtra.

Following this rise in infections, the benchmark indices tumbled on Monday, with the Sensex falling by up to 1400 points and the Nifty losing 230 points to close at 49,159 and 14,638 levels respectively. The Nifty shed 1.5 per cent while the Sensex crashed 1.7 per cent. The broader markets too turned slippery with the Nifty Midcap 100 and the Nifty Smallcap Index dropping 1.3 and1.5 per cent respectively. The wealth of investors dropped more than Rs 4.54 lakh crore in afternoon trade on Monday. Earlier last week, on March 30, investor wealth had grown by Rs 3.54 lakh crore as investors had reinforced confidence in economic revival and progress of vaccinations.

However, today, the markets seem to be witnessing a recovery, as the BSE Sensex went up 150 points to touch 49,320 levels and the Nifty50 Index topping 14,650-mark. The Sensex has staged a recovery of 0.09 per cent post noon. Most of the Nifty indices (Sectoral) have been trading in the green, with the Nifty Metal index going up by 1.4 per cent. Both the BSE Midcap and Smallcap indices have been hovering 1 per cent higher.

The BSE Sensex has seen a spectacular run ever since the low of March 2020, when it crashed to 25k levels. In January 2021, it touched the 50k summit, buoyed by foreign investor confidence in India and liquidity in the global markets. The central bank’s accommodative stance and the stimulus packages from the government also helped greatly. The current Sensex crash is based on fears of a rising second wave of infections.

Along with the sharp drop in the benchmark indices, India also saw a drop in the manufacturing PMI — a seven-month dip of 55.4. The Manufacturing Purchasing Managers’ Index by IHS Markit shows that factory activity was at its weakest this month, although it has stayed above the 50 levels. If the PMI drops below 50, it indicates contraction. In February, the PMI was 57.5.

The rise for the drop in benchmark indices and the PMI may be attributed to the steep increase in Covid cases apart from concerns about its impact on economic activities. Maharashtra announced a weekend lockdown as a step to curb the spread of the virus and there are fears that there could be more lockdowns as the cases continue to rise. The state has also launched several curbs on mobility as part of the ‘Break the Chain’ campaign which will be in force till the end of the month. This has made an impact on market sentiment.

According to CARE Ratings, the lockdown in Maharashtra could shave off 0.32 per cent on the gross value added (GVA) growth nationally. CARE Ratings also lowered its national GDP growth projections to 10.7-10.9 per cent from the 11-11.2 per cent projected one week earlier. The Maharashtra lockdown is likely to shave off Rs 40,000 crore and hotels, trade and transport sectors will bear the brunt of the restrictions pertaining to the rise in cases, according to the Ratings agency. Also, Maharashtra accounts for more than 13 per cent of India’s GDP and 20 per cent of the industrial output nationally. The state is crucial in India’s fight to curb the pandemic and also in contributing to the nation’s economic revival.

It may be recalled that the World Bank had recently raised its projection for India’s economic growth to 10.1 per cent for 2021-22, an increase of a huge 4.7 percentage points on the back of private consumption revival and increase in investments. The report however noted that because of the uncertainty over Covid cases in 2021-2022, India will grow in a range that is between 7.5 and 12.5 per cent for the fiscal year 2022. The World Bank report says that a lot rests on the progress of the vaccination programme which is underway.

Even though Moody’s Analytics had also predicted that India’s GDP is likely to grow 12 per cent this year, it has also sounded a note of caution over the second wave of coronavirus infections and said vaccination would be the key to sustain economic recovery.

Meanwhile, India’s cumulative vaccine doses breached the eight-crore mark, according to the Health Ministry. India has allowed vaccination for everyone over 45 years of age. The Maharashtra chief minister has sought the Centre to consider everyone above 25 for vaccination. The progress of the drive will ensure that economic revival is on track and the markets rebound.

As daily Covid-19 cases touched the one lakh level on Monday, markets crashed by over 1.5 per cent on Monday. Today, the indices are in the green again, with some sort of recovery on the cards. The markets will take a close look at the progress of the vaccination programme, which will impact the pace of economic progress in the country.