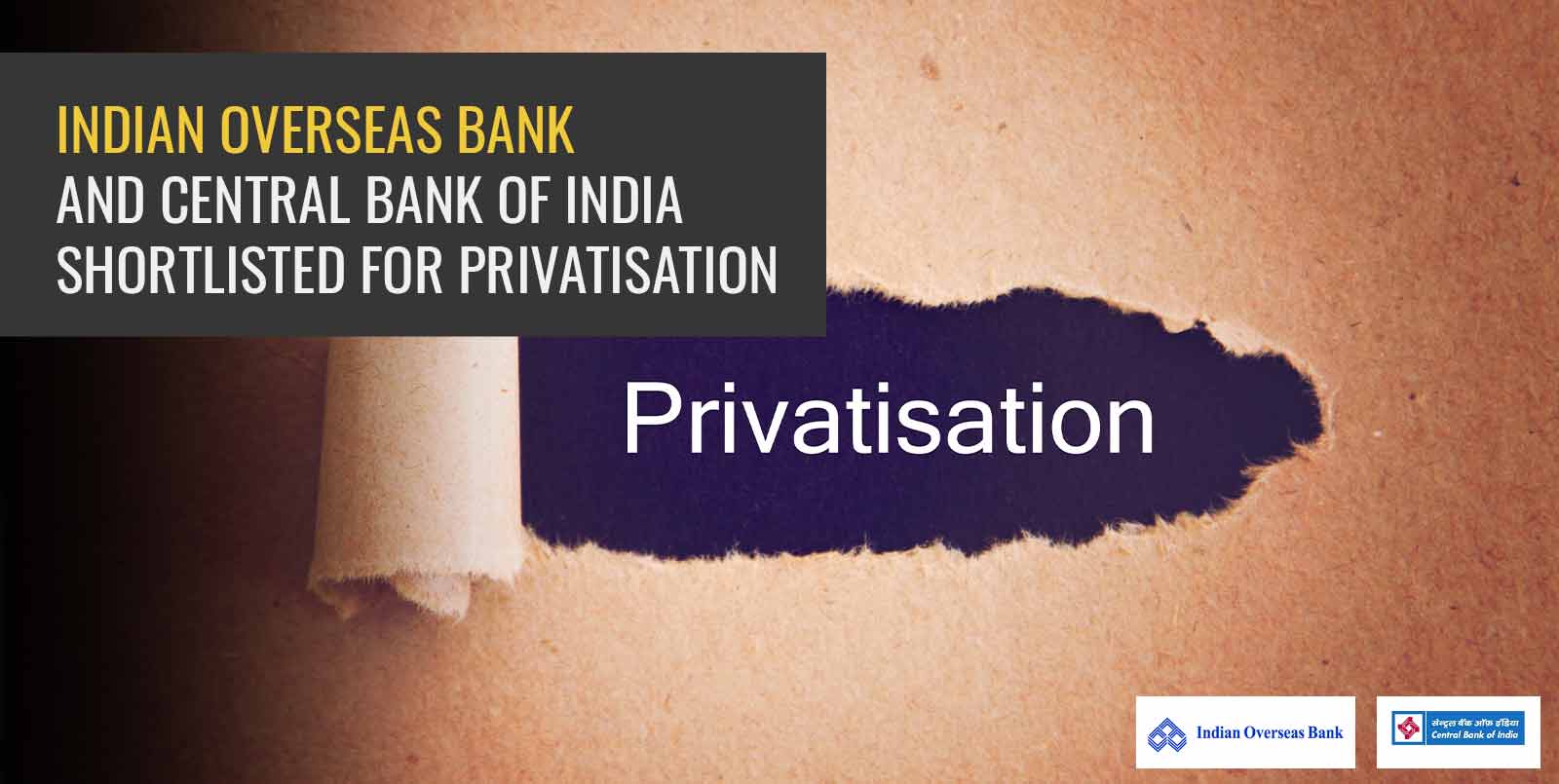 The glimpse provided in the Union Budget of the financial year 2021-22 is now on the verge of realisation – NITI Aayog has submitted its report containing the name of two banks ready for privatisation.

In her Budget speech, the honourable Finance Minister, Nirmala Sitharaman, reflected on the government’s plan to privatise two public-sector banks in the current financial year. Keeping up this promise, they have now shortlisted the Central Bank of India and the Indian Overseas Bank.

In this move of privatisation, the government is planning divestment of 51% in the first phase.

Further, the Indian Government has plans to gather Rs.1.75 lakh crore by selling its stakes in various government-backed financial institutions and public sector companies. This budget has been revised from its initial figure of Rs.2.10 lakh crore from CPSE disinvestment in the previous financial year.

How is it possible?

To make this move a reality, the Indian Government is planning to amend the Banking Regulations Act and the Banking Law Act in the upcoming monsoon session of Parliament.

The role of NITI Aayog

NITI Aayog is spearheading this strategic disinvestment. It has been entrusted with the job of identifying suitable PSU banks for this move. Cabinet Secretary Rajiv Gauba heads this panel in charge.

NITI Aayog has recently submitted a report to the core group of secretaries. Following approval from this core group, it will then go to an Alternative Mechanism (AM) for approval.

After clearance, it will eventually move to the Cabinet, which is led by the honourable Prime Minister, for final approval.

Any changes in the regulations to facilitate this move without any interruption will start once Cabinet approves this proposal. Additionally, the Reserve Bank of India is also in talks with the Central Government regarding this privatisation of Public Sector Banks.

In accordance with this news of sale, the Finance Minister has stressed the fact that employee benefits will get first priority during this privatisation, and no one will be left without adequate compensation. Moreover, salaries and pensions of each employee will be taken care of without any lapse.

PTI reported at the start of this month that, to ease this sale, public sector banks have decided to come up with an attractive voluntary retirement scheme to compensate their employees and reduce their workforce to allow private entities to take over without any hassle.

This news of privatisation has not made any significant impact on the overall movement of the share market. This has been beneficial for investors, with individuals keeping an eye out on the movements of share prices of such organisations.

Also, the final outcome of this privatisation proposal will bring an expected shift in the movement of the Indian share market in every index. Investors can keep an eye out on this aspect as well.

If you are not aware of equity shares, interim dividends, and other aspects of the Indian stock market, along with the latest market news and trends, keep your eyes glued to Angel One Blogs.