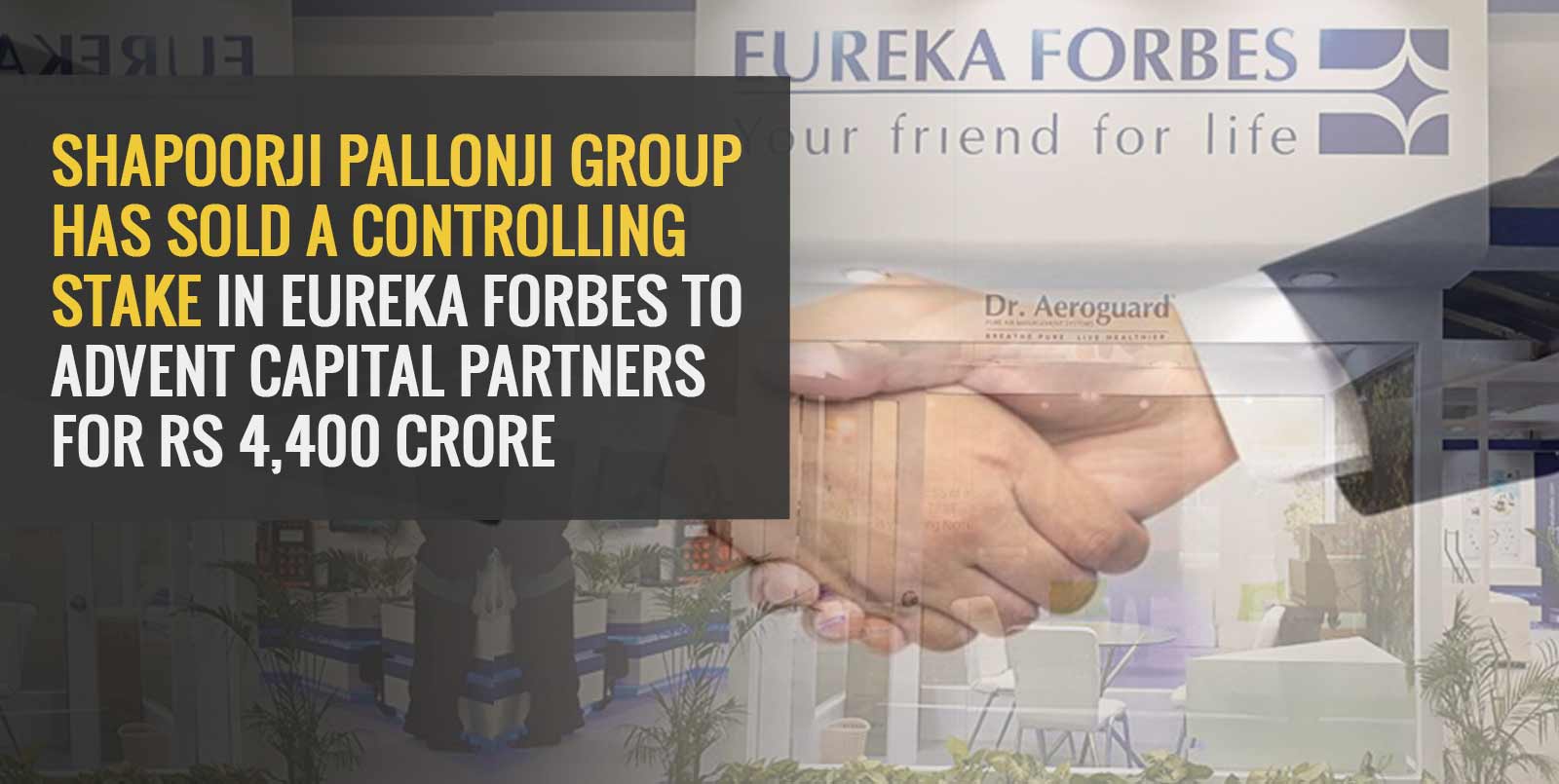 Eureka Forbes has been sold to Private Equity fund Advent International for Rs 4,400 crore by the Shapoorji Pallonji Group.The proceeds from the transaction will be used to reduce the 156-year-old conglomerate’s debt and focus on Afcons’ primary construction and engineering division.

According to the SP group, the estimate of Rs 4,400 crore for a 72.56% interest is at a business level and depending on final adjustments. It also said that the sale process, which began in November 2019, will include an open offer for the remaining stake after Eureka Forbes’ demerger and listing.

“Eureka Forbes, a 100 percent subsidiary of Forbes & Company, will be demerged into a standalone company and listed on the BSE under a scheme of arrangement. Advent will purchase up to 72.56 percent of Eureka Forbes’ then existing stock on a fully diluted basis from SP Group-owned Forbes & Co, as well as make an open offer for the remaining portion, following the demerger, and listing. The acquisition is subject to closing conditions as well as statutory and regulatory approvals,” according to the business.

The Shapoorji Pallonji Group, which owns over 18% of the Tata Group, is in debt to the tune of Rs 20,000 crore. Around Rs. 12,000 crores are covered by the RBI’s moratorium, which will last until 2023 and will help borrowers deal with cash flow challenges caused by the pandemic.

According to the Executive Director at Shapoorji Pallonji & Company, the Rs 4,400 crore value is for the full interest in the company, which includes the open offer valuation cost. But, because the demerger process is pending before the Mumbai bench of the National Company Law Tribunal, he too did not provide a date for completion.

According to reports, the deal also reflects the company’s stated goals and strategy of considerably de-leveraging and focusing on core skills and operations. Eureka Forbes is a pioneer in the fields of water purifiers, vacuum cleaners, air purifiers, and home security systems. In 2020, it reported yearly sales of over Rs 3,000 crore.

After the Tatas objected to pledging a portion of their substantial holdings in Tata Sons, SP Group put the asset on the market in November 2019 to raise funds. The Supreme Court has yet to rule on this case. Advent was up against Warburg Pincus and Electrolux, a Swedish home appliance company with which it had a long-running joint venture from 1982 until 2001.

ZCL Chemicals, a prominent maker of active pharmaceutical ingredients and advanced intermediates; RA Chem Pharma, a forward-integrated diversified API player; and Aditya Birla Capital, Aditya Birla Group’s financial services holding firm, are among its recent investments. Since its inception in 1984, the fund has invested $56 billion in over 380 firms across 42 countries, with $75 billion in assets under administration as of March 2021.

What areas does Shapoorji Pallonji Group operate in?

What is the value of a controlling interest in a company?

If a shareholder or group of shareholders own the majority of a company’s shares, they have a controlling stake. A controlling interest in a corporation is usually held by an individual or group that owns 50 percent plus one of the company’s stock.