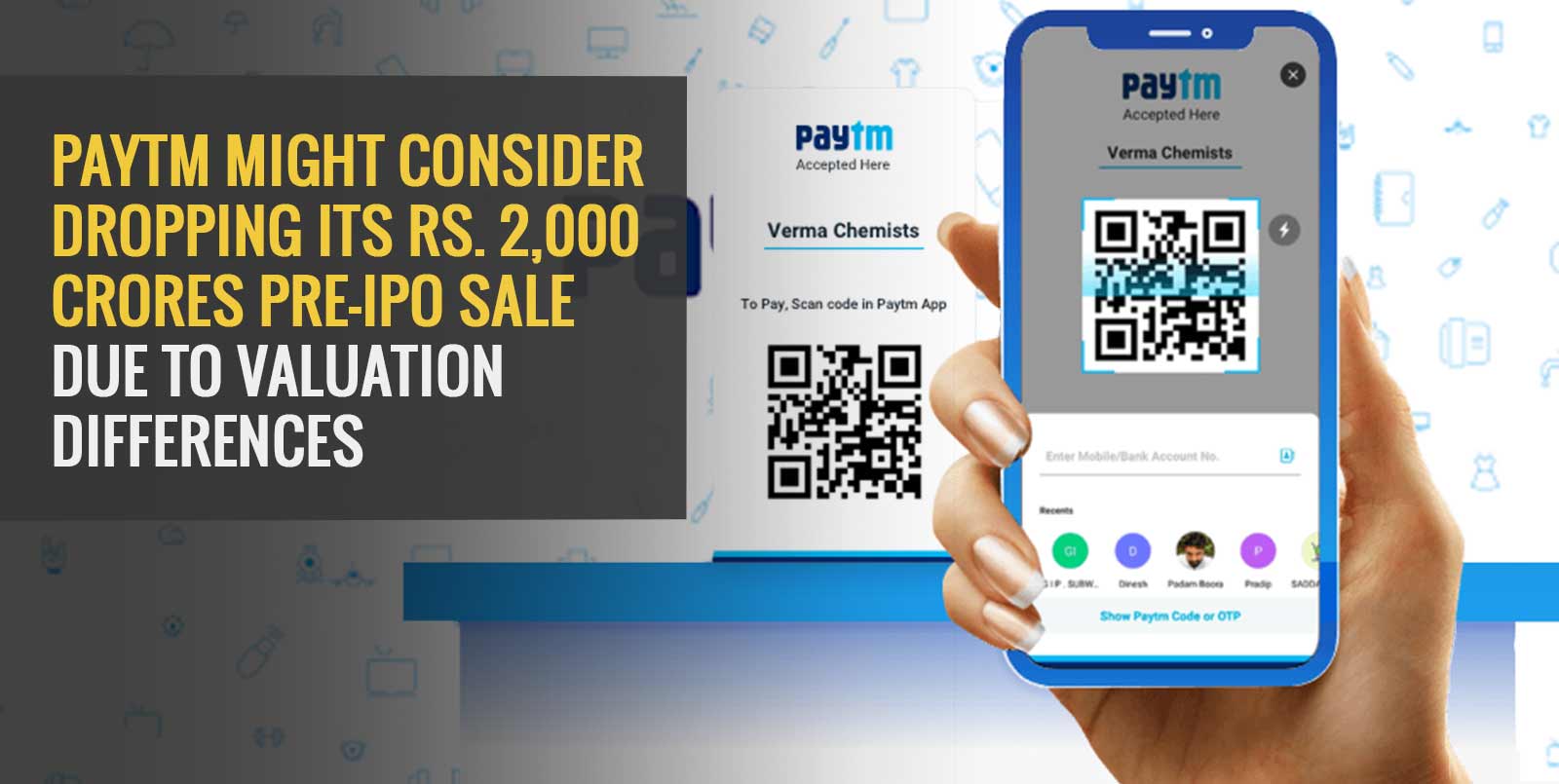 India’s leading digital payment platform, Paytm, is mulling to scrap its pre-IPO share sale worth around Rs. 2,000 crores ahead of its planned IPO. As per people familiar with the internal developments, valuation differences have compelled Paytm to reconsider its decision for a pre-IPO sale.

Paytm might choose to avoid the pre-IPO share sale and go direct for its initial public offering next month. However, the company is yet to take a final call regarding the issue.

Let’s find out more about this.

A Close Look Into the Matter

Based on feedback from its investors, Paytm has been looking for a valuation of $20 billion. However, advisers handling the IPO suggested lowering the pricing. Paytm was last valued at $16 billion.

The digital payment platform has been hoping to tap into the massive investor demand that has been propelled by easy liquidity. It reported a significant 10% drop in its revenue for the period ending March 2021 due to increased competition from Amazon and Walmart-backed Flipkart.

Although a final decision is yet to be taken by the upper management, the company probably would opt for a pre-IPO share sale at a lower valuation.

Is There Really a Valuation Difference?

Reports have been circulating lately that Paytm would consider shelving its pre-IPO share sale owing to valuation differences. However, as per certain sources aware of the developments, this might not be entirely correct.

Sources close to the company say that there aren’t valuation differences between the investors and management of Paytm. Paytm might choose to directly head for its IPO in order to adhere to its predetermined IPO timeline.

IPO Approval Expected Within Next Week

Paytm filed its Draft Red Herring Prospectus for its Rs. 16,600 crores public offering on 16 July 2021. This IPO would be a combination of both offers for sale by its existing shareholders and the issuance of fresh equity shares. The offer for sale would include shares worth Rs. 8,300 crores, while the issue of fresh shares would worth another Rs. 8,300 crores.

It would be using the proceeds fetched from the public offering to fund partnerships, acquisitions and other growth-oriented policies. Moreover, the company is looking to meet its general corporate expenses.

Reports suggest that SEBI might approve Paytm’s Rs. 16,600 crores IPO by next week. If things go as per plans, Paytm will launch its public offering either before Diwali or right after that. However, the company would finalise the launch date after receiving the approval.

As per the DRHP, the company might consider issuing further equity shares, which might include a private placement of shares worth Rs. 20,000 million. However, this would take place solely at the discretion of the management.

Regardless of whether the pre-IPO share sale takes place ahead of its IPO, Paytm is on track for a timely IPO launch.

To stay updated about the regular developments in the IPOs taking place in India, make sure to take a look at Angel One blogs.

The opening and closing dates are not yet finalised. However, it will take place either before or after Diwali this year.

Paytm IPO will be listed on BSE and NSE.