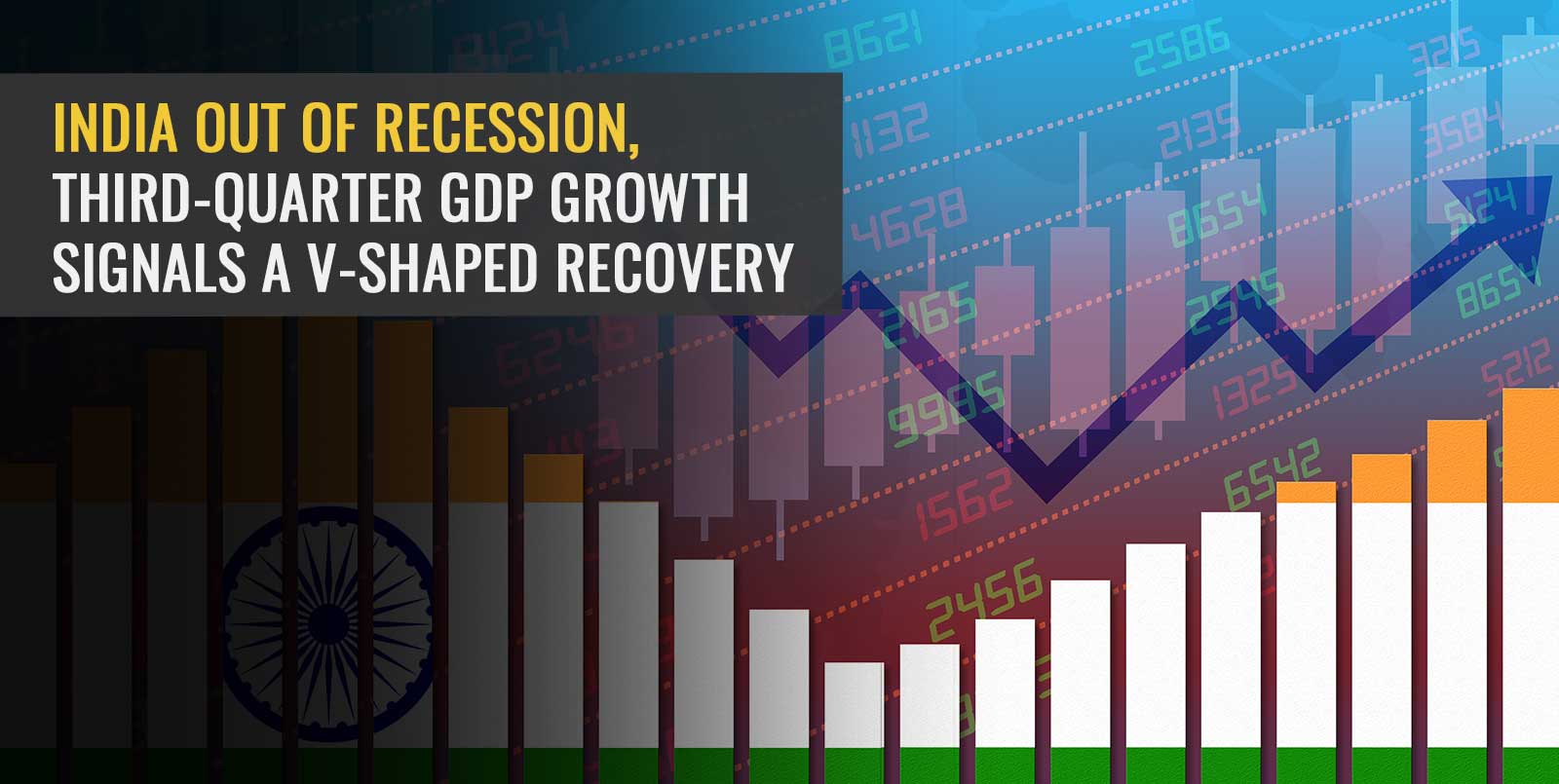 India’s economy is out of a technical recession and returns to the growth path in the third quarter of FY 2020-21, with a 0.4 per cent increase in the Gross Domestic Product. This comes on the back of a huge 24.4 per cent contraction in the June quarter, following a pandemic-associated lockdown. The September quarter saw an improvement and the contraction was by 7.3 per cent in that period.

According to the National Statistical Office (NSO) data, the GDP is expected to face a contraction for the full year 2020-21 of 8 per cent, vis-a-vis the earlier forecast of a 7.7 per cent contraction.

The third-quarter GDP data was a sign of a V-shaped recovery on the way, according to the Finance Ministry, although it sounded a note of caution about the persistent pandemic-related risk. The 0.4 per cent estimate is much higher than the Reserve Bank of India’s projection of 0.1 per cent, made in December 2020. The RBI had also estimated that the Q4 GDP would be around 0.7 per cent. It expected the GDP to contract by 7.5 per cent for the current fiscal.

Although the GDP is now in positive territory, the important figure is the gross value added or GVA. The GVA is seen as shrinking 6.5 per cent (-6.5 pc) in the current fiscal as against the previous estimate of 7.2 per cent contraction. The GVA is the value arrived at when the GDP figure is adjusted for subsidies and indirect taxes.

On the sectoral front, agriculture, manufacturing, electricity and public utilities, and construction, have registered growth compared to the second quarter. Electricity and public utilities, for instance, rose 7.3 per cent compared to 4.4 per cent in Q2. Manufacturing also registered a growth of 1.6 per cent following a 1.5 per cent drop in the second quarter. Similarly, construction went up 6.2 per cent in the third quarter as against a contraction of 7.2 per cent in the earlier quarter. The construction sector growth rate has been heartening as this is the highest in the past eight quarters. This also reflects the revival of economic activity, following the easing of restrictions and drop in Covid-19 cases.

A positive development has been that gross fixed capital formation, which reflects private investments, has gathered momentum and grown 2.6 per cent in the third quarter. It may be recalled that GFCF had contracted by a little over 46 per cent in the first quarter of FY 2020-21. Festive consumption and the capital formation number seem to have brought the GDP back on the growth path. Revised estimates of capital expenditure for FY2020-21 show a rise of 6.55 per cent, which has also helped the recovery of GDP.

Meanwhile, core infrastructure sector output has risen slightly by 0.1 per cent in January 2021, on the bank of improved performances on three sectors: steel, fertiliser and electricity.

How will the markets see the Q3 GDP data?

On the market front, the last trading day of February saw the Nifty 568 points lower at 14,529 levels while the Sensex shed 1939 points to touch 49,100, owing to rising US bond yields and India’s own bond yield going up to 6.23 per cent. Foreign portfolio investors turned net sellers on February 26, selling shares worth over Rs 8295 crore, according to provisional data.

In early trading on March 1, Sensex and Nifty have both gained as the bond markets settle down. The Q3 data shows an improvement although economic revival has been bumpy overall. Corporate earnings have seen their best performance in the past quarter. According to media reports, the net profit of over 3300 listed firms that have declared their results had risen over 68 per cent year on year, for the third quarter.

Markets have been buoyant for a major part of February over the Budget announcements and good corporate earnings. The drag was largely owing to the rising bond yields and fears of inflation. The Q3 results are encouraging amidst a fresh phase of vaccine rollout, which is expected to pick pace.

The market, which has been in a correction phase over the last week, can take heart from factors such as a rise in gross fixed capital formation (GFCF), improved gross value added (GVA) number and a continued expansion of manufacturing activity,  which indicate signs of an economic recovery.