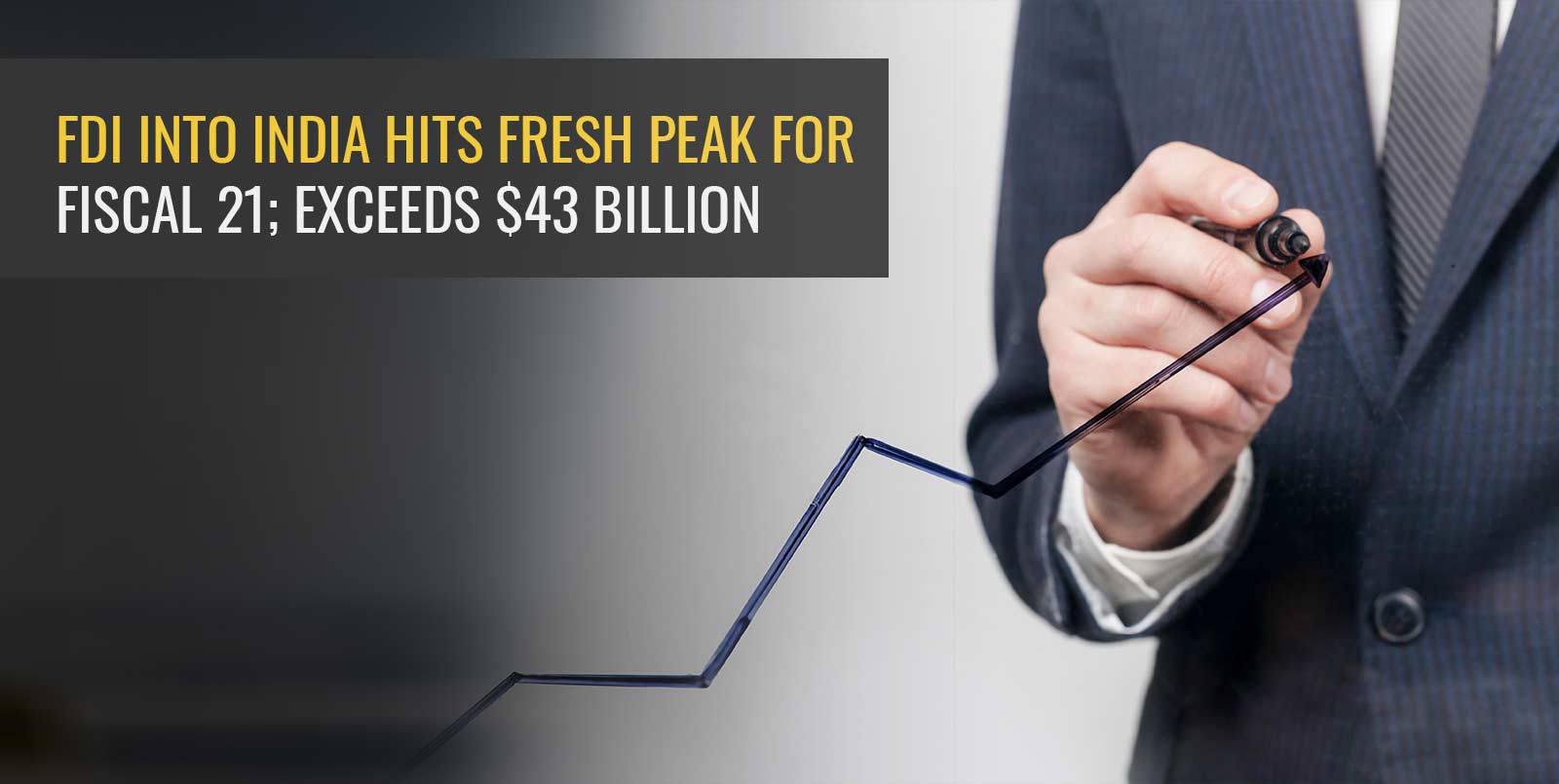 Even as the pandemic struck India in 2020 and there was an economic slowdown, foreign direct investment into India was unabated. In the financial year 2020-21, the overall FDI inflows hit a new peak of $43.366 billion, beating the earlier record of $43.013 in the previous financial year.

The data, released by the Reserve Bank of India, showed that investment to India in the fiscal year 2021 was at $54.665 billion but foreign direct investment by India added to $11.299 billion, leading to the $43.336 billion net FDI.

The RIL group’s sale of stakes, raising $35 billion in the fiscal year accounted for 64 per cent of the overall FDI inflow for India, as it brought in international investors such as Google and Facebook.

Increase in FPI and forex reserves

Foreign portfolio investments (FPI) has also risen in the fiscal year ending March 2021. The inflows into equities and debt added up to $36.18 billion. This was the second highest net FPI inflow after the fiscal year 2014-15 when India had received $45.6 billion by way of net FPI inflows.

As a result of the significant FDI and FPI inflows into India, the country’s forex reserve has also risen. In the fiscal year ended March 2021, forex reserves shot up by more than $100 billion to touch $576.8 billion in the week ended April 2.

FDI into India: A closer look

Looking at the split-up, the sectors that have drawn the most inflows include IT, telecom, pharma and digital economy. Also, the states that have contributed to 90 per cent of the inflows received in the first nine months of the fiscal ended March 2021 were Gujarat, Maharashtra, Karnataka and National Capital Territory of Delhi.

Also, according to government data, Singapore was India’s largest source of FDI for the period between April 2020 and January 2021. The city-state’s share of the total FDI equity inflow was a little over 30 per cent, followed by the US at a little more than 24 per cent. For the month of January 2021, Japan was India’s largest investor country with more than 29 per cent of the overall equity FDI inflow. The sectors that had the highest inflow for the April-Jan period include computer software and hardware at nearly 46 per cent followed by infrastructure related activities at over 13 per cent and the services sector at a little under8 per cent.

An UNCTAD (UN Conference on Trade and Development) report from January 2021 shows that FDI in India went up by 13 per cent in 2020, on the back of investments in the digital sector. These include digital payments and e-commerce platforms. The UNCTAD report notes that inflow of FDI in the developed world including the US and some European nations dropped.

One of the reasons for the strong FDI inflows into India has been the liquidity injected by central banks across the globe, apart from the economic recovery India saw just before the second wave hit the country. According to the RBI’s recently released ‘State of the Economy’ report, even the second wave has not had a debilitating effect on economic activity in the first half of the 2021-22 first quarter. The FDI inflow trend is expected to continue through this calendar year as well, because experts note that investors take a multi-year approach to their investments.

Another reason for the strong FDI inflows has been the production-linked incentive scheme that the government announced for various sectors, apart from the privatisation push of the government. In the Union Budget 2021-22, the PLI scheme was extended to 13 sectors such as IT, pharma, telecom and auto among others. Earlier, the government had offered the PLI scheme for the electronics segment which encouraged international brands to eye India and move some of their production units here.

Further the Union Budget also opened up the insurance sector by increasing the FDI ceiling from the earlier 49 per cent to 74 per cent, in a bid to boost FDI inflows into this sector.

The net FDI into India touched a new peak of $43.336 billion in the fiscal year ending March 2021, as it outpaced the earlier fiscal year’s high of $43.013 billion, in spite of the pandemic. Foreign portfolio investments have also seen strong inflows of $36.18 billion for the fiscal 2020-21, resulting in an increase in forex reserves for the country.