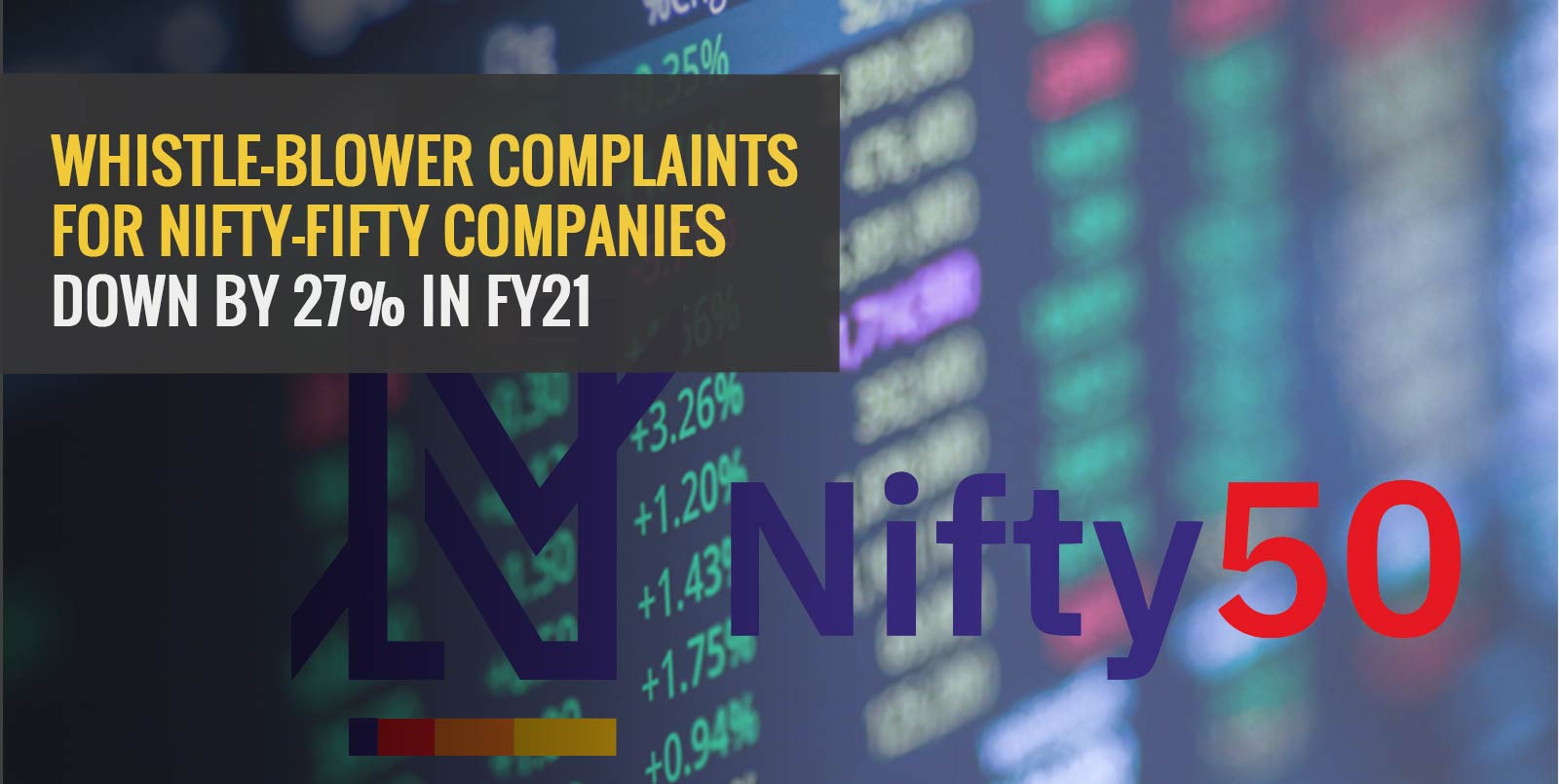 In addition, the study found that the number of companies disclosing their complaints increased to 24 in FY21 from 19 in the previous fiscal. According to some experts, this could be a sign of improved corporate governance or an expected decline due to decreased business interaction and transactions, according to others.

Let us take a dive into whistle-blower complaints in India and its current state.

Reasons for Reduction in Complaints

A decline in business interactions and transactions due to the Covid-19 pandemic could be a reason behind the reduction in whistle-blower complaints. However, there has been an increase in complaints in listed companies, especially when there is an M&A transaction. Cases of financial window dressing, siphoning money and issues with financial reporting have also increased.

While cumulative complaints disclosed have decreased from 5319 to 3902, companies like Cipla and Hero MotoCorp have reported higher whistle-blower complaints. Some experts consider this increase to be a good sign as it indicates sound corporate governance.

According to these experts, auditors, directors and board members are taking a more proactive approach to deal with complaints. On the other hand, companies with zero whistle-blower complaints may not have a good whistle-blowing mechanism in place.

The Current State of Whistle-blower Protection in India

Most experts consider that whistle-blowers play an integral role in encouraging transparency and accountability. According to the Association of Certified Fraud Examiners (ACFE), nearly 40% of all reported frauds were detected through tips.

India provides statutory protections to whistle-blowers through various legislations and regulatory mechanisms. The Indian parliament passed the Whistleblower Protection Act in 2014 to protect whistle-blowers from reprisals.

The Act will provide safeguards to anyone who makes public disclosure of misuse of power, acts of corruption or criminal offences by public servants. It has received the President’s approval but is yet to be implemented.

Additionally, the Companies Act 2013 and SEBI (Listing Obligations and Disclosure Requirements) Regulations 2015 requires listed companies to establish an effective mechanism to receive concerns and grievances of employees. The 2018 amendment to the Prevention of Corruption Act 1988 also introduced adequate defence procedures for allegations of bribery.

SEBI (Securities and Exchange Board of India) has introduced a reward scheme for informants reporting violations of insider trading laws. The CARO (Companies Auditor’s Report Order) 2020 is another recent update from the corporate affairs ministry changing whistle-blower laws.

This law will make it mandatory for listed companies to disclose all whistle-blower complaints received in a year to statutory auditors. The auditors will ask for details of these complaints and how the company addressed them.

Challenges of Being a Whistle-blower in India

The Whistleblower Protection applies only to public sector companies, but even there, it is far from perfect. The Act does not allow anonymous complaints, which makes it difficult to protect whistle-blowers as their identity becomes public. This raises serious concerns over the effectiveness of this law as there are many known instances of retaliation against whistle-blowers.

While the Companies Act 2013 provides certain safeguards for whistle-blowers, these measures are left entirely to the concerned companies. As the top management of most companies investigates wrongdoings, employees cannot make complaints against those above them.

Legislations regarding complaints in India are also vague and don’t dictate the manner of its application. This means there are no best practices that Indian companies need to follow to provide adequate protection to whistle-blowers. Moreover, companies don’t have effective mechanisms to distinguish between genuine and frivolous complaints.

According to a survey by Deloitte India, 50% of working professionals in Indian companies lack confidence about complaints mechanisms. In addition, around 2/3rd of employees doubt that their complaints would remain confidential.

Whistle-blowing mechanisms are crucial for large companies as they save them from regulatory risks. According to Deloitte India, whistle-blower mechanisms reduce fraud losses by 50% for companies. However, there is much scope for improvement for whistle-blowing programs for many reputed Indian companies.

Indian companies will need to implement whistle-blowing mechanisms that allow employees to report complaints anonymously. They will also need to train employees to use the channels to make internal reports without fear of retaliation.

Some companies appoint members like the head of HR or internal audit for their whistle-blower programs. In other cases, the ethics or audit committees are responsible for these programs.

The Ministry of Personnel, Public Grievances and Pensions has clarified that this law requires certain amendments before its introduction. Currently, the Act dilutes protection to whistle-blowers as it does not allow anonymous complaints.