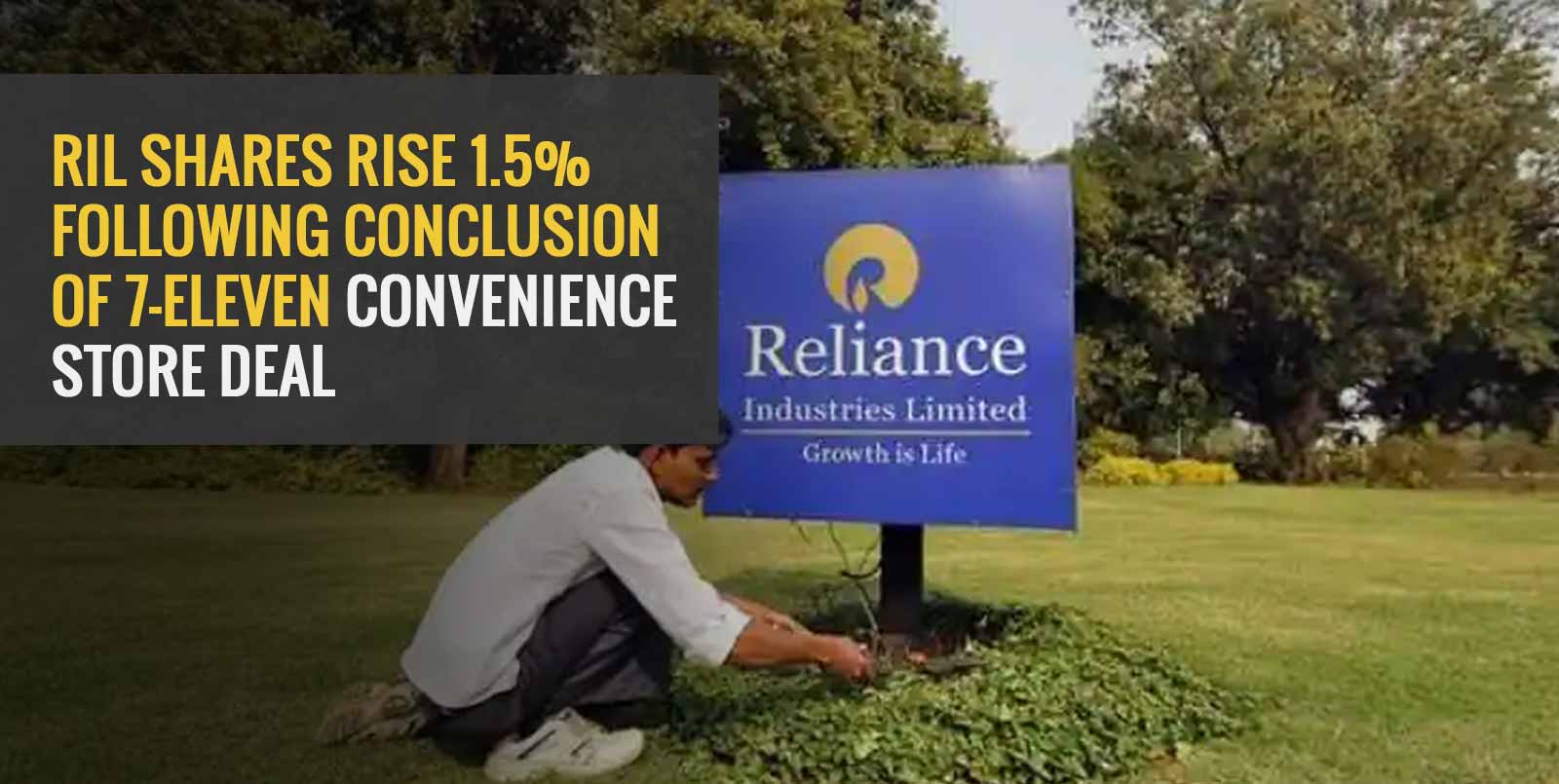 RIL (Reliance Industries Limited) shares gained more than 1% on 7 October 2021 following the successful conclusion of its subsidiary’s deal with 7-Eleven. Shares of RIL have risen around 22% in the last three months and generated around 148% of returns for the past three years.

RRVL (Reliance Retail Ventures Ltd) entered into a deal with 7-Eleven Inc. (SEI) to launch its convenience stores in India.  The companies will set up the first 7-Eleven store in Andheri East soon followed by a rapid rollout across key areas in Greater Mumbai.

The flagship company of the Reliance Group, Reliance Industries, is the largest private sector company in India. Founded by Dhirubhai Ambani in 1966 as a small textile manufacturer, RIL would become India’s first private company listed on the Fortune Global 500 list.

Over the years, Reliance Industries has become a petrochemical major and also entered into the telecom sector as Reliance Telecom Private Limited. Today, RIL operates the following business segments:

Who are the 7-Eleven?

The Southland Corporation, with capital from Ito-Yokado, rebranded itself as 7-Eleven in 1999. Since then, it has become the world’s largest franchisor, operator and licensor of convenience stores.

Today, the company operates and licenses around 77,000 stores in 18 countries and regions. It has operations in Asia, Europe and the Americas, including in countries like South Korea, Japan, Hong Kong, Mainland China, Philippines, United States, Canada, Norway, Sweden, Brazil and Australia.

A Brief Overview of 7-Eleven’s Deal with RRLV

Future Retail had a master franchise agreement with 7-Eleven. However, the companies recently terminated their agreement, citing Future Group’s inability to open stores or pay franchise fees. Just two days after this termination, 7-Eleven announced a tie-up with Reliance Retail to open convenience stores in India.

With this tie-up, RIL would strengthen its presence in the convenience store and groceries segment and can be a launchpad for its private labels. In addition to expanding its retail business, the move will help the Reliance Group to better compete with Amazon.com. The oil and telecoms company has a $3.4 billion deal stalled following Amazon’s legal actions.

Following the successful conclusion of the agreement, the companies will launch several stores, starting with the city of Mumbai. These will sell beverages, delicacies and snacks curated to local cuisines along with personal care goods and other daily use items.

According to the companies, this move will be very popular as it will bring 7-eleven’s unique products/services to Indian customers within their own neighbourhoods. With rapid expansion on the horizon, it may bring significant local development and build an ecosystem for convenience goods.

What Can We Expect From this Partnership?

Reliance Retail Ventures has been steadily improving its presence in the country, adding around 1500 stores last year. The latest development comes at a time when Covid-19 infections are at an all-time low, and the economy is slowly gaining normalcy.

This partnership may help Reliance gain a pan-India presence against rivals who are mostly regional.  It would also give them a platform to sell OTC medicines and provide an outlet for their various businesses. However, 7-Eleven stores could face competition from online delivery services like Swiggy, Grofers, Dunzo, etc.

Last year Future Group agreed to sell its retail assets to Reliance Retails, but the deal was challenged by Amazon.

The first 7-Eleven store will open on 9 October 2021 in Andheri East, Mumbai. Thereafter, multiple stores will be opened in key areas of Greater Mumbai.