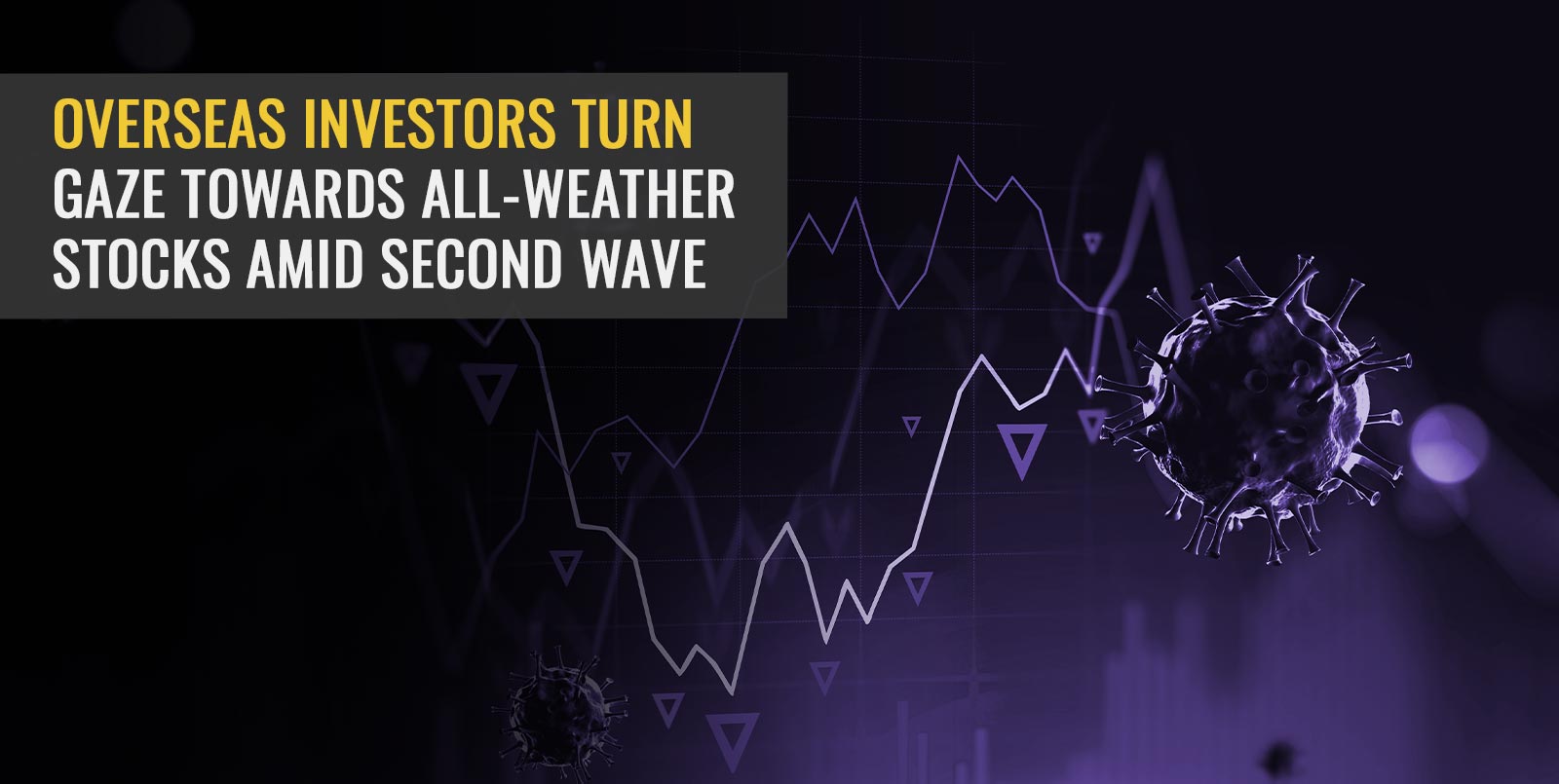 Foreign institutional investors (FIIs) are the key driver of equities in India. In the wake of the second wave of the pandemic in India, foreign investors have begun to look at defensive or traditional stocks such as IT and consumer staples. However, the peak of the second wave, vaccination progress and pace of economic recovery will decide where FII investments are channelised in the months to come.

FIIs were net sellers in April 2021 for the first time in six months and sold Rs 9,659 crore from equities in India in April, according to data from the depositories. In September 2020, FIIs had withdrawn Rs 7,782 crore.

Looking at the split-up of FII outflows in April provides insights into the sectors FIIs are not keen on at the moment. Banking and financial sector saw the largest outflow at $1.12 billion, followed by oil and gas at $466 million and metals and mining at $242 million, according to data from depositories. Foreign institutional investors also shed stocks in the auto sector, selling a little over $140 million and pharma and logistics in the $60-million range.

Talking about the banking sector, Bank Nifty dropped nearly 3 per cent in April. It may be recalled that banking and financials were the leading contributors to the benchmark indices in February, as a result of the Union Budget. In that scenario, FIIs had invested nearly $1.96 billion in BFSI stocks, accounting for almost half the inflows from them into the markets.

Sectors with most foreign inflows

The sectors that have received maximum inflows are fast-moving consumer goods (FMCG) and IT. Foreign investors bought consumer stock worth $376 million or Rs 2800 crore and IT stocks worth $201 million or a little over Rs 1500 crore in April. The FMCG sector, the fourth largest sector in the economy, saw a combined amount of over $500 million for the two months of March and April. The Nifty FMCG Index has outperformed Nifty 50 by 4.3 per cent in April. The move by FIIs to the FMCG sector shows that overseas investors are turning ‘defensive’ because of the second wave.

Defensive or traditional sectors are those that have a round-the-year demand. Overall, the defensive sector share in the equity assets under management (AUM) touched 30 per cent in April-end, which was an increase of 169 basis points from the middle of February, according to reports. The total equity AUM with reference to foreign portfolio investors (FPIs) dropped 5 per cent to touch $547 billion from the February peak. The defensive sectors AUM increased by 2.3 per cent to touch a little over $90 billion.

IT and FMCG: Defensive play by overseas investors

The IT sector has been experiencing growth and resilience as a result of digital transformation of companies across the globe and an increase in cloud adoption. They have seen many large deal wins in the quarter ended March 2021; earnings season for the fourth quarter has also shown impressive performance by IT companies in India. These factors have meant that the Nifty IT index has outperformed the Nifty50 Index by nearly 5 per cent in the March 2021 quarter. Reports also suggest that FPI investment in the IT sector rose after solid results by the top five software export firms and an overall deal win for the sector worth nearly $12 billion.

Even during the first wave of the pandemic in 2020, the sector that rallied first was the consumer goods sector. FPIs invested a little over Rs 19,000 crore in the FMCG sector between April 1 and May 15 in 2020, in spite of the stringent nationwide lockdown at that point in time. The BSE FMCG and consumer discretionary goods and services indices added 11 and 18 per cent respectively towards the end of 2020. In 2020, BSE IT and Healthcare indices gained by 57 per cent and 61 per cent.

The Indian equities gained over Rs 1.6 lakh crore or $23 billion from foreign institutional investors in 2020, which was the highest among emerging markets, for the second year in a row. Although FIIs have turned net sellers in April amid the second wave, on the brighter side, for the first time in May, FIIs turned buyers on May 6, as they bought shares worth over Rs 1200 crore. The reason for the streak of optimism has been US President Joe Biden’s decision on the vaccine front — the US has decided to waive intellectual property rights for vaccines. This comes as a boost for India’s vaccine progress.

Foreign institutional investors (FIIs) are turning to defensive stocks like IT and FMCG, as the second wave of the pandemic surges in India. The sectors that have been impacted seem to be auto and banking, owing to the defensive play of overseas investors.