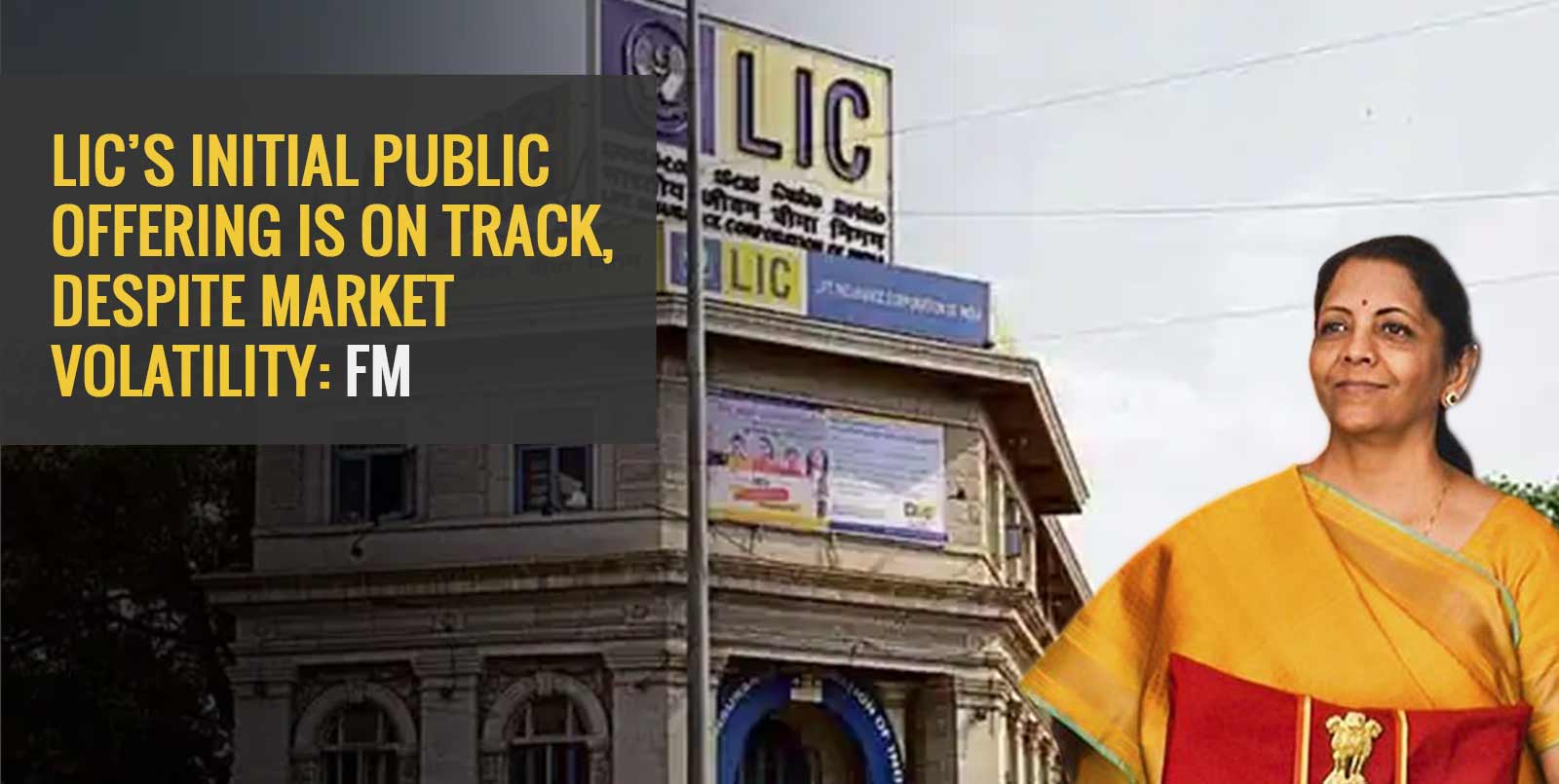 Despite market volatility and geopolitical worries, Finance Minister Nirmala Sitharaman stated on Tuesday that the government will proceed with the initial public offering of Life Insurance Corporation of India.

“There is a buzz in the market and there is demand for the LIC IPO,” Sitharaman said, declining to comment on whether the IPO may be delayed. “We’ll go ahead and do it. We are equally concerned whether the market condition is favorable,” she continued.

The FM went on to say that market volatility was due to global issues, and that the government was keeping a close eye on the Russia-Ukraine situation. The minister said the spike in oil prices, which are approaching $100 a barrel, is a problem.

Bonds surged further on Tuesday as the central bank announced its weekly bond auction, after a rise since the RBI’s monetary policy announcement. Because the government’s finances were in good shape, the RBI decided to suspend its bond auctions.

In response to the government’s decision to postpone weekly bond auctions in the previous two weeks, economic affairs secretary Ajay Seth stated that the government has not borrowed via bonds since its cash position is strong and there is no need to borrow. “It’s a dynamic environment,” Seth added, “and there will be no shocks in terms of auctions.” According to RBI statistics, the government has raised Rs 10,525 crore so far this month, compared to a target of Rs 95,000 crore for the month.

On the NSE matter, the FM said that the government was investigating corporate governance failures at the exchange and that the ministry would arrange a press conference as soon as all the information was sorted out.

The CBI has questioned Anand Subramanian, former group operating officer of the NSE, and Chitra Ramakrishna, former MD and CEO of the exchange, since the SEBI decision on February 11. According to reports, the CBI also paid a visit to the SEBI headquarters in Mumbai.

After canceling government bond sales twice this month, the government has decided to proceed with the Rs 23,000 crore bond sale slated on February 25. According to experts, whether the government continues with the bond sale in March would be determined by the size and scheduling of the IPO of public sector insurer Life Insurance Corporation of India.

The administration had already announced that it will postpone two government bond auctions planned for February 7th and 14th due to a lack of funds. The postponement of bond sales aided in lowering 10-year government bond rates, which had risen to 6.9% in the first half of February.

10-year government bond rates are now trading at roughly Rs 6.75 percent. In 2021-22, the government intends to generate Rs 8.75 lakh crore via bond and treasury bill sales. However, a lot will rely on the size of LIC’s initial public offering, which is expected to be launched on the stock exchanges in March.

Though the government has been tight-lipped about the amount of the issuance, market speculation suggests that it would be in the region of Rs 60,000-70,000 crore. Disinvestment is expected to raise Rs 73,000 crore for the government. It has barely raised Rs 12,000 crore so far. If the government can raise more than Rs 70,000 crore, it may not need to borrow as much as it had projected.

Despite expectations of a negative adjustment, the government has increased the budget deficit goal for the current fiscal year from 6.8% to 6.9%. Officials from the Finance Ministry told TNIE that the higher adjustment in the budget deficit was due to the spending departments’ confidence, which requested for additional cash to be spent in the fourth quarter.