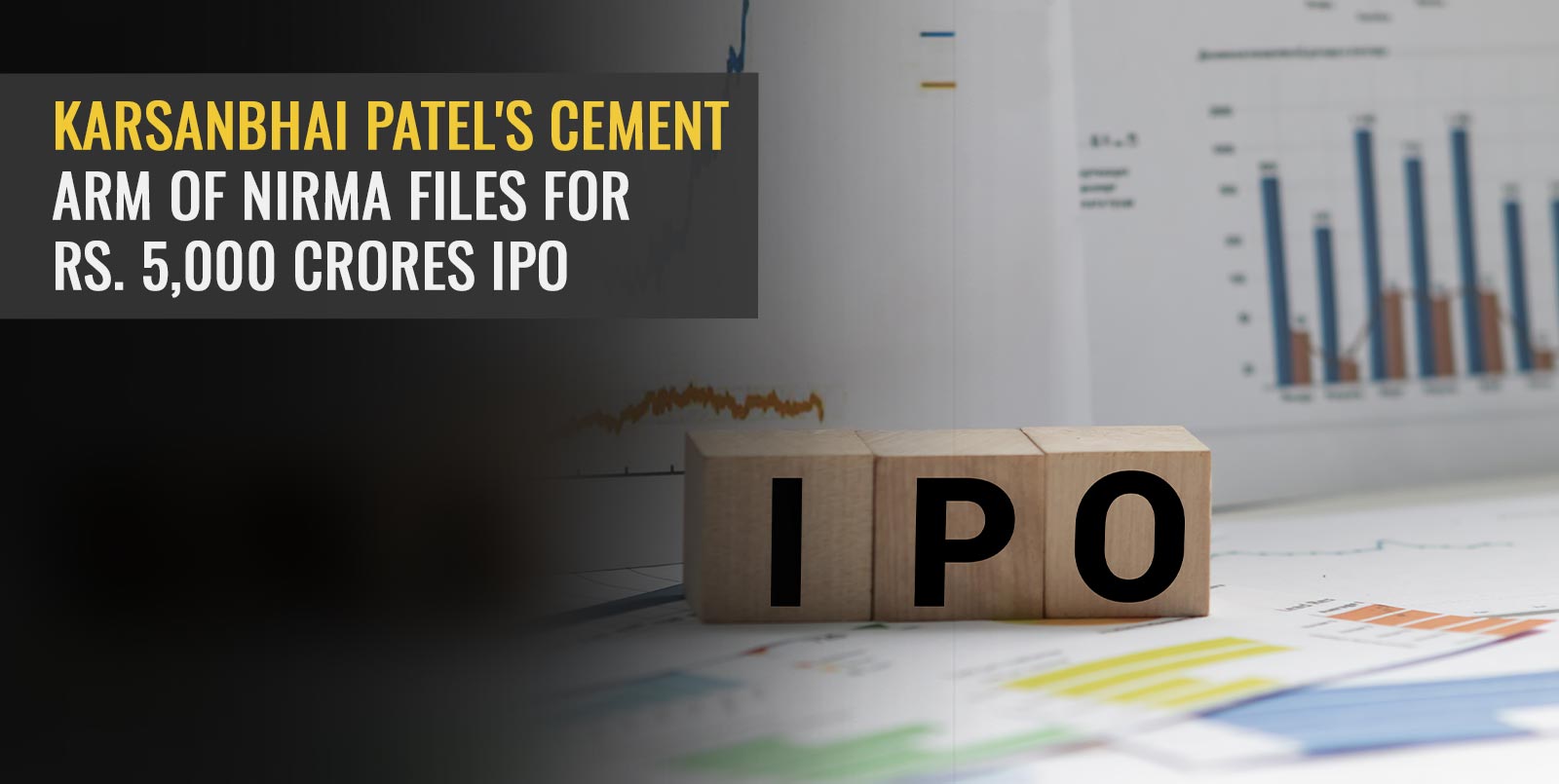 The Nirma Group, founded by billionaire industrialist Karsanbhai Patel and known for its famous washing powder label, is making a major comeback to the domestic capital markets. Nuvoco Vistas Corporation Ltd, the Ahmedabad-based group’s cement arm, has filed its DRHP with SEBI to raise about Rs. 5,000 crores via an IPO, nine years after Nirma Ltd was delisted from the stock exchanges. The move is important for the sector because it will bring an end to a nearly 14-year drought of cement listings in India, with the last one coming in November 2007 from Burnpur Cement.

Nuvoco Vistas has shocked the local cement market with its impressive marketing strategy in the last five years, just like Nirma shook up MNCs in its heydays in the detergent segment. In 2016, the company outbid heavyweights like the JSW Group and the Piramal Group for LafargeHolcim’s coveted Indian assets, paying $1.4 billion. It signed a $770 million deal in February 2020 to buy the debt-ridden Emami group’s cement assets.

According to the company’s annual report for FY 19-20, it had a total production capacity of about 14 million tonnes per year, with 7 cement plants and 60 ready-mix concrete plants. After a long period of silence in the cement industry, this is a significant offering. The entire company will be valued at about Rs. 40,000 crores in the IPO, which will be higher than any of its heavyweight listed peers. The company’s plants are strategically situated near raw materials and have strong road and rail connectivity.

The proceeds of the IPO will be used to repay debt incurred as a result of the twin acquisitions and to boost the firm’s capital structure, which is expected to expand steadily in the coming years. Commodity prices are increasing, and the government’s infrastructure spending is a bonus for such an offering. As of now, the preliminary plans are to launch the IPO in June or July. Nuvoco Vistas had Rs. 4,463 crores in debt as of March 2020. Investment banks ICICI Securities, Axis Capital, JP Morgan, HSBC Securities, and SBI Capital are acting as advisors on the IPO, according to the DRHP.

Nuvoco’s critical scale, supremacy in the eastern market, and proven brand in slag cement, which provides higher margins, are its strengths. Since its acquisitions were made at a high premium, it may take longer for return metrics on equity to catch up to peers. Given the low base and sharp recovery in cement demand driven by higher government spending and a strong rural economy, investors think the cement sector will report strong double-digit volume growth in fourth quarter of FY21.

Hiren Patel, Karsanbhai Patel’s son, is the chairman of Nuvoco Vistas and is widely regarded as the change agent at the low-profile Nirma Group, having led the company’s recent diversification and acquisition strategy. He joined Nirma Limited as a Director in 1998 and became the company’s Managing Director in 2006. Under his leadership, the company has evolved from a consumer products company to a diversified conglomerate with interests in chemicals, cement, real estate, and healthcare. Patel is a philanthropist and a member of the Nirma Education & Research Foundation’s Managing Committee, which oversees Nirma University.

Lockdowns were introduced as the pandemic wreaked havoc around the world, causing major supply chain disturbances. Despite numerous threats, the cement industry has shown resilience. It has maintained a steady growth rate over the last few years as a result of increased infrastructure investments. The government continues to concentrate on infrastructure growth with the aim of making India a $5 trillion economy by 2025, according to Hiren Patel in the firm’s FY19-20 annual report.

Cement, ready-mix concrete, and new construction materials are the three industry verticals of Nuvoco Vistas. Concreto, Duraguard, Nirmax, and Infracem are among the premium cement brands. Cement plants owned by Nuvoco Vistas can be found in Chhattisgarh, Rajasthan, Haryana, Jamshedpur, and West Bengal.

The ready-mix industry provides specialised commodities such as Artiste and InstaMix, which have been used on projects such as Lodha World One, Amritsar Entry Gate, and metro trains. Construction additives, multipurpose bonding and waterproofing agents, wall putty, tile adhesive, ready mix dry plaster, and cover blocks are among the modern building materials products available under the Zero M and InstaMix labels.