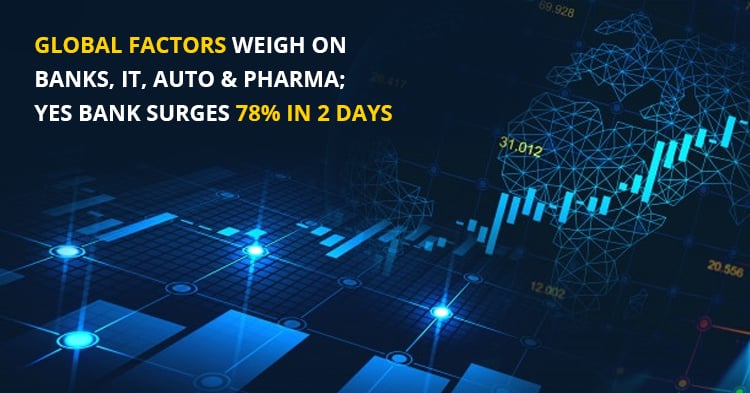 On March 11th, Sensex closed at 35,697.40, which was 62.45 points higher from its open. Following suit, Nifty also closed 6.90 points higher at 10,458.40. These positive-to-flat closes have officially broken Sensex and Nifty’s two-day losing streak, which was primarily driven by the novel coronavirus pandemic. Although upcoming global fresh cases of the novel coronavirus are expected to generate market volatility in the coming weeks, here’s what experts are saying regarding the future status of the market.

On a technical front, Nifty created a bullish candle and respected Monday’s low of 10,294 levels. The three levels for Nifty are 10,800, 10,545 and 10,294. If Nifty consistently manages to trade over 10,550 levels in the next session, experts argue that it can eventually challenge the bearish gap which was created on March 9th. This gap is present in the 10,751 to 10,827 level. However, if Nifty breaches the 10,295 support level, it will enter a critical support zone between 10,100 and 9,850. The general recommendation from experts is that directional bets may be avoided during this time.

However, nibbling in selective sound stocks as a long-term portfolio investment is advisable. This expert consensus has been elaborated upon by Kotak Securities’ Head of Research in Derivatives; Sahaj Agrawal. According to Sahaj, the last few trading sessions leading up to Manic Monday (Mar 9th) have shown a lot of market volatility. So, traders should expert bound movement for upcoming weeks before the market decides on a fixed course of action. During this time, Nifty and Sensex heavyweights are currently available at attractive valuations which are worth getting your hands on for the long-run. These include the likes Bluechips like ITC and Tata Steel.

Agarwal claims these heavyweights are worth your investment because Nifty has powerful long-term support at the 10,000 to 10,100 levels, which can even be held for the medium-term. Other experts have a more skeptical perspective on the performance of the Indian stock market indices on Monday. According to Ajit Mishra, the Vice President of Research at Religare Broking, Nifty and Sensex’s positive close may just be an immediate response to the sharp 2-day slide they experienced. These positive numbers may need global market support to continue as a positive streak.

Mishra believes “further bounce” may be difficult to observe considering the fresh cases of nCoV growing worldwide. His recommendation for traders is to limit taking leveraged positions and opt for hedged bets instead. However, for investors, he advises continuing to buy fundamentally sound stocks in a more staggered manner, as opposed to bullishly. Most experts are generally optimistic regarding the outlook of long-term investments. This sentiment is based on the recent performance of large-cap stocks like Yes Bank, Bharti Infratel, Zee Entertainment, Hero MotoCorp, and Coal India which were top gainers on NSE on Monday. Yes Bank, in particular, turned a lot of heads.

On March 11th, the share price of YES Bank stock climbed over 36% to ₹29.45 becoming the top gainer on Nifty. On BSE, it closed 35% higher than its open at ₹28.80. This has happened after SBI publicly announced that it will pick up a 49% stake in YES Bank, supported by a government-approved bailout plan. This plan aims to infuse the crisis-ridden YES Bank with ₹2450 crore. Until then, YES Bank has been ordered to remain under moratorium by RBI until 3rd April. During this interim period, YES Bank customers are not permitted to withdraw more than ₹50,000 from accounts.

This government-plan has garnered the support of traders and YES Bank’s moratorium is expected to end within the week after March 11th. Other top gainers on Nifty included Lakshmi Vilas Bank and Granules India. Lakshmi Vilas shares garnered support and rose by almost 5% on Monday after the announcement that Kotak Mahindra will acquire a majority of the stake in it. On the other hand, Granules India’s shareholders approved its buyback which is worth ₹250 crores. This led to its share price also gaining by 5% on Monday.

When it came to the top Nifty losers on March 11th, Tata Steel came out on top. Its share price closed 7% lower than its open on Monday. The company’s CEO, Henrik Adam, announced that Tata Steel plans to slash around 1,250 jobs. He adds that the company is currently facing challenging financial circumstances and must urgently raise its profitability using this as a turnaround push. Sector-wise performance on Monday shows that all performed lower except for FMCG. Both BSE Smallcap and well as BSE Midcap also performed lower on Monday.