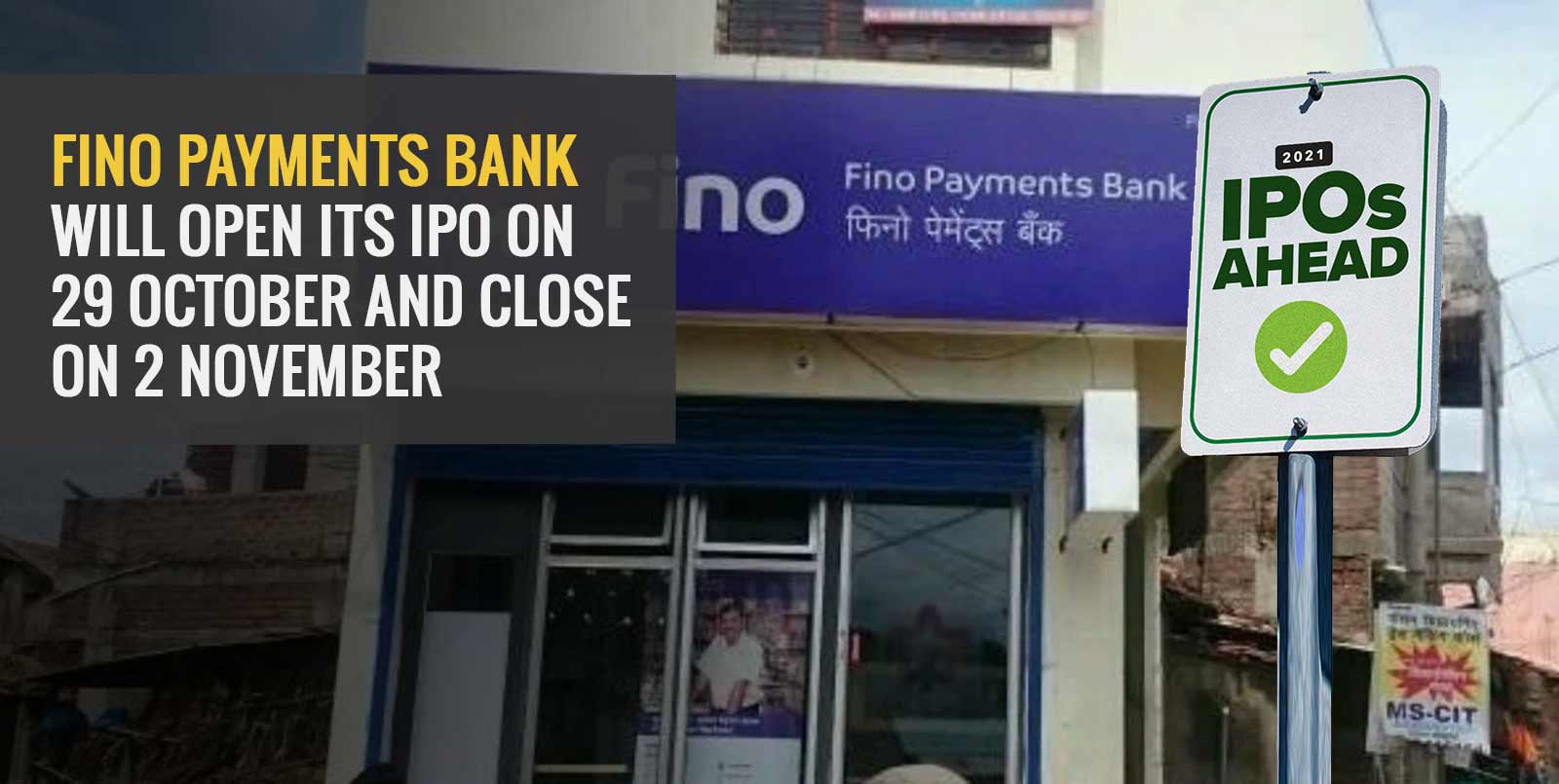 Fino Payments Bank Ltd. will be opening its initial public offering (IPO) on 29 October and closing on 2 November 2021. This IPO will consist of freshly issued equity shares of Rs. 300 crores and an OFS of 15.6 million shares by the existing stakeholders.

The fintech company may consider a pre-IPO placement of up to Rs. 600 million after consultations with the book running lead managers. This will reduce the size of fresh issue.

Let us look into the details of this IPO and the company behind it.

As a scheduled commercial bank, it offers a diverse range of digital and payments services/products. Incorporated in 2017, this growing fintech company has a pan-India merchant network and targets an underserved population of India. This includes those with low levels of financial literacy and lack of access to basic banking services.

Currently, the bank has a presence in 94% of all districts in the country, with over 54 branches and around 6.4 lakh banking outlets.

Fino Payments Bank’s merchant model includes a capital-light business strategy in respect of network expansion. It provides referrals to third-party loan providers but does not offer any lending products. In this way, it does not hold credit risk for loans.

Fino Payments IPO at a Glance

The objective of the IPO is to augment this fintech’s Tier I capital base. It will also be used to meet certain IPO-related expenses. For FY21, Fino Payments’ Tier I capital ratio was at 56.25%, an amount that the company wants to increase to meet future capital requirements.

The book running lead managers to this issue includes:

Fino Payments might consider a pre-IPO placement after consulting the BLRM, which will reduce the size of fresh issue to the extent of the placement. According to the DRHP, the offer will also include a reservation of equity shares worth Rs. 3 crores for employees.

The promoter of this IPO is Fino PayTech Limited, which owns 100% of its shares. Fino Payments also has the backing of marquee investors like ICICI Group, Blackstone, IFC, Bharat Petroleum etc. The registrar of this issue is KFintech Pvt. Ltd.

Financial State of the Company

As of FY21, the Fino Payments’ platform had 2.6 million bank accounts and facilitated around 435 million transactions. It saw an annual throughput volume of Rs. 1.3 trillion and cash withdrawal of Rs. 562 billion via MATM and AePS.

The bank opened 2,97,774 new CASA (Current Accounts and Savings Accounts) accounts in the quarter that ended in September 2020. This was a 20% increase in new CASA accounts from the previous quarter. The fintech also saw its deposits increase by 106.6% to Rs. 2.43 billion in FY21.

Let us take a detailed look at their finances. (All figures in Rs. millions)

Fino Payments Bank has observed a surge in banking transactions following the pandemic-induced lockdown. As a result of government relief, it recorded high levels of transactions and opening of CASA accounts. Its banking operations also saw a boost due to a large number of people trying to access government grants.

The company has more room to expand as its target addressable market offers Rs. 0.85 trillion potential revenue in the future.

The company primarily depends on fees and commissions from merchant networks and commercial relationships for revenue generation. Its main target customer base is the financially illiterate people of India.

The face value for the Fino Payments IPO is Rs. 10 per share.

If you successfully buy shares of this IPO within the closing date, these will be credited to your Demat account on 11 November 2021.