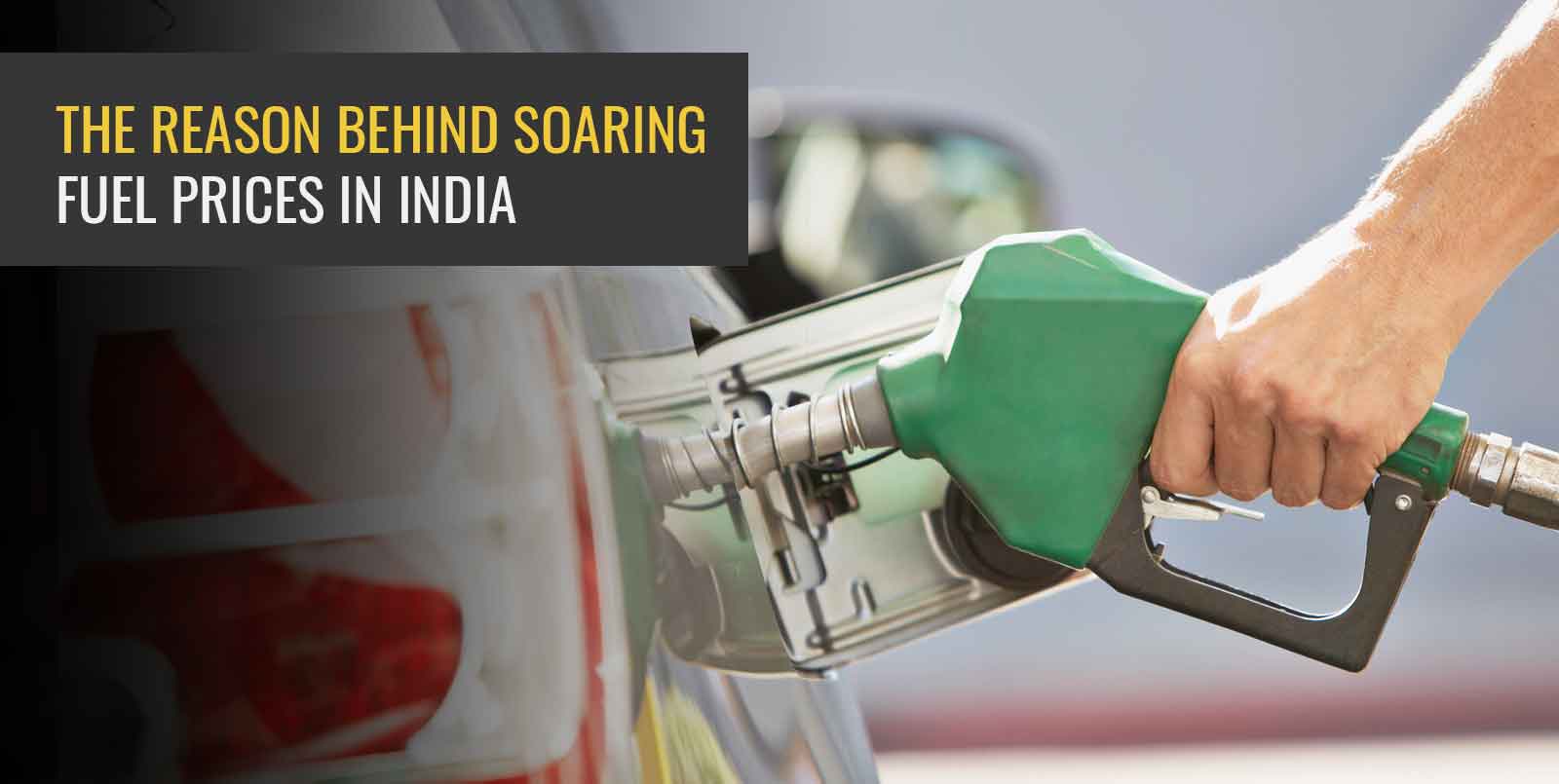 The Petrol and Diesel prices in India are witnessing record-high levels amidst the economic slowdown caused by the pandemic. All the Indian cities currently are charging above Rs.90 per liter of petrol, wherein some like Bangalore, Bhopal, Hyderabad, Jaipur, and Mumbai have crossed the Rs.100 per liter mark. Diesel prices are also running above Rs.80 in all the cities of India.

In a country where the daily average wage is Rs.300, and fuel being a necessary commodity, this sharp increase in prices has caused severe turmoil to the people of the country. They are blaming the central government and the center in turn is shifting the blame to the past government and so the loop continues.

But where does it end? What is the reason behind these sky-rocketing fuel rates and what is the government doing about it? Let’s find out.

How is the Fuel Priced?

Before diving into reasons for the price hike, let’s get a clear view of what actually goes in the pricing of fuel.

Earlier, fuel prices were revised on the 1st and 16th of every month. On 16th June 2017, the Government of India adopted a dynamic pricing system wherein the fuel price is revised every day. The move came in by public sector oil marketing companies.

This oil is then processed in refineries to obtain the various petroleum products and is finally sold to the vendors. This price is called the Depot Price.

The companies which deliver this end product to the vendors are Oil marketing companies. In India, Indian Oil Corp, Hindustan Petroleum Corp, and Bharat Petroleum corp own 90% of the market share.

The price at this stage is the actual fuel price. Afterward, the center levies excise duty, the state adds on tax, vendors take his commission and then it comes to you, the retail consumer.

India consumes more than 200 million tonnes of petroleum on a yearly basis. It is the 2nd  largest importer of crude oil with an alarming dependency of more than 80% on imports. Due to this, any change in the price of crude oil reflects itself early in the morning at the petrol stations.

As we can see, Crude oil prices touched the lowest-ever mark in 2020 and then sharply increased in 2021. This is because the global demand for fuel drastically fell in 2020 owing to the pandemic. In order to increase the prices from the lowest-ever point, OPEC countries and thier allies cut the Oil production by 1 million barrels per day.

Subsequently, as lockdown restrictions eased up a little, demand for fuel geared up again. This less production and more demand acted as a catalyst towards high fuel prices.

Another reason for the fuel price hike is the added VAT and excise duty by the government. Due to the hard-hitting pandemic, the government resorted to increasing the tax collection on fuel in order to generate revenue. The move was aimed at picking up the economy back from pieces.

Taxing fuel is one of the most reliable sources of income for the government. Moreover, it was one of the few commodities that were bound to be used even during the lockdown.

The excise duty on petrol was raised from Rs.19.98 per liter to Rs.32.98 per liter and on Diesel from Rs.15.83 to Rs. 31.83 per liter. Consecutively, states also increased VAT charged on petrol and diesel.

Take a look at the pi-charts below to gain a better picture of the comparative component of the retail price of diesel and petrol in 2014 and 2021.

The chart shows that only 30% of the end price is dependent upon external factors such as international prices and supply. A majority of 70% of the price comes from taxes and commissions.

This shows the significant impact tax rates have on retail fuel prices.

There are two government implied costs on the fuel prices, excise duty by the center and VAT by the state. This makes for roughly 60% of the retail price of petrol and 54% of diesel.

For context, this means that the actual price of petrol in Delhi, for example, including freight and other charges is merely Rs. 32.10. The remaining part is government taxes.

According to the finance commission of India, states should get 41% of the excise duty share. However, the central government, in recent years, has modified the way these taxes are consumed. Now, a majority part of the pie goes to the center. Thus, states have to levy an additional tax to stay apar.

For example, the fuel tax for last year was budgeted at Rs. 3.2 lakh crore, out of which, states will receive only 7,000 crores.

The center has raised a whopping amount of 14 Lac crore from these taxes in the last three years. Subramaniyam Swamy in a tweet expressed his views on the high tax rate and claimed that petrol should be sold in retail at a maximum of Rs. 40 per liter.

What is the Government Doing About It?

The first question that comes to mind is, why can’t the government simply reduce the taxes implied?

As per the statements given by the Union petroleum minister Mr. Dharmendra Pradhan and Union finance minister Ms. Nirmala Sitharaman, imposing these taxes was ardent to meet their developmental goals and welfare priorities.

They say, however, that India is urging the OPEC countries to increase production in order to overcome this crisis. Ms. Sitharaman stated in a conference that the center and state government will work out some mechanism to reduce the retail fuel rates.

Moreover, taxes are being used to generate jobs and provide gas in thousands of homes. Mr. Pradhan stated that PM Modi will dedicate 3,400 crores towards such projects.

He further added that the petroleum ministry has invested around Rs. 95,000 crores in the last 6 years on various energy projects.

They aim to make the northeast region fully self-reliant in energy. The Oil and Natural Gas Corporation (ONGC) is increasing its oil production in Assam and BCPL is also made operational again. The ministers argue that the tax implied is indirectly used for the retail customer’s welfare itself.

The answer to rising fuel prices is in a loop. The covid-19 pandemic caused low global demand which decreased fuel production by OPEC countries. To withstand the low production and covid implications, the government had to levy taxes thus resulting in overall high prices.

Looking forward, the retail customer’s best bet is either a unified stand on the center-state tax breakdown or improvement in supply by the OPEC countries.

If not taken care of immediately, the rising fuel prices could be a great threat to the overall living conditions and economic stability of an average Indian citizen.