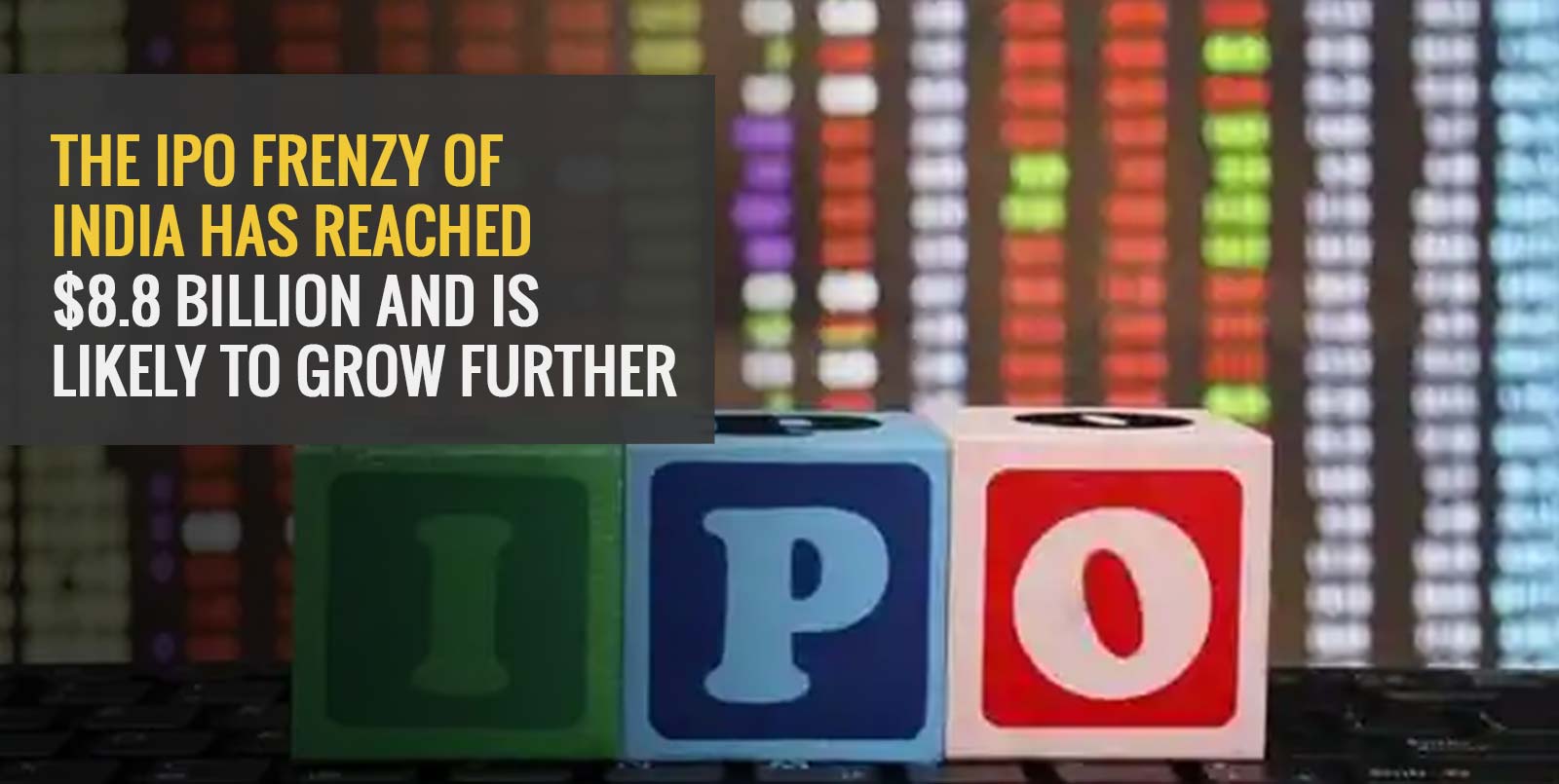 The IPO market of India is in a feeding frenzy, as a series of companies are lining up with their public offer in the coming months.

Till date, this valuation has reached $8.8 billion, surpassing the total amount raised in the previous three years. Since it is just August, at this pace, this valuation will reach an all-time high of $11.8 billion.

Founders, investors, and lead managers are running around to cash in on this fervent demand for fresh IPOs.

Who are the Catalysts in This Movement?

Zomato, the online food delivery behemoth, is, in a sense is leading this market growth. The startup went public in July, and despite its mediocre growth prospects and losses in consecutive financial years, its shares have soared more than 70%.

This surprising rise has certainly given a notion that similar, profit challenged startups can find an equal response from prospective investors.

Another ‘shining star’ of India’s startup scene, Oyo Hotels and Homes Pvt Ltd., is preparing to go public this year. The company has a troubled history of a botched-up aboard expansion alongside various allegations and mismanagement. Individuals associated with this matter are hinting that Oyo’s IPO is maybe due in October.

Also, the ‘app-cab’ giant Ola and fintech company Pine Labs Pvt Ltd. is planning to walk on the same path as their aforementioned startup counterparts.

India Is the Star of This Show

One of the executives of Citigroup Inc. has mentioned that India is the star of the Asian IPO show. Citigroup Inc. is one of the leading foreign banks managing India’s IPO frenzy. According to him, Zomato’s IPO has opened the eyes of investors around the globe and brought the market potential into the spotlight. This has also encouraged privately funded unicorns to go public.

The performance of recently launched IPOs has been a subject of envy as well. They are beating Nifty 50 benchmark stocks by 40 points and more. This gap has been the highest in 7 years.

Paytm, Flipkart, And Byju’s Are Yet to Enter the Market

India’s 3 most valuable startups are gearing up for their debut in Dalal Street by the end of this year.

Paytm, India’s leading digital payments company has filed its documents for the preliminary offering. With this public offering, the company has plans to raise about Rs. 166 billion ($2.2 billion). Moreover, if Paytm’s IPO can reach its predicted level, it will be India’s largest stock market debut ever, surpassing Coal India’s Rs. 150 billion public offerings in 2010.

Additionally, e-commerce giant Flipkart is also planning an IPO. According to the reports from Bloomberg, the company can go public as soon as the fourth quarter of FY2021 – 2022.

Also, the digital education startup Byju’s, currently valued at $16.5 billion, is getting advice to take advantage of this ‘red hot’ market. However, the company is now focusing on planned and substantial acquisitions, and they are willing to put their plans of going public on hold till the end of this fiscal year.

This hysteria is not likely to dial down easily.

Regulatory upheaval in China is one of the primary reasons, as pointed out by various market experts. In addition, the Chinese Government’s attempt to identify dubious private investors has spooked financiers globally, which has presented India as a worthy alternative.

Since India’s internet space is not as heavily regulated as China, it tilts the favour for this country. Also, India may not offer similar prospects in broader economic terms, but it is a more stable bet.

India’s startup space may have lagged behind the US and China, but 2021 has been a breakout year. The Covid-19 virus has shifted a large section of Indians to use online platforms for grocery shopping to tuition. Hence, the revenue has surged for these digital startups.

Global investors like Temasek Holdings Pte, KKR & Co., Fidelity Investments, and others have relied on India’s growth prospects. Resultantly, the total value of venture investments in this country reached $7.9 billion in July. Hence, it has overtaken China on a monthly basis for the first time.

Considering India’s political stability, macro fundamentals, and investment policies have presented this country as one of the better destinations for global investors.

To know more about upcoming IPOs, stay subscribed to the Angel One Blogs.

There is no concrete information available yet on this matter.

PhonePe is the digital payments platform that was recently taken over by Walmart.

The company is preparing to file a DRHP with market regulator SEBI. The dates are not available yet. However, you can stay subscribed to Angel One to get regular updates on Nykaa IPO.