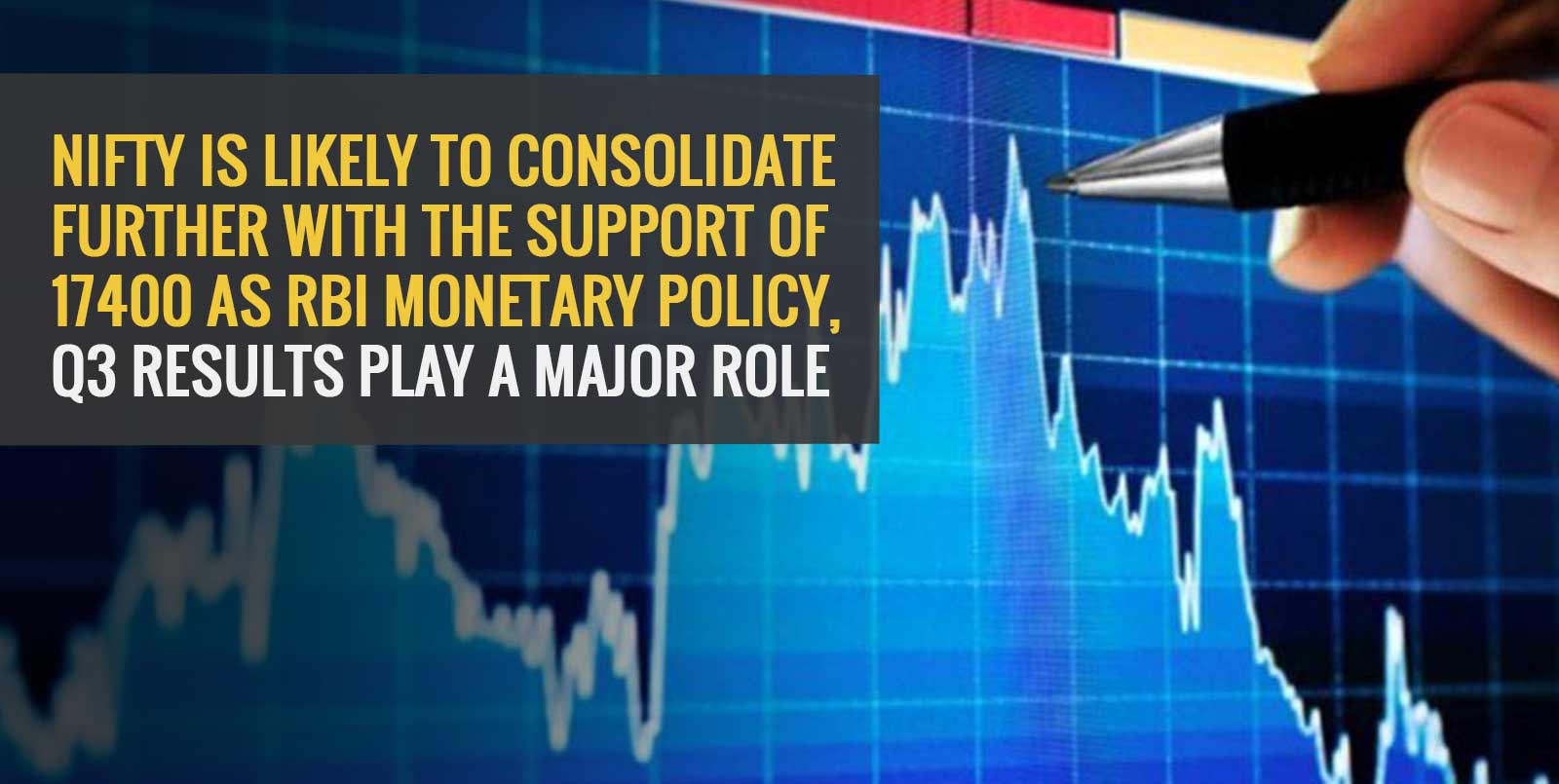 In the previous week, FM Nirmala Sitharaman proposed Budget 2022-23, when the stock market gained over 2 percent. After two weeks of consistently falling, the markets had ended the week positively though the volatility remained high.

The index has slipped below its prior bearish candle on the one-day charts. The index has also moved below the 21-day simple moving average and the mid-band of the Bollinger Band indicator. On the one-hour chart, the index has broken the bullish trendline, which suggests a potential weakness. A bearish crossover has also occurred on Stochastic RSI on one-day charts of Nifty50. Currently, the index has support at 17400 and resistance at 17800. On the other hand, Bank Nifty has support at around 38300 and resistance at 39200.

The index has formed a bullish candle on weekly charts. However, the candle has an upper wick which displays the indecisiveness between buyers and sellers. On one day and intraday charts, the Nifty50 is forming higher bottom formations that support the uptrend. For the traders, 17400-17350 is the support level that the index should maintain to continue its up move. On the other hand, if the index breaks below 17350, it could trigger a drop to 17200-17150 levels.

Trend and Important Levels for Nifty50

The Nifty is expected to consolidate in the short term as long as it remains within the bands of 17400 and 17800. Any breakout in the near term may cause further movement in the market.

On the upside, the Nifty needs to conquer 17800 to trigger a bull market. On the downside, 17300 is required to break on a closing basis to trigger a bearish trend. Until then, the market may likely remain volatile.

The Nifty tried to bounce back from its recent lows but faced resistance near its 20 days moving average and the 61.8% retracement from its fall in January. It has now broken down from a rising channel and the key hourly & daily moving averages. It is now looking for support at 17400. Slight downside risk is seen if it manages to break below this level. On the other hand, 17800 is the upper end of the current short-term consolidation range.

Other Domestic and Global Fundamentals

On the domestic front, markets could react to the results of the State Bank of India on Monday and the Reserve Bank of India’s monetary policy review as well. Their economic growth and inflation commentary will be closely watched as the US Federal Reserve continues to raise interest rates. While the volatility may continue to rise, the experts advise traders to maintain a cautious stance and monitor the positions when it comes to investing. On the global front, markets are expected to remain volatile due to uncertainties over the US inflation data.

What does Bollinger Band indicate?

Bollinger bands are a trading indicator used to identify entry and exit points. There are three bands in this indicator. These bands are used to determine the overbought and oversold conditions of markets. Bollinger bands are very popular among both professional and home traders. However, the bands are only focused on price and volatility.

The RBI’s monetary policy meeting will be the major event to decide the market trajectory. With the government’s borrowing increasing and global inflation rising, the central bank will keep a close watch on the future path of monetary policy.

While 17800 is an important pivot point, there is the highest build-up in call open interest at the same level. This indicates that the call writers are confident about Nifty50 not crossing that level in the near term.