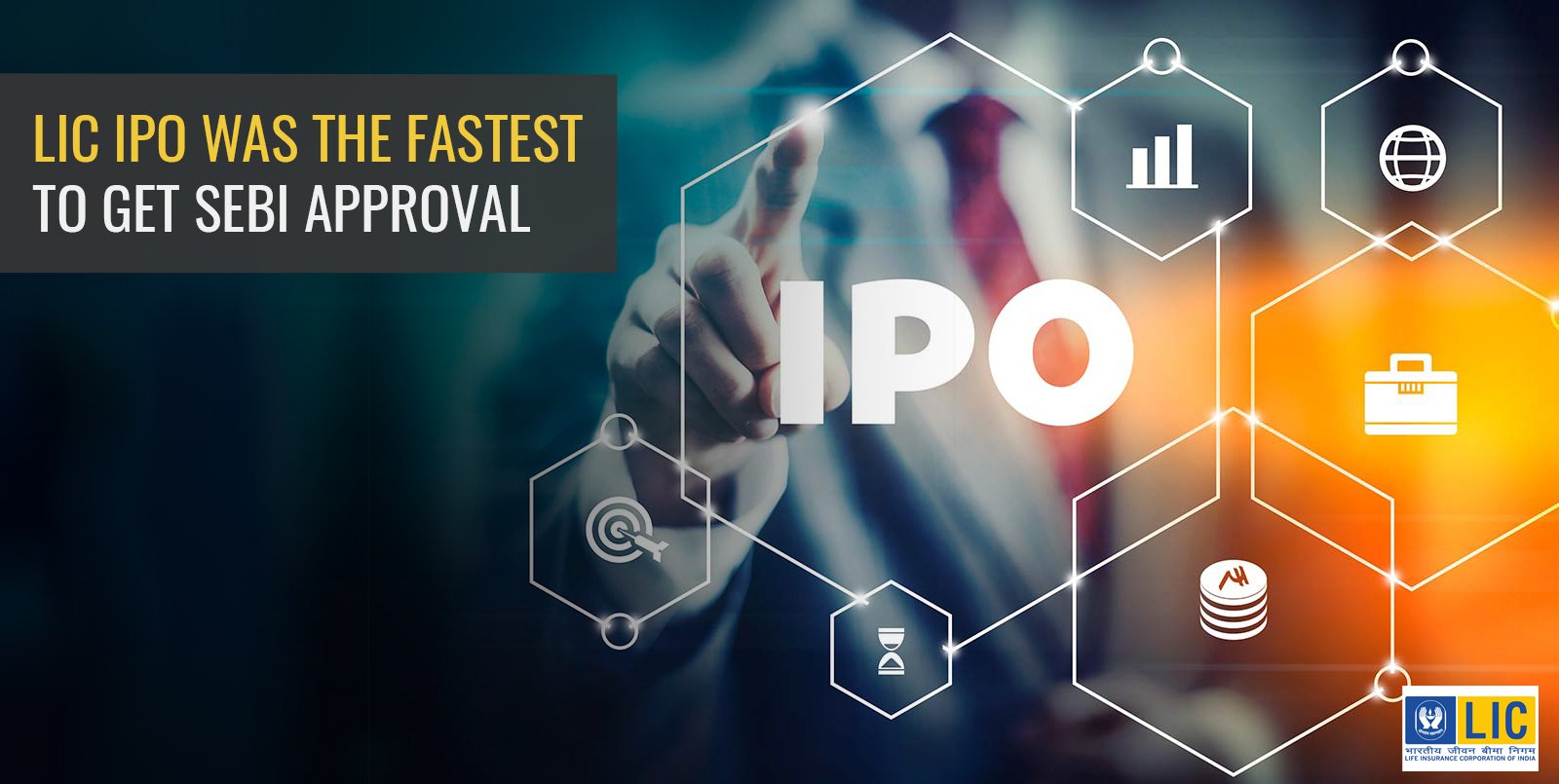 The Securities and Exchange Board of India (SEBI) accepted Life Insurance Corporation’s (LIC) initial public offering (IPO) plan in 23 days, the quickest in sixteen years. According to SOURCES, the swift approval of the country’s biggest IPO to date has opened the path for faster approvals in future offerings, which would help IPO-bound firms.

On 13th February, the state-owned insurance submitted its draft red herring prospectus for the public sale, which is expected to net the government between Rs 65,000 and Rs 70,000 crore. The IPO was approved by the SEBI on 8th March, according to sources. According to statistics provided by primedatabase.com, IPO approvals took an average of 75 days in 2021, compared to 82 days in 2020.

However, SEBI approved a few IPOs in 2020 in less than a month. Mrs Bector Food Specialties’ IPO request was granted in 30 days, whereas Railtel Corporation of India received approval in 32 days. Last year, Macrotech Developers, a Mumbai-based real estate developer, and Seven Islands Shipping received clearances in 35 days. In 2008, the regulator took 214 days to approve an IPO, 198 days in 2013, and around 100 days in 2018.

The approval time has been shortened because of changes in the Issue of Capital and Disclosure Standards legislation and harmonized disclosure requirements. Meanwhile, investment bankers are doing more due research before presenting an offer document, shortening the time it takes for clearance. “SEBI has recently been super-efficient in clearing offer documentation,” one analyst remarked. “The whole initial public offering process has been streamlined, standardized, and made process-driven.”

The administration plans to sell up to 5% of its shares in Life Insurance Corporation of India in the nation’s biggest initial public offering, collecting up to Rs 65,000 crore and establishing the insurer as the largest regulated financial advisory organization in the nation.

The insurance giant might be worth more than Rs 12.5 lakh crore, according to IPO paperwork submitted with the regulator, making it more valuable than all other listed government-owned enterprises. According to the records, the government plans to sell 31.6 crore shares.

When the IPO is completed, it would break the previous record established by One97Communications, Paytm’s owner, which raised Rs 18,300 crore in November and valued the company at Rs 1.5 lakh crore. Paytm’s stock has dropped approximately 58 percent since its initial public offering.

After finance minister Nirmala Sitharaman announced the government’s plan to sell a stake in LIC in her budget speech on 1st February 2019, the filing of the draft red herring prospectus is the culmination of more than two years of work at LIC and the Department of Investment and Public Asset Management (DIPAM).

So far in fiscal 2022, the profits from the sale of new NMDC shares and certain government-owned Axis Bank shares have been disappointing, totaling Rs 12,030 crore. The government authorized the disposal of four federal PSUs and two Odisha government enterprises’ 93.7 percent share in Neelachal Ispat Nigam to Tata Steel Long Products at an enterprise value of Rs 12,100 crore earlier this month.

Despite the strategic share sales in Bharat Petroleum Corp and Shipping Corp of India not taking place this fiscal year as anticipated, the government is set to surpass its revised goal of Rs 78,000 crore for this fiscal. Milliman Advisors, a Dipam-appointed actuarial firm, has estimated the company’s embedded value to be Rs 5 lakh crore. LIC has valued at Rs 12.5 lakh crore, or 2.5 times its enterprise value.

The EV is an important financial indicator for insurers since it is a measure of future cash flows in life insurance firms. Insurance companies are evaluated based on their inherent value.