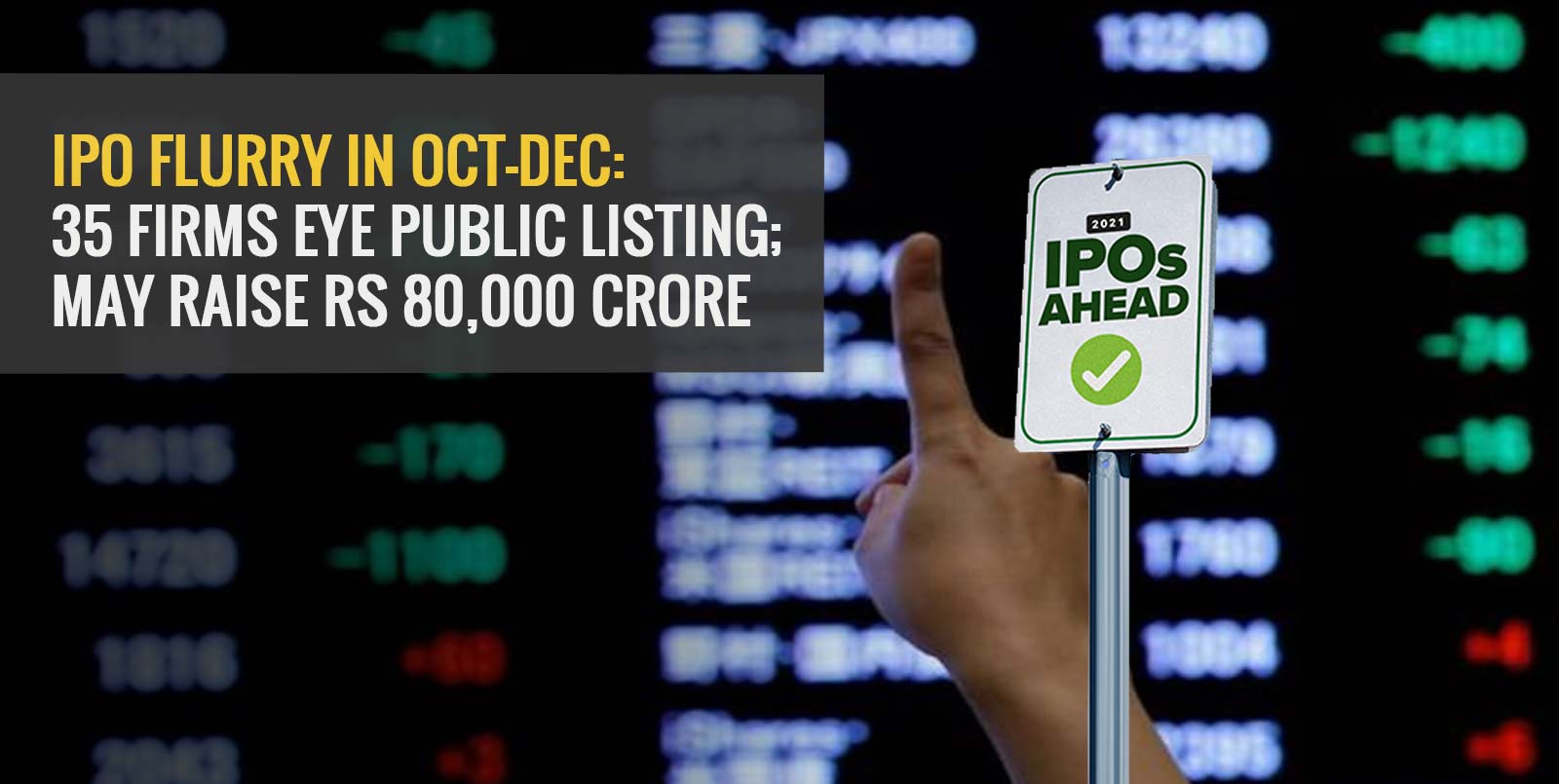 It’s expected to be a busy IPO season during the last three months of the year – news reports suggest that 35 firms are planning to raise a total of Rs 80,000 crore for the quarter by way of initial public offerings .

Among the companies planning to take the IPO route include Policybazaar, Paytm, Nykaa, Aarohan Financial, Mobikwik, Star Health & Allied insurance. As many as 14 companies have already been given the nod from market watchdog SEBI. Another 64 firms have filed their draft papers, reports add. The 14 firms that have got the green signal expect to raise anywhere in the range of Rs 22,000 crore.

In the current fiscal so far, 26 firms have launched their initial public offerings and have raised over Rs 59,716 crore, an over two-fold increase from the Rs 27,125 crore raised via IPOs in India during the same period of the last year. According to data, more than Rs 67,000 crore was raised through the year 2017 via IPOs of 36 companies. In 2020, a little over Rs 26,600 crore was raised by 15 firms through the sale of initial sales.

Globally speaking, over 2000 IPOs have together raised more than $420 billion thus far in 2021, a record peak, according to reports.

The rise of tech/start-up IPOs

Data attributed to SEBI’s chairperson in recent reports say that tech firms have raised nearly Rs 15,000 crore through IPOs in India over the past 18 months. Also, he noted that Rs 30,000-crore worth IPOs by such growth-oriented firms are in the queue.

On Friday, October 1, Oyo Hotels filed its draft prospectus with SEBI in a bid to raise Rs 8,430 crore to join a growing list of homegrown startups eyeing public issues. The hospitality startup was previously valued at $9.6 billion when it raised investments in September. Meanwhile, digital payments firm Paytm, which seeks to raise Rs 16,600 crore through its IPO, is seeing foreign institutional investors (FIIs) and sovereign wealth funds (SWFs) valuing it at more than $20 billion, as per news reports.

The calendar year 2021 saw gaming startup Nazara Technologies taking the IPO route in March to raise a little over Rs 580 crore. The current fiscal saw Zomato’s IPO worth Rs 9,375 crore, the largest IPO at that point since SBI Cards and Payment Services IPO of Rs 10,431 crore issued in March 2020. Ever since, there have been tech and new-age companies including cosmetics and lifestyle products platform Nykaa and e-commerce logistics firm Delhivery, among others that have eyed the IPO path.

Many of these new-age startups are also unicorns (with over $1 billion valuations). Zomato was the first among unicorns in India to go public when it launched its IPO in July 2021. According to reports, as many 17 to 18 unicorns are expected to test the IPO waters in the next 18 to 24 months to raise nearly $12 billion. There are currently 66 unicorns in India and nearly one-third, ie, 29 of them were created between January and September 2021 alone.

One of the reasons for the rise of tech and start-up IPOs is that SEBI has eased compliance requirements. The market watchdog has given the nod for the reduction of the lock-in period for promoter shareholdings in an IPO firm to 18 months from the date of IPO share allotment instead of the earlier three years. For promoter shareholding that exceeds the minimum contribution for promoters, the lock-in period is six months in place of the earlier one year, according to SEBI. The market watchdog also gave the nod to cut down requirements pertaining to disclosures at the time of an IPO. Many of these relaxations are expected to pave the way for more new-age firms to take the IPO route.

The capital markets regulator also announced that a superior voting rights (SR) shareholder, should not have a net worth of Rs 1,000 crore at the time of a company’s planned listing. So far, the SR shareholder was not allowed to be part of the promoter group at the time of listing if the net worth of the group was over Rs 500 crore. This move is expected to boost start-up IPOs in India.

Why the IPO flurry?

One of the reasons for the IPO rush is the bull run in the markets. Both the benchmark indices, the BSE Sensex and the NSE Nifty have scaled new peaks this year, and have encouraged more retail investor participation. The BSE Sensex touched a landmark 60,000 points in September, rallying more than 20 per cent thus far in the current fiscal year.

In FY 2021, 14.2 million fresh demat accounts were opened, a record, on the back of the market recovery following the March 2020 crash. According to the BSE, stock market investors have grown by 10 million in the three months between June and September. Also, as per SEBI data, the number of demat accounts have risen to over 62 million, suggesting an increased investor interest in the stock markets.

Further, global liquidity and a prolonged near-zero interest rate regime have created an investor-friendly atmosphere. Foreign institutional investors (FIIs) have invested Rs 38,000 crore in the country’s equity markets according to reports. Foreign institutional investors have contributed nearly 55 per cent of the funds that have been raised through initial public offerings so far in the year, data suggests.

Market regulator SEBI has also taken steps aimed at encouraging companies to go public, experts note. In the latest move, on October 4, SEBI has proposed splitting of the high net worth investor segment in IPOs into two. In the overall HNI segment, the first category will only be for investors whose applications are in the Rs 2 to Rs 10 lakh band (one-third of share allocation), while applicants with over Rs 10 lakh will be in a second category (two-thirds of shares). The HNIs come under the non institutional investor category.

Book building is basically the procedure used by firms to raise capital through initial public offerings and follow-on public offers. Book building issues involve a price band offered by the issuer within which investors can bid; the final price is set by the issuer after bidding closes. In fixed price issues, the price at which securities are offered and will be allotted is made available to investors in advance.

According to SEBI, the move is aimed at curbing large non institutional investors from cramping smaller ones for IPO allotments.

The disinvestment of public sector undertakings (PSUs) is further expected to add to the IPO rush. A case in point is the country’s biggest insurer LIC, which is likely to file its draft papers with the markets regulator by the next month, as per reports. A 5 to 10 per stake sale via the IPO route would make it India’s biggest initial public offering, experts note. The government is reported to be seeking an Rs 8 to 10 trillion valuation. The government aims to launch the IPO before the end of the current fiscal.

The market is expected to witness nearly 35 companies going public to raise Rs 80,000 crore between October and December, according to reports. While 64 firms have filed their draft papers, 14 firms have already received the nod from SEBI to raise nearly Rs 20,000 crore. It is expected that 12 companies will launch their IPOs in October 2021 alone. The flurry of IPOs in India has been attributed to the liquidity in the global markets, ease of compliance, low interest rates, increased foreign institutional investment and the market recovery since the crash of March 2020.

As many as 35 firms are planning to raise a combined Rs 80,000 crore in the months between October and December.

As many as 12 companies are expected to take the IPO route in October and are likely to raise over Rs 23,700 crore.

A unicorn is a startup firm that has a valuation of more than $1 billion.

India is reportedly home to 66 unicorns with nearly one-third (29) added in this year alone.