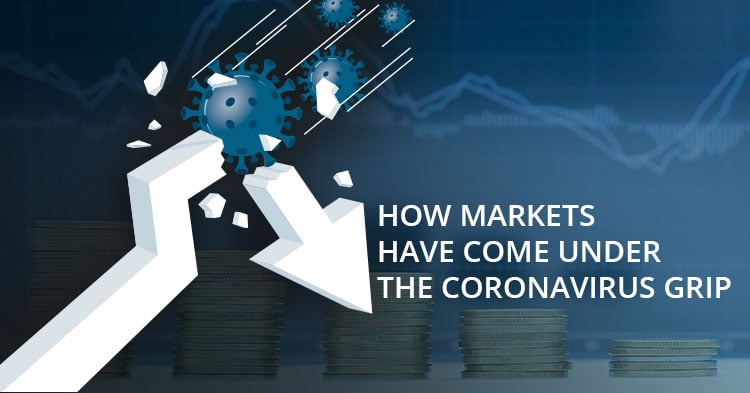 This 28th of February recorded one of the worst Indian stock market crashes within a single day wiping away approximately ₹5 crores in investor funds. This major drop was influenced by the global scare of the novel coronavirus, officially known as COVID-19, turning into a pandemic. There was a 3.5% drop in Indian indices which is the second biggest fall in the history of Indian Sensex. Sensex closed at 38,297.29, plunging by 1,448.37 points. The scare also affected Nifty whose performance tanked by 3.711% and settled over the 11,200 mark, dropping by 431.55 points.

After two fresh COVID-19 cases cropped up in India, March 2nd also closed on a negative although it was initially on a trajectory of recovering losses. Sensex closed at 38,144, 153 points below its start. Sensex also swung pretty sharply from the high of the day at 39,083 and dropped 1200 points lower to 37,785, likely when the news of fresh cases spread. Nifty, on the other hand, closed 0.6% lower at 11,132.

Meanwhile, gold prices soared at ₹42,125 by ₹700 for every 10 grams on the Multi Commodity Exchange. Simultaneously, the price of Rupee dropped by 72.36 against the U.S dollar. According to financial experts, this observable rebound in the MCX was driven by the hope that the central banks worldwide will be proactive towards stabilizing the financial markets that have been jostled by the impact of the COVID-19 on the global economy. In a public statement, the Bank of England and Japan declared that they were ensuring financial stability is their core focus at the moment.

Among market players, the general consensus is that the worry of further economic slowdown as the virus spreads is leading to current market dips. Which players are the triggers behind the current market fall? From KRChoksey Securities, Deven Choksey says that global credit funds are responsible since their approach towards the market is to play with the swing. Global credit funds are offloading their positions which are sending the market downward at the moment. As they sell stock, they are pumping more money into the U.S treasury, and the dollar’s value is growing in accordance.

The selling was most rampant among short-term traders in India on Friday evening of the fated 28th. In the last 30 minutes, 50% of the selloff was registered by the Indian stock market. This has fostered the view that short-term traders are also responsible for the market movement. However, the fall in Indian indices was much calmer as opposed to that of the U.S. Globally, we can see a lot more extreme market dips. Dow Jones went 15% under its market highs of the previous month as COVID-19 spread to the U.S.

India, as of today, has 6 total cases of coronavirus. However, this number is expected to grow. Financial expert Arun Kejriwal adds that while we can expect new vaccines to calm the spread of the coronavirus soon, markets will still be volatile going forward. In addition to this, the supply chain with China which has been severely affected at the moment will remain untethered until COVID-19 is under control. Kejriwal advises that presently, with the market volatility being high, small investors can consider making profitable purchases for a low cost.

Kejriwal is also among the crowd that believes that with the summer setting in, the virus will naturally die out due to high Indian temperatures, which is also echoed by Donald Trump. Unfortunately, Trump can not contain the media fear mongering about the spread of COVID-19 within the U.S. There are currently over 300 cases of COVID-19 in the U.S with 17 deaths as of this Friday, 6th of March. The sentiment of investors in the U.S is currently fear, and markets are severely underperforming as a result.

On the 3rd of March, BSE Sensex closed at 38,623.70 after rising by 479.68 points. This was the organic result of RBI (the Reserve Bank of India) stating that it’s well-prepared to take necessary actions to guarantee the systematic functioning of financial markets while preserving financial stability country-wide and maintaining confidence in the market’s performance. This has temporarily calmed investors’ sentiments while health experts work hard towards developing a vaccine for COVID-19.

In the meantime, the U.S central bank, the Federal Reserve System, also established an emergency cut in interest rates on March 3rd. This was carried out to match the underperforming U.S markets. The Federal Reserve System slashing the US benchmark rate of interest by half of a percentage point. To put this into perspective: this is the biggest cut in interest rates since the 2008 financial crisis. This move by the U.S central bank is likely to have a calming impact on the investor’s sentiments within the U.S as well as on markets worldwide.