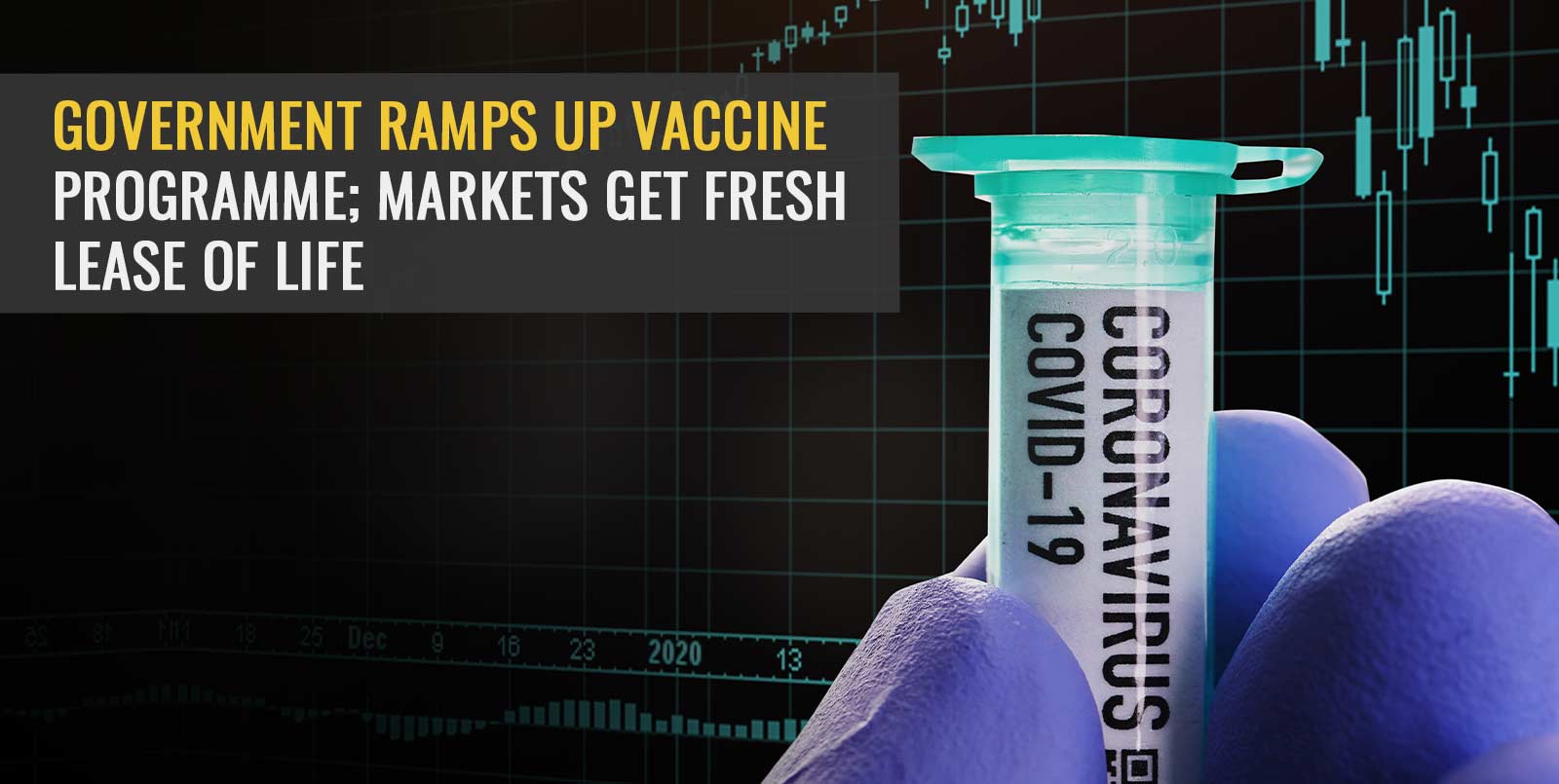 The BSE Sensex has seen a comeback by adding more than 500 points in the early hours of trade on Tuesday, April 20, gaining a little over 1 per cent. The broader benchmark index Nifty also traded over 1 per cent higher at 14,500-levels.

This regaining of lost ground comes after the Sensex and Nifty closed in the red, at 882 points and 258 points lower respectively. Both the benchmark indices ended nearly 1.8 per cent lower. Auto, banking and energy stocks tugged the indices down while only pharma stocks ended in the green.

According to data from the exchanges, foreign institutional investors (FIIs) were net sellers on Monday, offloading nearly Rs 1,633.70 crore. The India volatility index, India VIX on Monday went up 10.22 per cent to reach 22.48, from the earlier 20.40 level. The VIX needs to hold onto the under 20 levels for the markets to regain bullish sentiments.

Vaccine for all drives positive sentiment in markets

Today’s market rebound comes on the back of the government’s decision to open up vaccination for everyone over the age of 18 from May 1. The central government has also announced that the states can purchase coronavirus vaccines from manufacturers directly. The Centre announced that manufacturers can release 50 per cent of their supply at a pre-fixed price. As per the Phase 2 Strategy of the National Covid-19 vaccination programme, manufacturers will supply half of their Central Drugs Laboratory (CDL) monthly doses to the central government. Also, vaccine manufacturers will be offered incentives to increase their production to draw new players both on the domestic and international front.

Recent reports also showed that the government will import the Sputnik V vaccine from Russia to cover nearly 125 million people. India speeded up emergency use approval for eligible foreign-made vaccines in a bid to combat the second surge of infections. In a further shot in the arm for the vaccine programme, India has also given the nod for an over Rs 45-billion grant for Serum Institute of India and Bharat Biotech to enhance production. The grant has been split into Rs 3,000 crore for SII and Rs 1,500 crore for Bharat Biotech. The Centre has also given the nod for a Rs 65 crore grant for Bharat Biotech’s facility in Bangalore, which is being prepared for scaling up Covaxin production.

This shift in the vaccination policy seems to have buoyed investor sentiment and positively impacted the markets on Tuesday. Till this announcement was made, the government had opened up vaccination for those above 45, those above 60, apart from front line and healthcare workers.

Surge in Covid-19 cases and markets

India has seen an exponential rise in cases ever since the third week of March, signalling that a second wave has very much taken over major parts of the country. India reported more than 2.5 lakh new cases on Monday, according to data from the Union Health Ministry. Several states have imposed curbs on mobility, thereby making an impact on the market sentiment as well.

According to reports, equity performance has dipped by 4.5 per cent ever since. In late March, the BSE Sensex and Nifty 50 indices had fallen steeply as the government announced that it detected a new double mutant variant of the coronavirus. On March 24, the Sensex had ended 871 points or 1.74 per cent lower and stood at 49,180 points and Nifty shed 265 points closing at 14,549. It may be recalled that the Sensex had scaled the 50k summit for the first time in January.

India has taken 92 days to touch the 12-crore mark when it comes to vaccinations, making it the fastest country to achieve this. India is followed by the US which achieved the same in 97 days while China took 108 days. Yet, at the current pace, India will not reach 70 per cent of its vaccine coverage till the end of the year, news analysis shows. With the fresh announcements, it is expected that the vaccine programme will gather pace even as more vaccines will be made available.

The markets on Tuesday opened on a positive note as the government announced the liberalisation of the vaccination programme. Earlier, on April 19, the markets closed in the red, with both the Sensex and the Nifty losing nearly 2 per cent. Foreign institutional investors turned net sellers, as investor sentiment dipped.

However, following the government’s announcement of opening up the vaccine for everyone above 18 from May 1, the benchmark indices, Sensex and Nifty opened in the green. The positive impact of the vaccination programme is likely to beat the fears over the surge in Covid cases and the impact of curbs. The vaccine programme and incentivisation for manufacturers will definitely act as a shot in the arm for Dalal Street.