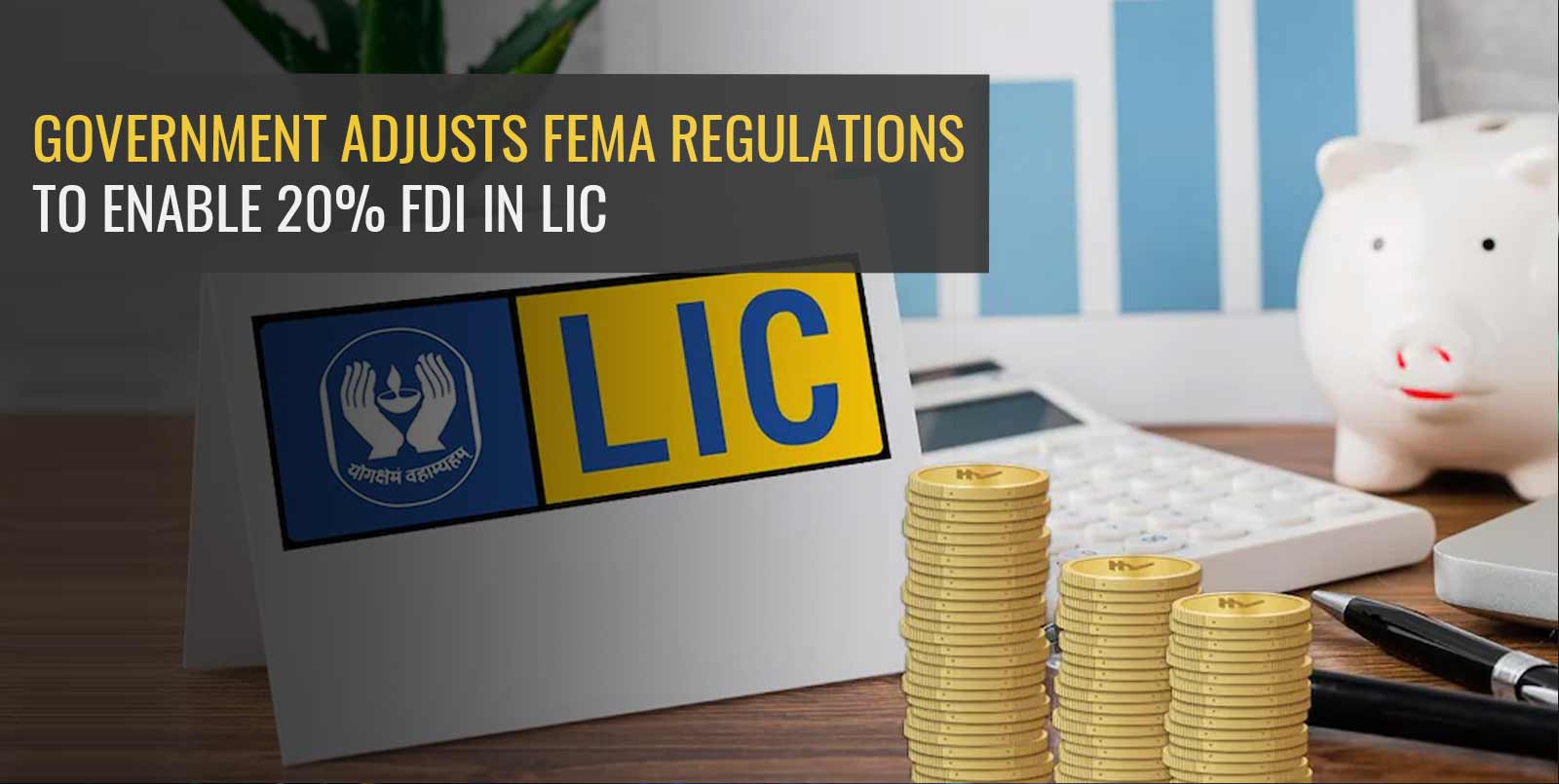 The government has modified the Foreign Exchange Management Act’s limits, enabling up to 20% foreign direct investment in the insurance giant LIC. The administration seeks to sell a part of its LIC stock in an IPO. In February, the LIC filed the DRHP for the IPO with the markets regulator SEBI.

Last month, SEBI accepted the preliminary paperwork, and the insurer is currently developing a revised request for proposal. The Department for Promotion of Industry and Internal Trade (DPIIT) revised its FDI policy on March 14 after receiving Cabinet approval, making it easier for foreign investors to participate in LIC ahead of the massive public offering.

To put into effect the actions DPIIT outlined in a news release, such as changes to the FDI policy that would allow significant foreign portfolio investors to subscribe to LIC shares, a FEMA notification was required. According to a recent gazette notification, “these laws may be referred to as the Foreign Exchange Management Rules, 2022.”

The announcement adds a paragraph to the current policy that allows up to 20% FDI in LIC through the automatic method. Due to the fact that the foreign inflows limit for public sector banks is 20% under the current FDI policy, it has been agreed to allow foreign investment of up to 20% in LIC and other similar corporate entities. “Foreign investment in LIC is subject to the terms of the Life Insurance Corporation Act, 1956 as amended from time to time, as well as those sections of the Insurance Act, 1938, as amended from time to time, as are relevant to LIC,” it said.

SEBI has cleared the draft prospectus for the government’s sale of a 5% interest in the company for an estimated Rs 63,000 crore, paving the way for the country’s largest-ever initial public offering.

India’s proposal to alter the Foreign Exchange Management Act seems to be yet another government drive to strengthen the Indian startup environment. The new FEMA guidelines enable a startup to issue convertible notes that may be converted into equity shares within ten years. The initiative to expand share-based employee incentives, according to ADIF, would increase the attraction of Indian startups in the global ecosystem — both in terms of talent and investment.

In fact, increasing the time limit for converting convertible notes into equity shares is likely to help startups attract financing from investors who may wish to maintain their capital as debt for a longer period of time. The most crucial and significant feature in this respect, according to the Executive Director at ADIF, is opening up the option for issuing ESOPs to workers outside of India, which would be particularly useful for startups looking to grow abroad.

Another positive aspect is that the government now recognizes ESOPs as a critical component in the success of companies. FEMA was enacted by the Indian government in 1999 to replace the Foreign Currency Regulation Act of 1973, with the goal of easing international commerce and payments and supporting the orderly growth and preservation of the Indian foreign exchange market.

The Act is often seen as a step toward modernizing the Indian economy and liberalizing and deregulating the Indian market. The Act’s requirements apply to a variety of enterprises, including Indian foreign exchange, banking and insurance services, Indian foreign security, export and import, non-resident Indian-owned overseas firms, and Indians living in the nation or abroad.

To know more about FEMA implications as well as upcoming LIC IPO news, visit the Angel One website. You can also start your trading and investing journey by opening a free demat account!