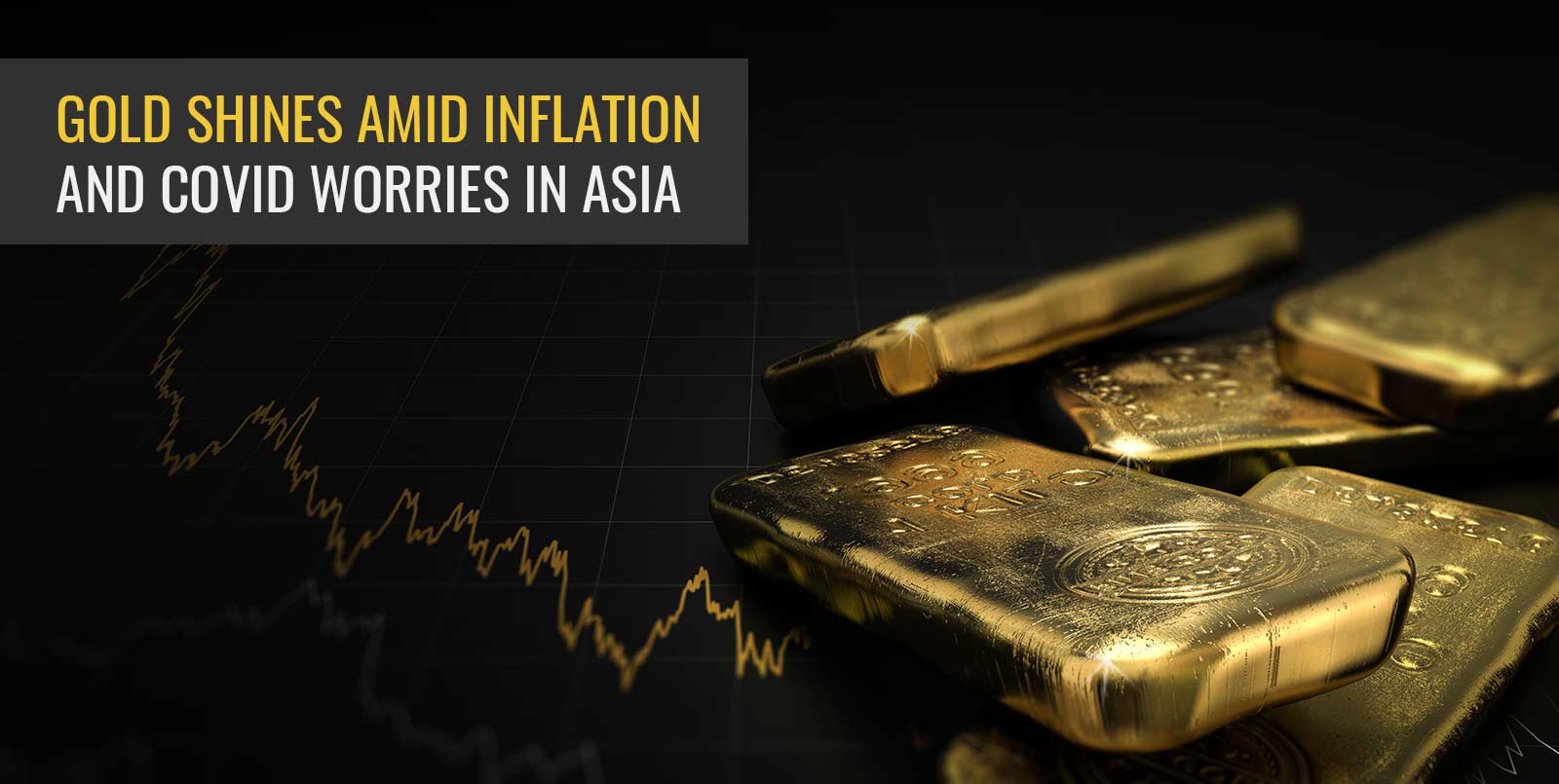 Gold touched an over three-month peak on Tuesday even as investors in exchange-traded funds have shown positive interest in the yellow metal. Further, rising inflationary pressure and a weakened US dollar have added to the appeal of gold as a hedge option.

The dollar was hovering close to lows of many months against European currencies, at $1.2167 against the Euro, near the lowest level on February 26, 2021. The Canadian dollar also rose to a six-year peak of C$ 1.2045 against the US dollar. Meanwhile, the Dallas Federal Reserve President on Monday underlined that there are no expectations of a hike in interest rates till next year. Also, there is a strengthening view that the Fed will continue to tolerate an increase in inflation, which it perceives as transitory. This means the dollar has and may continue to be lower against other major currencies.

The 10-year US Treasury yield dropped last Friday following an unexpected stalling of retail sales in the US. The yield fell 4 basis points to 1.628 per cent. Retail sales in April was unchanged after a rise of 10.7 per cent in March.

Also, a lot of US investors are expecting to glean insights from the minutes of the Fed’s meeting in April on what it means by “transitory” with reference to inflation. The Fed Dallas Bank President also said that price pressures are expected to come down in 2022, adding that a demand-supply imbalance and the base effect will enhance inflation in 2021.

The US Consumer Price Index (CPI) also went up by 4.2 per cent in April, the sharpest rise since September 2008. This increase also meant investors would be on their guard to watch inflation, which they fear could rise above the projections of the Fed. If the inflation rises, the Central bank may boost interest rates earlier than thought, investors fear.

All these factors have lifted the yellow metal’s lure as a good hedge for inflation. Spot gold gained 1.3 per cent to touch $1867.53 per ounce around 2 pm in New York. It had earlier touched $1868.49, which is the highest since February 1. Gold futures for June delivery also increased 1.6 per cent to touch $1,867.60per ounce. In Asia too, gold prices went up on Monday to touch their highest level in over three months. Concerns over a rise in Covid-19 cases in some countries in Asia including India also enhanced the demand for gold. There have been fears of rising Covid-19 cases in the Taiwan, Singapore and Asia-Pacifi markets as well.

In line with the global trend, prices of gold in India too increased; on the Multi-Commodity Exchange (MCX), gold futures went up 0.68 per cent to touch Rs 48,001 for 10 grams on Monday. The silver futures for July rose 1.2 per cent at Rs 71,939 for a kilogram.

From the investor perspective in India, equity mutual funds saw a net inflow of Rs 3437 crore in April, making it the second month to see an inflow, according to data from the Association of Mutual Funds in India (AMFI). However, the inflows in March were much higher at Rs 9115 crore; till March, equity schemes saw an outflow for eight months in a row. Gold exchange traded funds or ETFs too saw a net inflow of Rs 680 core in April, when compared to Rs 622 crore in March. This shows an increased infusion into gold ETFs in April, and with the weakened US dollar and rising inflation fears, the trend in India too may mirror the US and see an increase in ETF inflow.

Even in the financial year ending March 2021, gold ETFs saw record inflows to the tune of Rs 6918 crore, which is the highest ever infusion in a year, according to AMFI. The inflows into gold ETFs for the year ending March 2021 saw a huge 328 per cent year on year increase from FY 2020. This reflected the economic disruption following the first wave of the pandemic. Following a recovery and a strengthening of bond yields in the US, gold prices corrected from the peak levels. However, with fresh inflation worries, the prices have taken an upward trend again.

In the US too, inflows into gold ETFs have increased after dropping in the initial months of 2021. Bitcoin has dropped to $44,000 from its $65,000 peak, and reports indicate that there seems to be a shift from Bitcoin to gold in the recent past. Research by Bloomberg indicates that investors in ETFs have bought gold for the last six sessions after selling for months.

Gold prices have touched over a three-month high as the US dollar weakens and inflation worries increase in the US. In India too, gold prices have shot up, and there has been an increased interest in gold ETFs. Gold is typically seen as a hedge against inflation and economic uncertainties and with worries over Covid-19 cases in India and the rest of Asia, gold is having its moment.