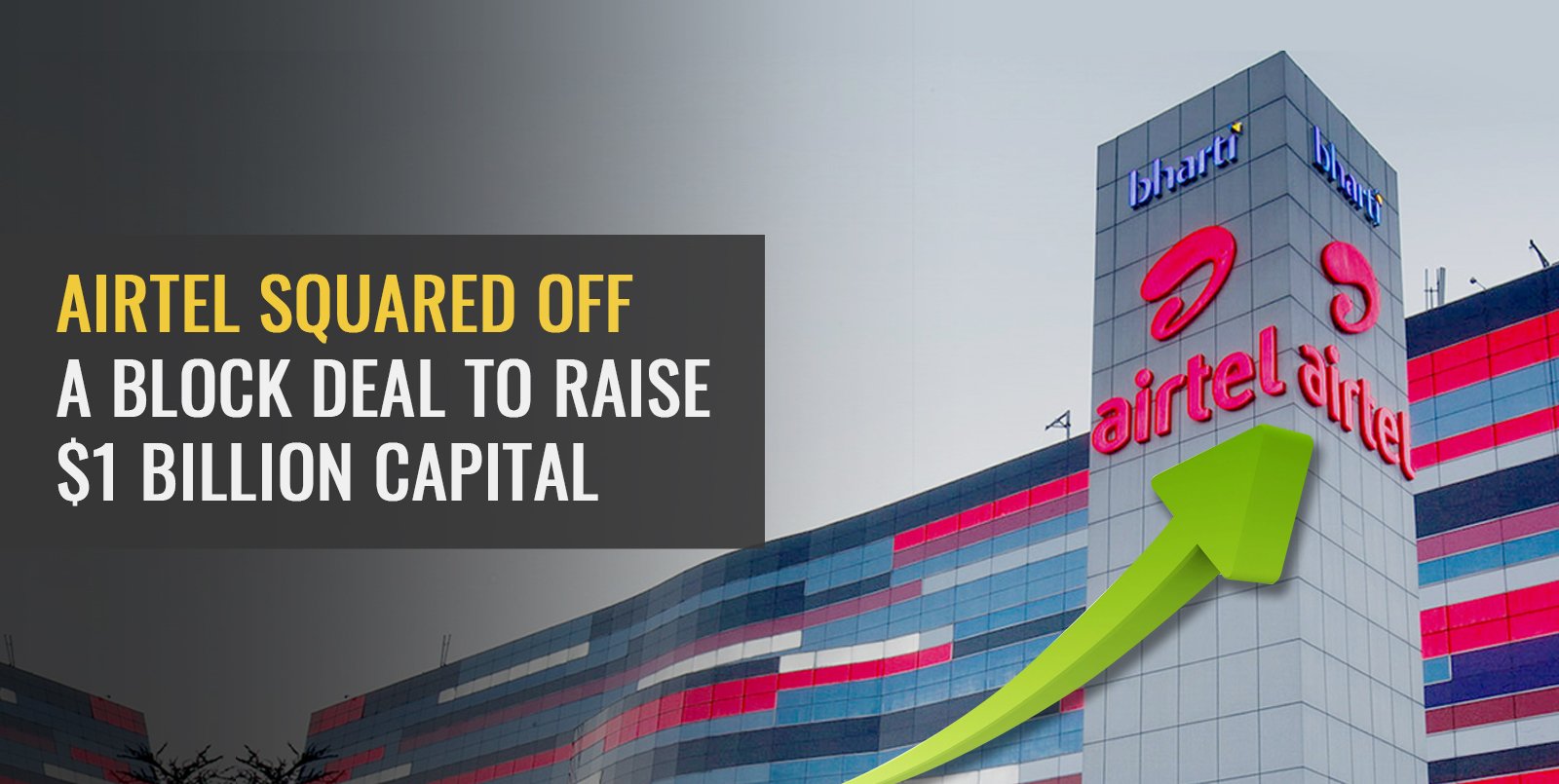 It seems like companies are leaving no stones unturned that might help them avoid the rising financial crisis from COVID-19 pandemic. On Tuesday, Bharti Telecom, the promoter company of Bharti Airtel, announced a block deal of share worth Rs 7,600 crore to improve its balance sheet.  Although the deal happened on Tuesday, Airtel is yet to make its details public.

With this deal, Bharti Airtel joined the list of other top Indian companies which have recently announced stock sales through different deals. Companies like Reliance and GlaxoSmithKline had already sealed quite a few deals that allowed them to raise funds from the market.

Bharti Telecom has sold 150 million shares, equivalent to 2.75 percent of its stake in Airtel to raise $1 billion capital. The floor price for Airtel shares block sale is decided at Rs 558 apiece, 6 percent discount from its closing price on Friday.

What is a Block Deal?

A block deal is a single transaction where shares change hands from one party to another, mostly institutional players. The minimum size of a block deal is 5 lakh shares or five crore volume.  It takes place through a separate transaction window during the first 30 minutes of trading hours.

Salient points of a block deal

How is this deal going to help Airtel?

It is expected to help Airtel lower its current debt exposure.

Airtel has a debt exposure of Rs 88,251 crore in March 2020. It had come down from Rs 1.082 trillion a year ago. In January the company raised $2 billion through QIP sales to pay off additional airwave and license fees after it loses a court case.

The Bharti Airtel block deal will help it write-off more debt from its balance sheet and will reduce promoters’ liability by 2.75 percent. Mittal led Bharati Telecom currently owns 58.98 percent stake in the company, which will come down to 56 percent after the deal. Airtel had reported a loss of Rs 5,237 crore in the 1st quarter of 2020 against Rs 107.2 crore of profit last year. It is believed that the block sale is arranged to meet Rs 7,004 crores of reassessed regulatory costs relating to spectrum change.  After the announcement, its stock price dipped by 5.4 percent during early hours of trading, although recovered partially to close at 3.3 percent lower at Rs 573.45.

Airtel has recently reported 14 percent growth in user revenue this year. As a result, Airtel’s share prices rose to an all-time high. Experts believe the bullish trend will continue for Airtel. Its operational performance is excellent and it’s also likely to benefit from tariff hikes and improved data traffic.