The recent special bulletin brought out by the NSE on the occasion of the index touching 10,000 had an interesting comparison over the last 12 years time frame. Back in 2005, the weightage of banking and financial services in the overall Nifty was just about 12%, with automobiles, oil and IT having around the same weightage in the index. By 2017, this situation had changed drastically. While the other 3 sectors have lost weightage share in the Nifty, the banking and financial services now account for 35% of the weight in the Nifty. That can be partly attributed to more banks joining the index but is also largely explained by the growth in the value of banking stocks.

A more specific case of how banking has outperformed…

A better and more scientific way of looking at the performance of banking stocks will be to see how the banks would have performed if a retail investor had done a SIP on a banking fund by investing just Rs.5000 each month. The chart below captures the gist of this scenario. 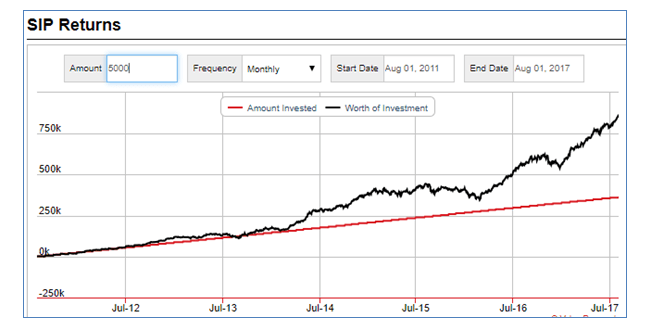 The chart above shows the performance of your SIP of Rs.5000/- per month in the Pru ICICI Banking & Financial Services Fund. Since early 2016, there has been a sharp divergence between the amount invested in the SIP and the market value of the SIP. In fact, in the last one year alone the Pru ICICI Banking Fund has returned over 60%, a truly laudable achievement at a time when the Nifty has been a lot more volatile. The question, therefore, is why have banking stocks been in the thick of action and are the factors driving banks really sustainable?

What exactly is driving the banking stocks and is it sustainable?

There are 7 broad reasons why banking stocks are attracting investor interest. Something is surely changing in the Indian banking space…

Last, but not the least, there is a silent shift happening in the way individuals allocate money to asset classes. With the combined impact of demonetization and lower yields, investors increasingly prefer the higher alpha of equities. Banks could be the big beneficiaries as this will be a boost for their fee income. Even Dr. Viral Acharya, the RBI governor has pointed to this trend. This shift in the savings pattern could be the biggest factor working in favour of banks and financial services. The rally in banks is, perhaps, just an acknowledgement that there is a paradigm shift happening in the way investors need to look at banking stocks.