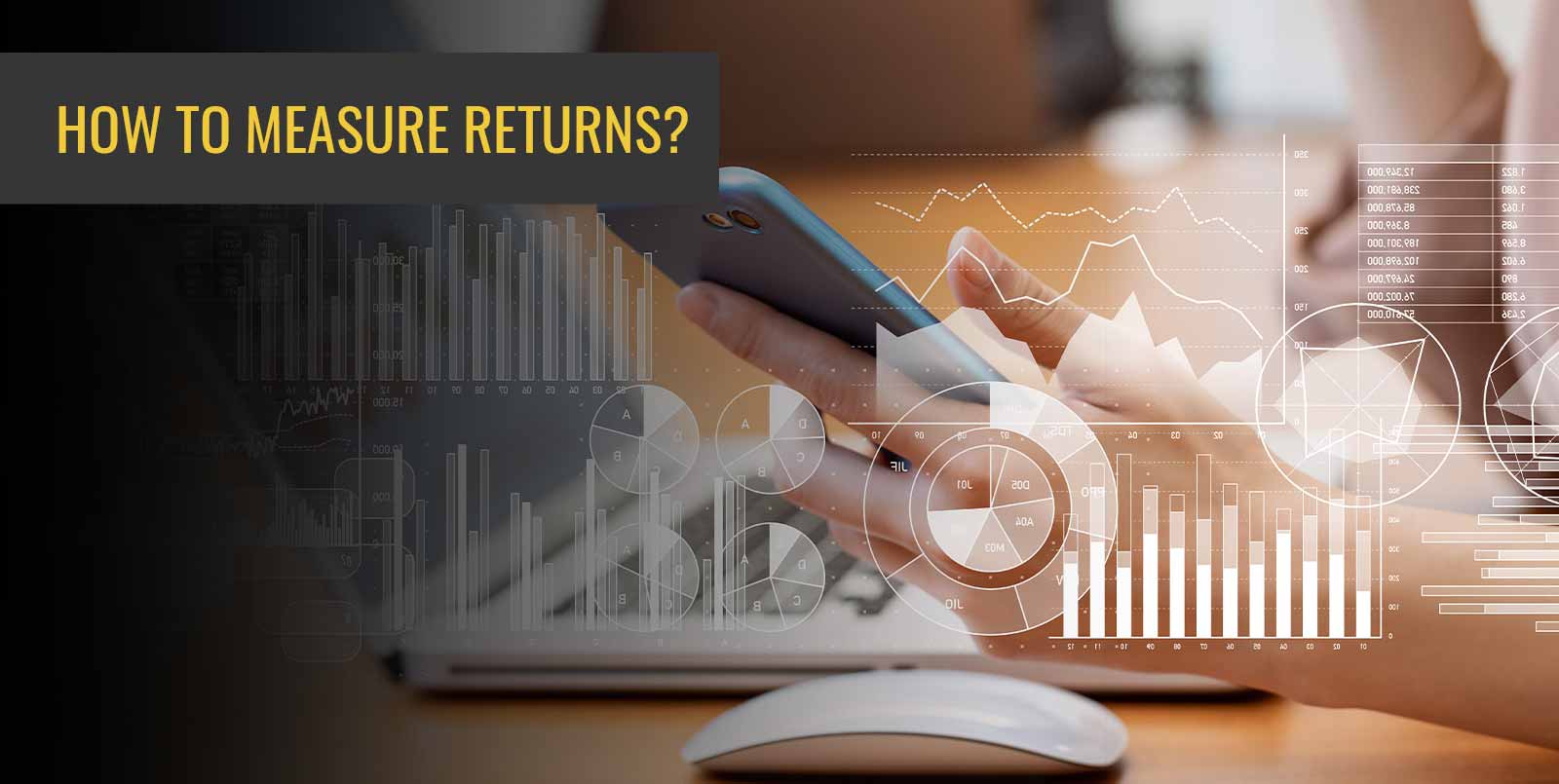 When we think about investment, basically everyone is speaking about the returns it can generate from it. In simple words returns means – for every rupee person has put into investment, how much he earned from that investment? While the basic mathematics formulae are there to measure returns – in financial markets it needs to be analysed with some perspective. While in mathematics the returns generated are just seen as numbers, in investing it has lot deep meaning. Reason being there are different asset class, having different risk parameters and investors having different time frame as well. Hence it becomes imperative to understand the idea to measure returns in detail. As based on the expected returns (over different time frame and horizons) out financial goals would be set.

Apart from this there is another important factor about returns. One always compares returns of different asset classes and based on those returns out-performance or any under-performance of the particular asset class is measured. Sometimes returns are compared against the benchmarks. In simple words – while there would be returns comparison done between returns generated by precious metal and returns generated equity indices and other asset classes. Like the following charts indicate towards the compounded annual growth rates (CAGR) in percent of Sensex, gold and silver for different periods.

While as a layman we speak about absolute returns and simple returns, in the financial world there are few jargons used to showcase returns. While the words like CAGR, Holding Period returns and compounded returns look like complex concepts, it is not that complicated. Here we present very simple ways along with examples to calculate such different kind of returns.

Returns being a very important topic we have divided this blog it in two parts. While the first one talks about Simple returns, annualised returns and compounded returns. The second part speaks about CAGR, Holding period returns, Rolling returns and Scheme returns.

When we speak about calculating or measuring returns, there are three important factors – amount invested (Known as principal invested), returns generated on the principal and third important factor is time one has been invested for. As regards time, usually it is considered as one year period to take it to the common base, however based on the time frame as well there are concepts of calculating returns.

So the three parameters are as follows

It is simple here as all three parameters are known and have a similar base. However new entrants get confused when every parameter involved here changes. What if the investment was for more than one year? What if investment was made in two parts (Rs 250 on January 1, 2020 and another investment of Rs 250 on July 1, 2020)? What if investment is made at regular intervals every year? Going ahead in the blog we have discussed simple methods and examples to measure returns.

For example, suppose Mr. X had invested Rs 1,000 in one mutual fund and now the current value of the same stands at Rs 1,200.

The following table and chart gives an example of how returns are generated by different investments.

Thus, simple return is only the change in the value of an investment. There is no specific time frame given here. The returns may have come in one month, one year or even five years. Hence, while simple returns are an easier to calculate, it is not considered the best way to measure returns. As the third factor Time is not considered – there is no rationalization. June in above chart the best returns are generated by Investment option D. However as we stated, we need to look at investment with a time perspective as well. So Just check what happens if we add a time frame to the same data.

As we added the time frame (Months in this case) the perspective changes and suddenly the Investment option A becomes the beast one. This brings us to the next method called as annualised returns.

As in simple returns we only calculated the returns generated in percentage terms, the time factor was missing. And in investment – time frame is very important. Reason being, financial goals are mostly time based. Hence to rationalize the time factor usually the one year basis is considered.

Here the equation would be as follows

To be specific, in six months the mutual fund investment had generated 20% returns. To rationalize the same it is converted in to annualized (yearly time frame) which becomes 40%.

While here we have used number of months, it can be calculated based on number of days as well. Just replace the months with days.

There are advantages here as annualised returns gives a very good comparative analysis based on the time frame. Like there are two different asset classes. Investment A generated 10 percent return and another investment D generated 40 percent returns. However, it is just simple returns and there is no time frame mentioned about it. If one calculates only based on simple returns, D seems to have performed well. However when we attach the third important factor called Time, the things may change. Like Investment-A generated 10 percent in 2 months and investment-D generated 40 percent in 10 months. On annualized basis investment-A looks like a better option than the Investment-D. This means, with element of time being involved in analysis, perspective changes completely.

As we are now aware with the important factor called time frame, it is time to understand the eight wonder in the world – called Compounding. Though the jargon compounding looks a complex word, it is actually very simple.

The following chart clearly indicates how the returns generated in absolute number increases over the period of ten years. In following example the graph shows, how the simple interest returns would be and how significantly the compounding effect outperforms. While at simple interest the Rs 10, 000 becomes Rs 20,000 after 10 years, in the compounding the same becomes Rs 25,937.

Compounding in simple words is series of gains on initial value of investment over a period of time. For example, Mr. X has invested Rs 10,000 at 10 percent per annum for three years. In compounding the returns would look like as follows.

If we had calculated by normal simple interest way of calculating returns, 10 % per annum would have been like,

There is Excel Sheet formula provided for calculating compounding returns. The formula here would be put as

The CAGR calculation is based on an assumption that the returns generated would be re-invested in the same instrument. The following example will clarify the calculation.

Let’s calculate the CAGR, which we know captures the impact of both dividend payments and compounding.

Now the time factor must be analysed. From June 30, 2014 till January 1, 2016 the investment was held for 550 Days around 1.51 years. Putting in the formula of compounding interest, the per annum returns would be 43.65 percent. When longer period returns of different mutual funds are shown in open domain- it is given in the CAGR format.

Holding period returns (HPR) is calculated for a fixed period such as one month, three month, one year, three years or since inception. The return is calculated using CAGR if the holding period is over one year and simple or absolute returns for less than one year. Holding period returns may not present an accurate picture of the returns from a fund if the initial value or the end value used for calculation was too high or low. But still the holding period return is a fundamental metric in investment management. The HPR measure provides a comprehensive view of the financial performance of an asset or investment because it considers the appreciation of the investment, as well as the income distributions related to the asset like dividends paid etc. The HPR can be used to compare the performance of different investments or assets. For example, if Mr. X had invested Rs 10,000 and after two years the investment value stands at Rs 14,400. So the CAGR would be 20 percent. But if during this periods he also got dividend of Rs 300 in first year and Rs 300 in second year. Now the returns would be Rs 15,000 (Rs 14,400 + Rs 300+ Rs 300). So, the CAGR here for two years would be 22.47 percent.

Rolling returns, also known as rolling period returns are annualized average returns for a period, ending with the listed year. Rolling returns is the average annualized return calculated for multiple consecutive holding periods in an evaluation period. For example, all consecutive one year returns in a three year period with a daily, weekly and monthly rollover is calculated and averaged.

By looking at rolling returns, investors are able to understand how a fund’s returns stacked up at a more particular point in time. If an investment displays a 9 percent annualized return over a 10-year period, this shows that if one had invested on January 1 in a base year (Start of investment), and sold his investment on Dec. 31 at the conclusion of Year 10, he earned the equivalent of 9 percent  per year. Yet during those 10 years, returns could have varied drastically. In year 4, the investment could have moved up 35 percent, while in Year 8 it could have dropped 20 percent. Averaged out, one earned 9 percent per year (the “average annualized” return), yet this 9 percent might misrepresent the investment’s performance. Rolling returns help us in finding out how the scheme or asset class performed during a particular period.

If one is looking at investing in a share for 5 years, he should check the historical 5 year rolling return for that particular share. By doing so, he will get a perspective of historical return range plus its average.  Based on the asset cycles rolling period Returns should be checked. If some is are looking at investing in equity, then please consider at least 5 years rolling returns or higher period.

The discussion so far was focused mathematical returns generated. However one must understand that, investors might have a return profile that is different, on account of the role of loads charged by the asset management company (AMC) in case of Mutual Funds.

In the earlier example, the CAGR was calculated with the closing NAV as Rs. 15. However, if an exit load of 1 percent was applicable, then Mr. X will receive only 99 percent of Rs. 15 i.e. Rs. 14.85 on repurchase. Thus, return as investor would be lower than the scheme returns.

Similarly, if the original investment had suffered an entry load of 2 percent, Mr. X would have bought the units at 102 percent of Rs. 10 i.e. Rs. 10.20. This would have brought down the returns. (Fortunately for the investor, entry load is no longer permitted). Loads thus drag down the investor’s return below the scheme return. Even taxes can pull down the investor’s post-tax returns. The returns generated from the scheme are taxable and as per regulation it would taxed. So, one must reduce the taxation impact as well while calculating returns.

All in all, Investor returns might vary from the scheme returns also on account of choices regarding investment schedule, i.e, additional investment being made during the period or redeeming a portion of the investment. In such a case, for the same period investor’s returns may be different from the published returns of the scheme.