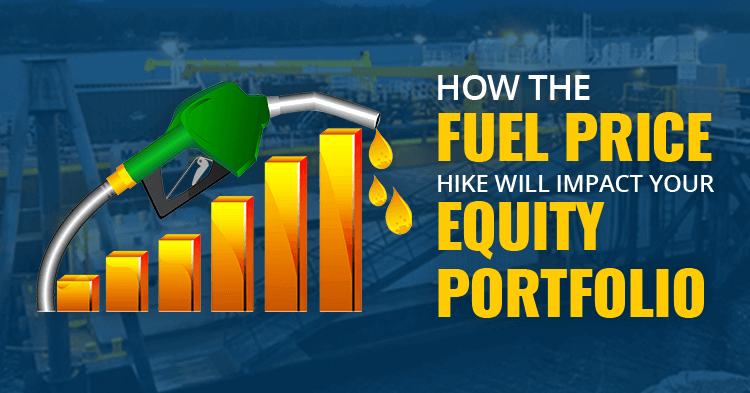 When the prices of petrol were cut by 1 paisa after 16 straight days of price hikes, there was a sense of dry irony in the entire situation. The price of 1 litre of petrol in Mumbai was already above Rs.85/litre. To begin, India imports nearly 75% of its daily crude requirements and hence its domestic price of petrol and diesel is largely dependent on the landed Indian oil basket. Look at the chart below… 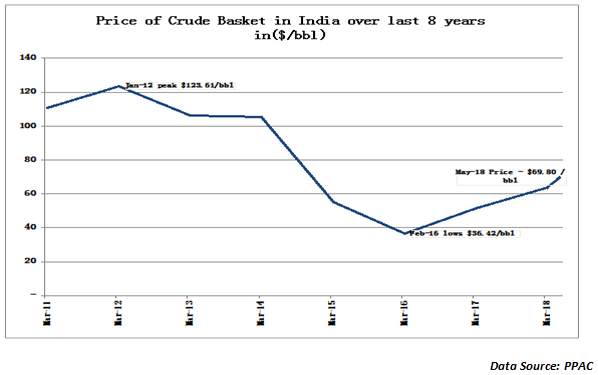 While the crude basket does play a role, the reason for high fuel prices in India is also the extremely skewed and escalated duty structure. That is what explains the huge mark-up on petrol and diesel over the ex-refinery cost. Also in 2015, the government had increased excise on petrol and diesel on 8 occasions but cut it only once. Do does this fuel price really impact your equity portfolio. Actually it does; in five distinct ways…

A push to inflation and interest rates in India

Higher fuel prices impact retail inflation in India in two ways. Firstly, fuel is part of the inflation basket and therefore impacts the overall inflation number. Secondly, oil has strong externalities since its impact is not only immediate but also downstream. For example, when the price of diesel goes up the cost of transportation goes up and that builds inflation into almost every product that has to be transported from one place to another. Higher oil price also means imported inflation and that also adds to the CPI inflation in India. When inflation goes up the RBI will be compelled to raise interest rates at some point. That will have a negative impact on the debt portfolios of banks and also make borrowing costlier for Indian companies. That trend was already visible when RIL had to borrow short term monies at 100 basis points higher than last year.

Negative for equity valuations in India

Why would a rise in fuel prices be negative for equity valuations in India? The relationship is quite interesting. Higher inflation will lead to higher interest rates (or at least a rise in bond yields for sure). When bond yields go up, debt market investors will expect higher returns on their bonds. Since equity is a higher risk investment, the required return for equity investors will also go up proportionately. Normally, companies are valued by discounting their future cash flows back to the present based on the Weighted Average Cost of Capital (WACC). When the bond yields go up the WACC goes up and hence the companies are valued lower.

If you are wondering why the INR has weakened in the last couple of months, there are two distinct reasons for the same. Firstly, when the oil import bill goes up your trade deficit widens (close to $15 billion per month) and the Current Account Deficit also widens (already above 2% of GDP). CAD widening is normally the first and most basic trigger for weakening of the INR. Secondly, when the inflation goes up, the RBI is expected to respond by hiking the rates. If RBI does hike rates then the impact shows up in a weaker rupee. That is what we are seeing now. When the rupee weakens, it is negative for importers and for companies that have borrowed in foreign currency. If these companies are in your portfolio then you better watch out.

What about downstream oil companies?

In earlier times, the government used to make the downstream oil companies pick part of the oil subsidy burden and sell at lower prices to the public. That was how the prices were maintained at lower levels despite higher crude prices. However, with the government shifting to free pricing of oil, that option may not really be open. That is good news for downstream companies as their business model becomes more predictable now. Also, the inventories that they hold will now be valued at a much higher price adding to their profits.

In a nutshell, the impact of oil will be much more far reaching encompassing interest rates, rupee and corporate performance.