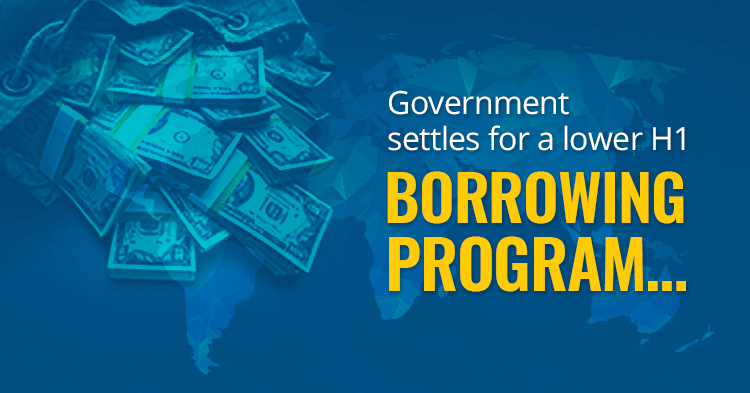 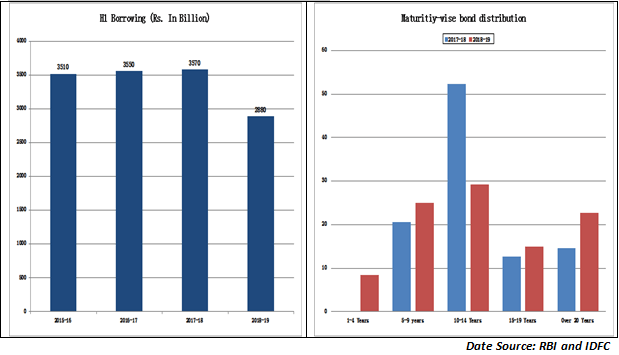 Exactly 4 days before the announcement of the government borrowing program, officials of the Finance Ministry had a high-level meeting with bond traders and primary dealers. The purpose was to gauge the appetite for bonds that the government planned to issue to meet its huge borrowing program. Remember, that the government had raised the fiscal deficit target in the Union Budget 2018 by 30 basis points and that had to be financed. But the big challenge was rising yields! But why have bond yields been rising so rapidly?

There were 3 principal reasons for the sharp rise in bond yields. Firstly, CPI inflation had moved up by nearly 380 basis points since July 2017 after the Kharif output turned out to be lower than2016. Food prices promise to remain high this year due to the assured MSP at 150% of production cost for Kharif crops. Secondly, the government fiscal deficit targets were loosened by 30 basis points and that was indicative of crowding of the borrowing program, pushing yields higher. Lastly, rising bond yields was a global phenomenon and the US Fed guidance of 4 rate hikes in 2018 accentuated this trend. These factors led to a sharp spike in bond yields and a fall in bond appetite.

Why did higher bond yields have an impact on government borrowing program?

We know that there is a negative relationship between bond yields and bond prices. When the bond yields spiked by 130 basis points, the prices of bonds obviously crashed! So, banks that were holding a huge pile of government debt were forced to take bond losses. SBI was the first example last quarter. Debt funds, especially the ones with longer average maturity took a bigger hit on their NAVs and so their appetite was also limited. We finally, come to the foreign portfolio investors. With the big question mark over the trajectory of US Fed rate hikes, it is doubtful if FPIs will evince interest in GOI bonds even if the limits are enhanced; something that will only be decided in the month of April. The chart below captures how the rising bond yields suppressed demand for government bonds … 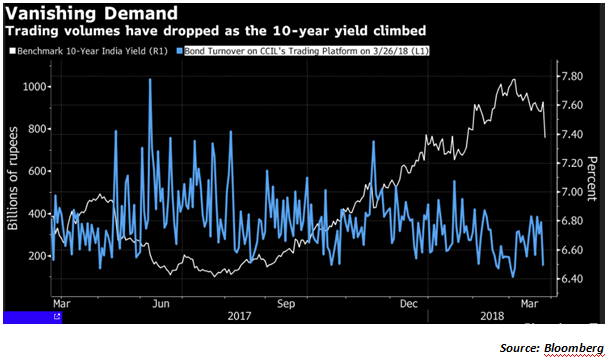 As can be seen from the above chart, the rise in yield has had a negative impact on bond volumes. It is this point that had worried the government ahead of the announcement of its full year borrowing program and that is exactly what emanated from the bond borrowing for 2018-19.

Highlights of the government borrowing program for H1: 2018-19

The government of India will be raising Rs.195,000 crore through the issue of short term treasury bills with nearly 47% being focused on the 91-day category and the balance spread equally across the 182-day and the 364 day category. Thus two things have emerged from the government’s H1 borrowing program. Firstly, to keep liquidity abundant the government has reduced its overall borrowing program at the long end and has kept the program more aggressive at the short end. Secondly, by sharply reducing the borrowing program, the government has pulled down the yields by 20 basis points. This will ensure that banks and bond holders will have to make lower provisions on bond losses for the current fiscal ending March 2018.

Will the lower borrowing program pull down yields further?

While the borrowing program hints at keeping liquidity comfortable, what happens to the yields? Is the 20 basis points fall in bond yields on 27th March a one-off event or could yields actually drift lower? Predicting yields may be a tricky game but there are 2 things to remember here. Firstly, the government will have to look at alternate sources of funding its deficit. For example, the government has increased its NSSF withdrawal by Rs.25,000 crore this year. Large PSUs and even the LIC may be asked to chip in, which means the deficit will still be funded through alternate means. Secondly, the big question mark remains over the Fed trajectory and if the RBI is required to hike repo rates then the entire scenario could change. Government finances may be poised for an interesting year ahead!