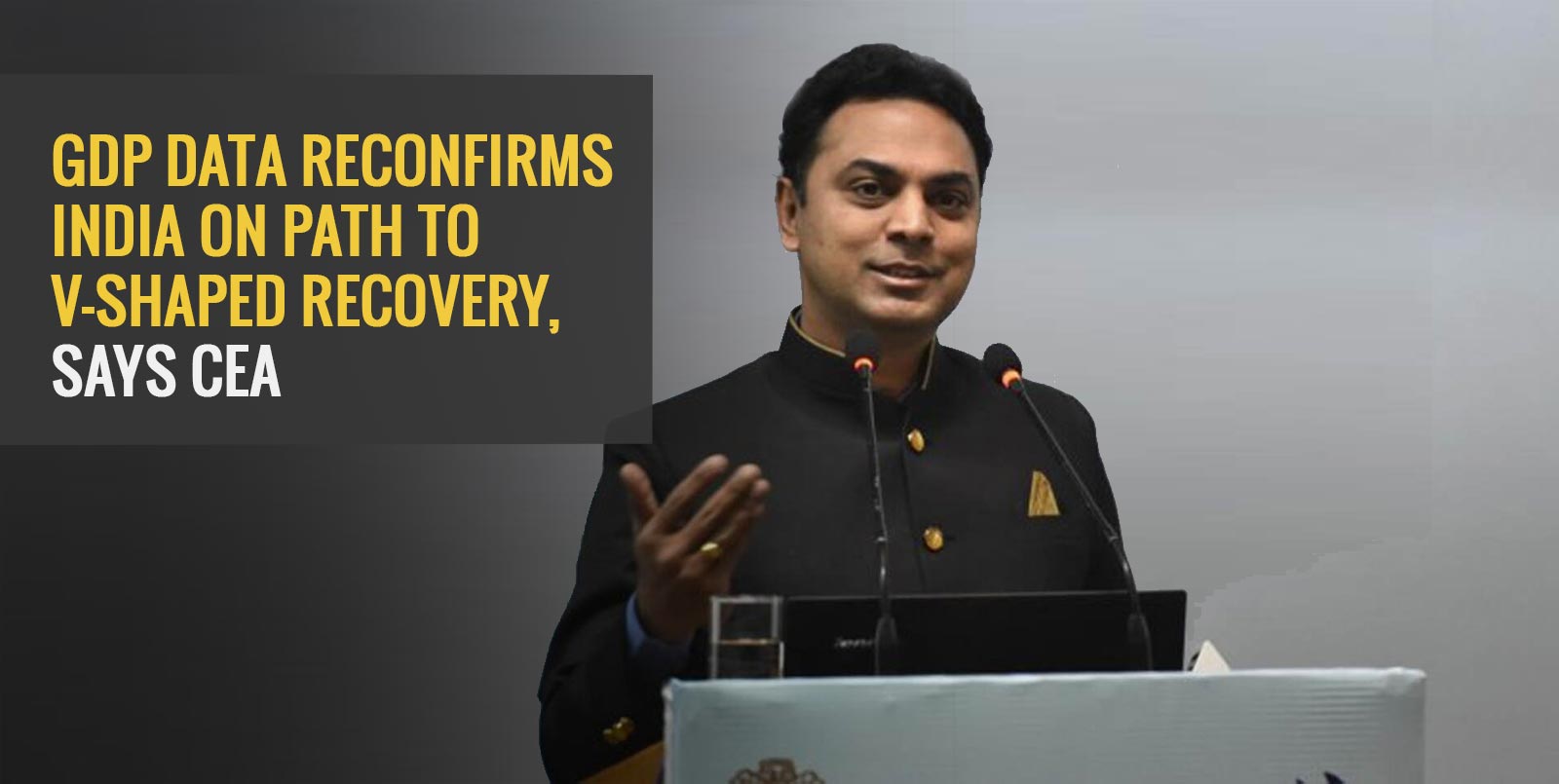 Even as India’s GDP growth data for the first quarter of the fiscal has come in, the country’s chief economic adviser (CEA) K V Subramanian has noted that the numbers reinforce the government’s stance that a V-shaped recovery is on the cards.

A V-shaped recovery is a term used to describe a sudden decline of the economy, which forms a small trough and eventually leads to a recovery. This means that the economy jumps back to the baseline pre-crisis.

The country’s GDP growth rose to 20.1 per cent for the first quarter of the current fiscal, aided by last year’s low base. In Q1 FY21, the GDP had contracted 24.4 per cent as the pandemic induced a nationwide lockdown, and business activity came to a halt.

The CEA has noted that India’s macroeconomics are solid and that structural changes to the economy, the capex thrust, and the faster pace of vaccinations will aid the country’s V-shaped recovery.

The Budget had increased capital expenditure by 34.5 per cent to Rs 5.5 lakh crore for fiscal year 2022, aimed at boosting growth. In the Economic Survey released in January 2021 ahead of the Union Budget, it was maintained that India’s GDP was poised to grow at 11 per cent for the full fiscal, while the Budget had pegged the growth at 10.5 per cent. Later, the RBI cut its projection to 9.5 per cent on the back of the second wave of the pandemic from its earlier 10.5 per cent projection. However, the chief economic adviser has maintained that India may see double-digit growth and that any stimulus withdrawal in other nations may not make any major impact on India because of its solid fundamentals.

The Economic Survey also noted that India was expected to see a V-shaped recovery because of the vaccination campaign while adding that it would take two years for the economy to go back to the pre-pandemic levels. The V-shaped recovery, the CEA had then noted, would be because of the revival of power demand and GST collection, among other factors.

The latest GST collections for July sales, released in August, has breached the Rs 1 lakh-crore level for the second time in a row. This, according to experts, is indicative of a boost in economic activity. E-way bills, which are compulsory for any goods transport between states (for goods that are more than Rs 50,000 in value), had increased to over Rs 6.4 crore in July from the Rs 5.4 crore in June, and has steadied at Rs 6.3 crore for August. Further, electricity demand has increased 18.6 per cent for the month of August, remaining higher than the pre-pandemic levels because of a boost in economic activity, according to reports.

Further, the Economic Survey had noted that the government had lent a push on the supply-side by bringing in schemes such as production-linked incentive schemes (PLI). The manufacturing sector, the Survey had observed, received a boost as a result, apart from a rise in pent-up demand.

In the latest GDP data released on Tuesday, the manufacturing sector grew by 49.6 per cent, while construction saw a 68.3 per cent growth, both contributing to the expansion of the GDP for the quarter.

During the fiscal year 2020-21, India’s GDP saw a contraction of 7.3 per cent, the first such negative growth in four decades. The fourth quarter of FY21 saw a growth of 1.6 per cent. Factors like the GDP for the first quarter of the current fiscal expanding at the best ever rate and the increase in vaccinations may contribute to a speedy economic recovery.

The chief economic adviser has noted that India is on the way to a V-shaped economic recovery, even as the Q1 FY22 GDP data for the current fiscal shows the best ever quarterly GDP growth at 20.1 per cent, driven by an increase in manufacturing and construction.

What is a V-shaped recovery?

A V-shaped recovery occurs when there is a steep decline of the economy, which follows a small trough and then rebounds sharply.

Is India poised for a V-shaped recovery?

According to India’s chief economic adviser, India is on its path to a V-shaped recovery as the GDP data shows an expansion and the country’s macroeconomic fundamentals are strong.

What is the GDP growth projection for FY22?

According to the RBI, India’s GDP is likely to grow at 9.5 per cent for FY22 while the Economic Survey of January 2021 pegs it at 11 per cent for the full fiscal.