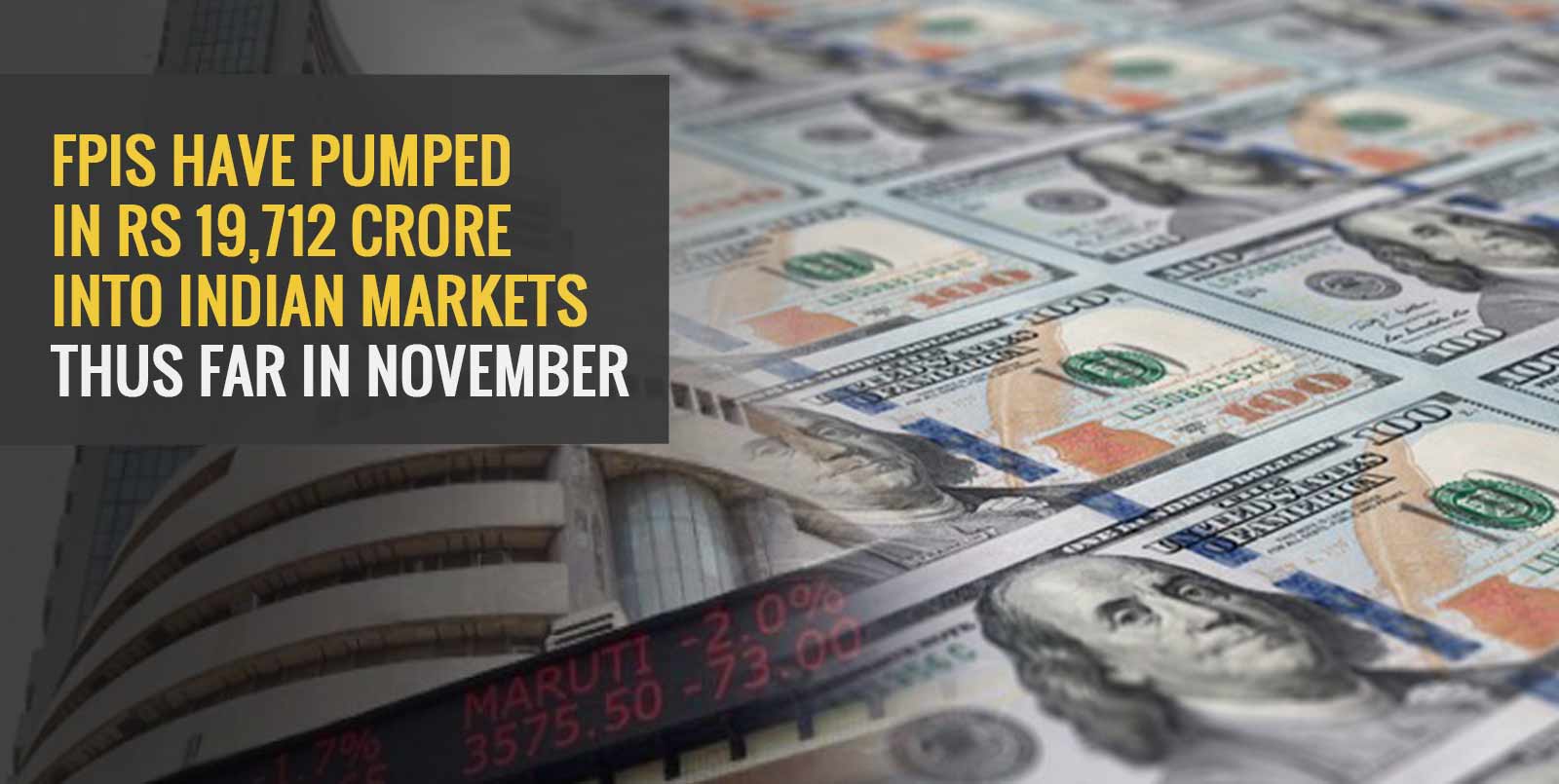 So far in November, foreign portfolio investors (FPIs) have been net purchasers in Indian markets, totalling Rs 19,712 crore. Between November 1 and November 18, depositories invested Rs 14,051 crore in shares and Rs 5,661 crore in debt, according to depositories’ data.

During the period under review, this resulted in a total net investment of Rs 19,712 crore. FPIs continued to be net sellers in October, with a total of Rs 12,437 crore.

“India remains an important and competitive investment destination in the long run. Despite sporadic and short-term hurdles, India is a promising growth market,” an expert stated. He went on to say that the net flows this week cannot be interpreted as a change in trend because global and domestic uncertainties remain. “This could be a tactical allocation by FPIs,” he said, adding that “in the coming weeks, one should watch the flow trends to better understand their investment pattern.”

FPIs have been sellers in banking and even performing sectors like IT for the first part of November, according to another expert. He went on to say that most foreign brokerages had a sell call on India due to valuation concerns.

According to him, “an expected higher degree of tapering by the US Federal Reserve may result in emerging markets, including India, receiving less foreign investments.” The only bright spot, he noted, is the drop in crude prices.

The November futures and options contracts will expire on Thursday of this week. There may be some market volatility in the days leading up to the expiry as traders race to either roll over or square their positions.

The Nifty 50 ended the week with a powerful bearish candle. The index attempted to break over 18,120 during the week but failed as selling pressure increased. Given the market’s narrow breadth, higher levels are unlikely to be sustained, according to analysts.

“The benchmark index is currently trading near 17,700, which is a critical support level. Similarly, Bank Nifty is trading near the support of the rising trend line. To place their transactions, traders should keep a slightly negative to neutral attitude. A break below 17,700 might lead to a test of 17,500 levels,” said one of the analysts.

Inflation will continue to be a source of concern for investors, as it is not proving to be as temporary as many central banks had projected. As a result, they may be pushed to hike rates sooner than intended. Any increase in interest rates depletes market liquidity, which can be harmful to equities.

According to depository statistics, net FPI buying totalled Rs 14,000 crore in equity from November 1 to November 21. However, this figure includes a huge primary market investment of about Rs 23000 crore, implying that actual equity inflow is negative. FPIs have been sellers in banking and even performing sectors like IT for the first half of November. Since most foreign brokerages have a sell call on India due to concerns about overstretched valuations, the trend shows that FPIs are likely to turn sellers with every gain.

Q1. What are the concerns associated with FPI?

The key risks that FPI investors face are those associated with various asset pricing, which happens as a result of the volatility of different financial markets in different countries, as well as any type of jurisdictional risk, such as changes in law, money laundering, and so on.

Q2. Who is eligible to invest in FPI?

As long as the entity fits the criteria, FPI is not limited to certain individuals. Individuals, businesses or organisations, and even governments are all included.

Q3. Can an FPI place an order with a stockbroker directly?

Yes, a Foreign Portfolio Investor (FPI) can place orders directly through a broker, much as a Foreign Institutional Investor (FII).