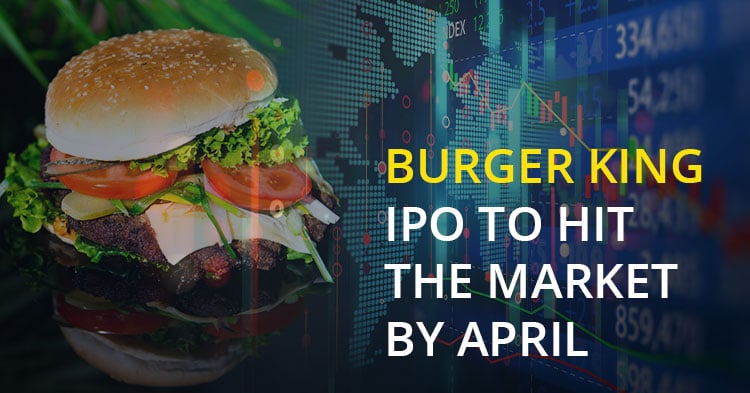 Burger King is already a 202 restaurant strong brand. Outlets can be found at strategically handpicked locations such as metro stations and key shopping-dining hotspots among other high footfall locations.

It has achieved this presence within about six years, since its market entry in 2014. Now Burger King India intends large scale expansion. This is the reason for launching its initial public offering. The QSR chain had filed its draft IPO papers with SEBI in November 2019. The approval came through at the end of January.

With a green signal from SEBI, Burger King is reportedly looking to have fresh equity shares worth a total of Rs 400 crore hit the market by next month, that is, April. Additionally Rs 6 crore worth of equity shares of QSR Asia, Burger King’s promoter, will be up for sale.

Should investors and stock market watchers be excited about this upcoming IPO? Well, according to Technopak, the brand is one of the fastest-growing international QSR chains in India. Additionally, here are 10 key figures to consider:

The shares of the company will reportedly be listed on BSE and NSE.

Roadshows are scheduled to begin next week and conclude by the end of the month, that is they will take place between mid-March and end-March.

Industry wise, F&B stocks attract investors because of the fact that they tend to attract sustained demand. QSRs currently account for 20% of the restaurant space in the country. Moreover, the sector is growing at 6% per year. Delivery apps such as Swiggy, Scootsy and Zomato have created a positive environment for the QSR sector.

Conclusion: While keeping an eye on news related to a company whose stocks you would like to purchase is a good idea, it is also important to get expert opinion prior to making purchase decisions. Especially if you are looking to trade for the first time, ensure that you sign on a broker with care. Your considerations should include brokerage fees (Rs 20 per transaction is a competitive rate), availability of technical tools (such as minute charts that can be accessed on Angel One) expert advice and timely updates about stock market happenings.