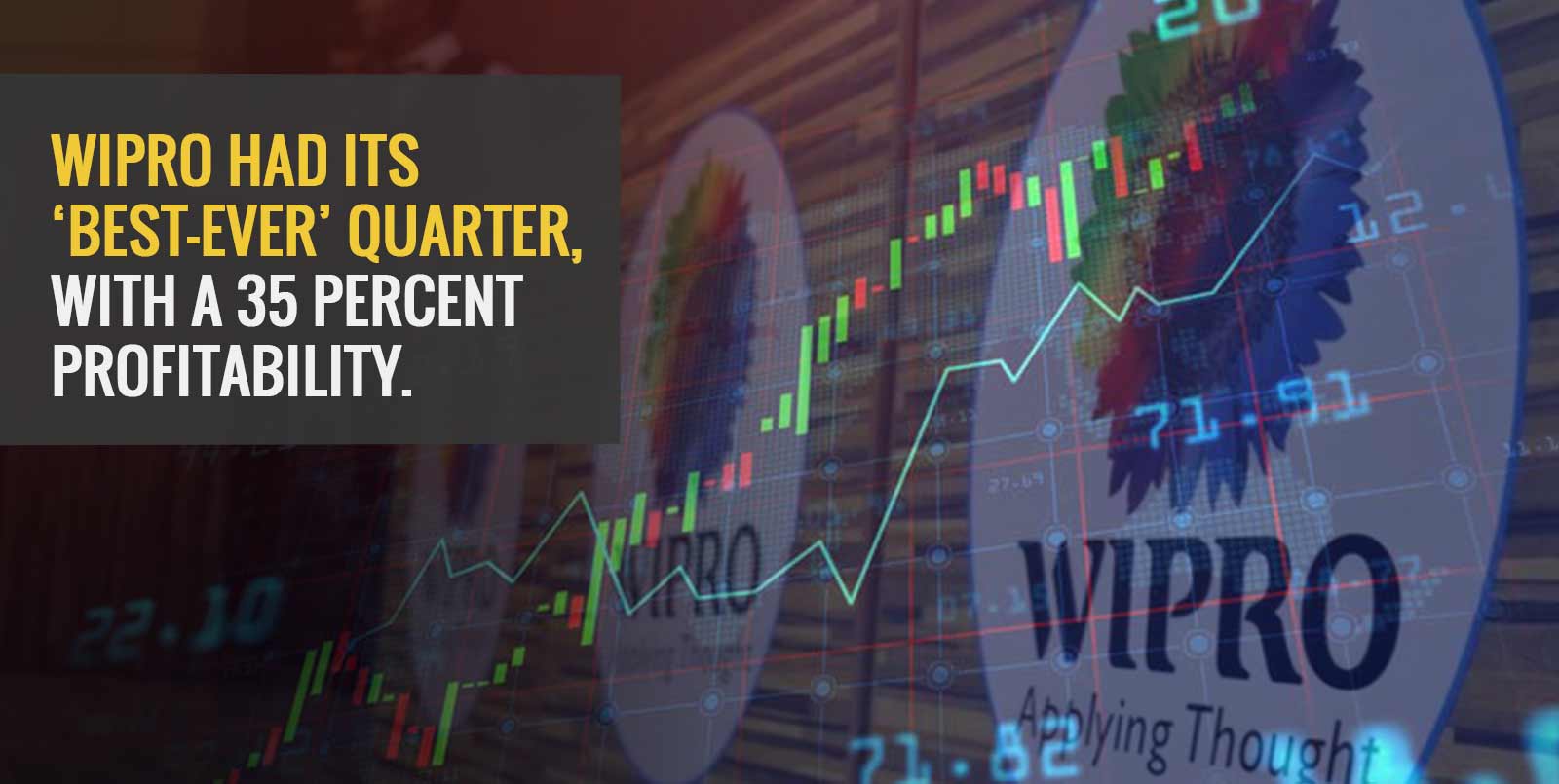 Wipro’s IT services division grew 21.3 percent in constant currency in the first quarter compared to the same period last year. However, the acquisition of a British consultancy and technology services firm, accounted for 7.7% of this. In the preceding quarter, Wipro completed the acquisition.

Nonetheless, the corporation had a very excellent quarter. Sequential growth was higher than the company’s own projections. Even after accounting for the Capco acquisition, CEO Thierry Delaporte said it was greater than the top end of the sales estimate. The strong demand environment, as well as Delaporte’s smart acquisitions and organisational improvements, are helping the company succeed.

After trade paused when the pandemic struck last year, India’s software services firms lost billings and saw their costs grow as a result of the halt in trade. Large deal wins and increased client spending on cloud computing and artificial intelligence have aided their recovery since then. During the reported quarter, Wipro reported a total contract value of $715 million. Eight new clients were added, two of which were in the $100 million range.

During the first quarter, Wipro’s margin was also eroded due to wage increases and other discretionary spending. Due to salary increases, rivals Tata Consultancy Services Ltd. and Infosys Ltd. have seen their margins decrease as well. However, as a result of major contract wins and digital transformation, their revenue increased.

With the exception of manufacturing, Wipro’s sales increased in the previous quarter across all important sectors. Consumer and energy were among the growth drivers, as were banking, financial services, and insurance. Before the results were revealed, Wipro’s stock rose 2.96 percent, compared to a 0.44 percent advance in the benchmark Nifty 50 index.

Wipro’s stock has risen to a new 52-week high

Wipro, owned by Azim Premji, hit a new all-time high on the stock exchanges on Thursday, ahead of its quarterly results in June 2021 (Q1FY21). Wipro’s competitors, Infosys and TCS, have already released their financial results for the quarter, and all eyes are now on the business, which is expected to post healthy earnings.

In the early transactions on the Sensex, Wipro set a fresh 52-week high of Rs. 579.75 per share. The stock remained close to it’s all-time high.

Wipro is on the rise, thanks to robust organic growth

Wipro’s topline performance for the June quarter was stronger than projected, thanks to solid growth across key verticals. The fourth-largest software exporter in the country also hired the most people in a quarter in at least the last 13 years. This, combined with an optimistic prediction of 5-7 percent sequential sales increase for the following quarter, indicates that the company is gaining traction, which will likely support the stock’s movement in the medium term.

Given the consolidation of sales from newly acquired Capco, investors expected a higher-than-usual sequential growth of 9-10% in dollar-denominated revenue for the June quarter. The organic revenue increase, excluding the acquisition effect, was projected to be about 3-3.5 percent.

Wipro’s revenue grew 12.2% sequentially to $ 2,414.5 million, exceeding expectations by a wide margin. It stated in the quarterly report that organic growth was at a 38-quarter high without providing specific figures. Assuming constant sales from Capco, the additional revenue growth of 250-300 basis points beyond investors’ projections can be attributable to organic momentum, which implies a 5-6 percent increase in the existing business. As a result, Wipro share may have outperformed larger competitors TCS and Infosys, which saw sequential revenue growth of 2.8 percent and 4.7 percent, respectively.

Due to the merger of Capco, Wipro’s operating margin decreased by 220 basis points to 18.8%. The pattern in deal wins and employee additions during the quarter suggests that business traction will continue. It secured eight significant contracts at a total of $715 million. The headcount surpassed 2,09,890 for the first time, thanks to a net sequential gain of 12,178 people. Wipro, like its counterparts, reported greater attrition, indicating a stronger sector-wide demand.

Wipro has surpassed the 200,000-employee mark

Wipro said that in the June quarter, it surpassed 200,000 people globally, with a total headcount of 209,890. During the quarter, the IT services firm added a net of 12,150 people, with attrition at 15.5 percent. Wipro CEO Thierry Delaporte noted, “This was 80% of what we added in the previous financial year and the highest in the recent decade.” In FY2022, he stated that the corporation would hire 33% more freshers than the previous year. “Growth is our top objective, and we’ll make sure that talent supply isn’t a bottleneck,” Delaporte added.

With the pandemic making the labour force more mobile, he added, higher attrition has become a universal concern. “We are adapting to it and have increased our intake of freshers from campuses around the world as well as our reskilling efforts,” he said. Salary increases for 80 percent of the company’s employees will begin on September 1st, marking the second wave of raises this year. A huge proportion of its workers will be promoted three times over the course of a year, from December 2020 to December 2021.

In the previous year, Indian services organisations have increased hiring, both freshers and lateral hires, as the demand for talent has increased due to an increase in digital transformation projects. In order to meet the need for talent in emerging technologies, organisations are also investing in upskilling and reskilling existing personnel.