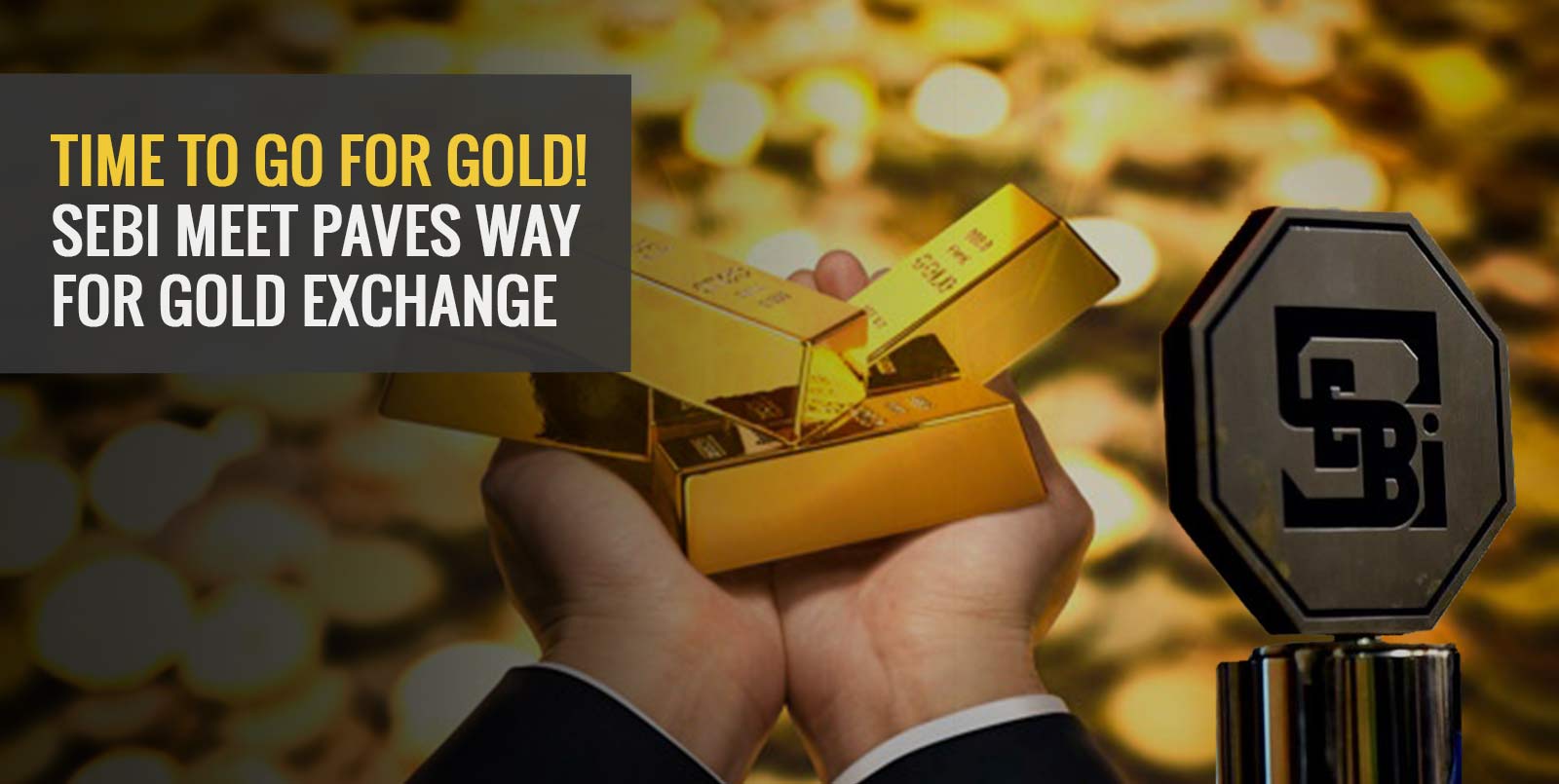 The Securities and Exchange Board of India (SEBI) has in its board meeting on September 28 given the green signal for a gold exchange in India by approving the framework for doing so. The move follows after the Finance Minister’s Budget announcement that the capital markets watchdog would act as a regulator for the gold spot exchange.  The board of SEBI also gave the nod for the SEBI (Vault Managers) Regulations 2021.

What is the nature of the gold spot exchange India will have?

A spot exchange is an e-marketplace where huge quantities of commodities are traded. These commodities include oil, steel or precious metals. When gold is traded in the electronic marketplace, it is called a gold spot exchange. India currently permits trading only in gold futures unlike other countries, where there are gold spot exchanges. Spot gold trading is essentially buying or selling the precious metal at live prices. Once spot gold trading in India is brought in, the gold exchange would offer trading of the yellow metal, wherein retail investors, foreign portfolio investors (FPIs), banks, and jewellers, among others, will be permitted to trade.

The framework for a gold exchange SEBI mooted started with a paper released in May 2021, through which it sought public comments. In its paper suggesting the framework for a gold exchange SEBI notes that the gold exchange would have a mechanism that will facilitate gold trading in the form of electronic gold receipt or EGR.  The SEBI proposal had suggested three denominations including one kilogram, 100 grams, and 50 grams in its initial draft but had added that the denominations of five or ten grams could also be incorporated to boost liquidity and draw more retail investors.

How will spot gold trading in India work?

An investor would need to buy the EGR for the underlying yellow metal which is stored in vaults. The e-receipts, much like shares that are held in demat form, can be traded on the exchanges and also exchanged for physical gold at vaults. Investors would be allowed to hold the EGRs for any amount of time they choose.

As per SEBI’s framework, the electronic gold receipt would be notified as a security. This would mean that EGR would be like any other securities that are traded on the exchanges, with mechanisms such as trading, settlement, or clearing. The EGRs would get the securities tag as per the Securities Contracts Act of 1956, reports note. The electronic gold receipts would be representative of a specific underlying gold quantity. So, if a holder of EGR seeks to convert the receipt into the underlying yellow metal they would have to surrender the same to a vault manager as per the SEBI (Vault Managers) Regulations.

Also Read: What is Spot Rates

Who is a vault manager?

The EGRs, as per the SEBI framework, would be created by vault managers who are SEBI registered with a net worth of Rs 50 crore, according to SEBI.  Vault managers would also be responsible for withdrawals, safekeeping, accepting deposits, and redressing grievances of traders, reports add. The vault managers should be entities that are incorporated in the country. Vault managers would be regulated as SEBI intermediaries. Also, any exchange that is either an existing one or a newly created one would be able to launch EGR trading, with various denominations, following approval from the capital markets regulator.  According to the framework for gold exchange, SEBI has proposed, there is an allowance for interoperability among vault managers.

Why the need for a gold exchange?

India is the second leading consumer of yellow metal after China, as per reports. According to a report by the World Gold Council, India’s demand for gold rose by a little over 19 per cent during the April-June quarter of the current year. The report cited that the total investment demand for the quarter rose by 6 per cent to touch 21 tonnes as against the 19.8 tonnes during the same quarter a year ago. In terms of imports, the import of yellow metal in the country went up to a little more than 120 tonnes during the quarter, when compared to 10.9 tonnes for the same quarter in 2020, according to data from the WGC.

Although India is one of the leading consumers and importers of gold, the country doesn’t have a key role to play in price-setting globally for the yellow metal. India currently does not have a gold exchange on the lines of the stock market. With the setting up of a gold spot exchange India will be able to create a system to ensure the trade and delivery of the yellow metal. The setting up of a gold exchange would also ensure robustness and transparency, which would then usher in the capacity to set price rather than take price in the global commodities space. Experts have noted that the gold market in India has seen fragmentation in the past, and prices typically vary widely across locations and channels. With the setting up of a gold exchange India will be able to bring in uniformity in pricing and transparency. Countries like China and Turkey have spot gold exchanges.

Following the idea of a gold exchange that has been mooted over the past few years and the handing over of the regulatory responsibility to the capital markets watchdog, the framework for a gold exchange for India took shape.

Also Read: Differences between Gold ETF vs SGB and SGB vs Physical Gold

Current investment options in gold include buying and storing physical gold in the form of jewellery, coins, or bars, apart from digital gold investment options. Some of the digital options include buying sovereign gold bonds, investing in gold exchange-traded funds, and digital gold wallets. For those interested in trading of precious commodity, India’s exchanges also allow for trading gold futures and options.  It may be recalled that in August 2021, SEBI had instructed the NSE’s registered members including stockbrokers to refrain from selling digital gold on their platforms by September 10, 2021. The market regulator had then stated that digital gold sale would breach the Securities Contracts Rules of 1957. It had then noted that under SEBI rules, BSE and NSE registered members could only participate in sale of securities and digital gold was not recognised as a security.

With the introduction of gold spot exchange India investors will be able to use one more trading option, apart from futures and options.

In its board meeting held on September 28, capital markets regulator SEBI gave its approval for a framework to launch a gold exchange in India. The board of SEBI has also given its nod to the SEBI Vault Managers Regulations 2021. Accordingly, an instrument that will represent a specific quantity of underlying physical gold will be created, called an electronic gold receipt. The framework also notes that any new or existing stock exchange would be permitted to launch EGRs as a segment.

A gold exchange will allow for spot gold trading through electronic exchange, wherein buyers and traders can trade the precious metal at spot/live prices.

The Securities and Exchange Board of India (SEBI) has been notified as to the regulator for gold exchange in India during the budgetary announcement of 2021-22.

There has been no option for spot gold trading in India till now but the go-ahead for setting up a spot gold exchange will do so henceforth. As of now, India allows for gold futures and options trading.

The electronic gold receipt (EGR) is an instrument that represents physical gold and is like other securities traded on the exchange and will have trading, settlement, and clearing features like any other securities.

The vault manager will be registered with SEBI and is responsible for creating electronic gold receipts, safekeeping gold, accepting deposits, enabling withdrawals, and addressing grievances. Vault managers would need to have a minimum net worth of Rs 50 crore.

Some of the benefits would be provision of a uniform and transparent platform for buying or selling EGRs, creating a standardised price structure for gold, ensuring liquidity and quality assurance for the yellow metal.

Yes. According to SEBI, any recognised stock exchange, new or existing, can launch trading in electronic gold receipts as a separate segment, with its approval.