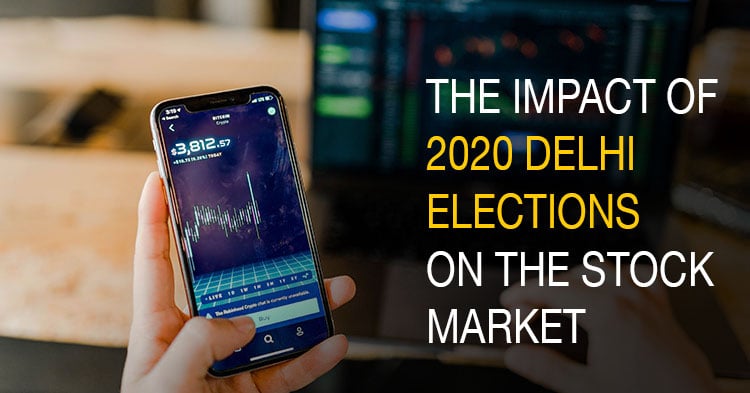 Delhi Election Results for 2020 were just announced to the public a few days ago. Aam Aadmi Party (AAP), Bharatiya Janata Party (BJP) and Indian National Congress (INC) were the three key players to look out for. Delhi, being the capital of India, tends to have a stronger impact on the stock market when parties are elected to its legislative assembly. We will address the stock market updates before and after the Delhi Election Results for 2020 were declared. But first, how does election day impact the stock market?

How Elections Impact the Stock Market

Alternatively, if the public perceives that the government will be indecisive or fractured in its mandates, then there is some uncertainty. This leads to stock market updates where certain indices like BSE Sensex and Nifty50 tend to underperform. With this knowledge, let’s learn the results of 2020’s Delhi Legislative Assembly Elections.

For instance, in the 2015 Delhi elections, AAP was set to win the most seats in the national capital for the first time amidst a central BJP backdrop. Understandably, investors were skeptical of the new leaders. Their worries regarding reforms in foreign investment rules, labour laws, and the general ease of doing business translated into Nifty and Sensex closing at lows on election day. Hence, experts suggested that since the 2015 elections replaced one ruling party with another, the underperformance of indices was seen that day.

Aam Aadmi Party (AAP) lead with 62 seats, raising the political stature of AAP leader Arvind Kejriwal. This was only slightly less than the 67 seats won by AAP last year. Those 5 seats went to the BJP, who followed suit as the second most voted-for party, but only marginally so, with 8 seats in this year’s Legislative Assembly. However, this was an upgrade from the 2 seats BJP won in the previous elections. Finally, 2020 Delhi election results awarded no seats for the Congress Party. Here is how the stock market behaved prior to and following the results.

On Tuesday, 11th February, this was how the following stocks traded at the following time periods before the Delhi election results for 2020 were announced.

10:20 am: Stock market update showed that both Nifty and Sensex were strongly bullish with their rates upping by 1% each while tracking the strong signals from the global equities market amid Delhi’s election results day. BSE Sensex traded higher by 400 points 41,390 and Nifty50 also traded higher by 121 points at 12,150. While PSU Banking Index and metal gained the most today, all market sectors traded in the green.

11 am: Axis Bank, Tata Steel, SBI, UltraTech Cement, IndusInd Bank, ICICI Bank, and ITC and were among the top who profited from among the Sensex pack. TCS stock was the only one to have traded in the red. According to traders, participants in the domestic market were also tracking Delhi poll results.

3:45 pm (Closing Bell): Reversing the trend on election day after two days of closing at a low, both Nifty and Sensex closed 0.60% higher, as tracking the overseas trends led to heavy-volume buying in media and metal stocks. BSE Sensex closed higher by 236 points at 41,216 and NSE Nifty50 ended higher by 76 points at 12,107. All sectors except PSU Banking and PSU closed in the green today, with metal and media indices being at the top in terms of gain. Earnings from the December quarter were also anticipated by investors today.

Based on the opinions of experts, investors and traders were tracking the election results. However, it seems the 2020 Delhi election results had a relatively minor effect on trading patterns as compared to positive news regarding coronavirus and Q3 market performance of organizations. Since AAP has only secured 5 seats lesser than last year but is still in the majority, it’s likely that public perception of the government is relatively stable. Hence, stock market updates showed that Nifty50 and BSE Sensex closing slightly higher.

Congress did not procure a single seat this year which may have aided stable or positive public sentiments. Investors, however, should not worry too much about the impact of the election on the stock market. As per the fundamental principles of investing, long-term trends are not determined by emotionally driven short-term moves. Even in the cases where the government mandate appears fractured, markets tend to absorb losses and return onto their growth track.