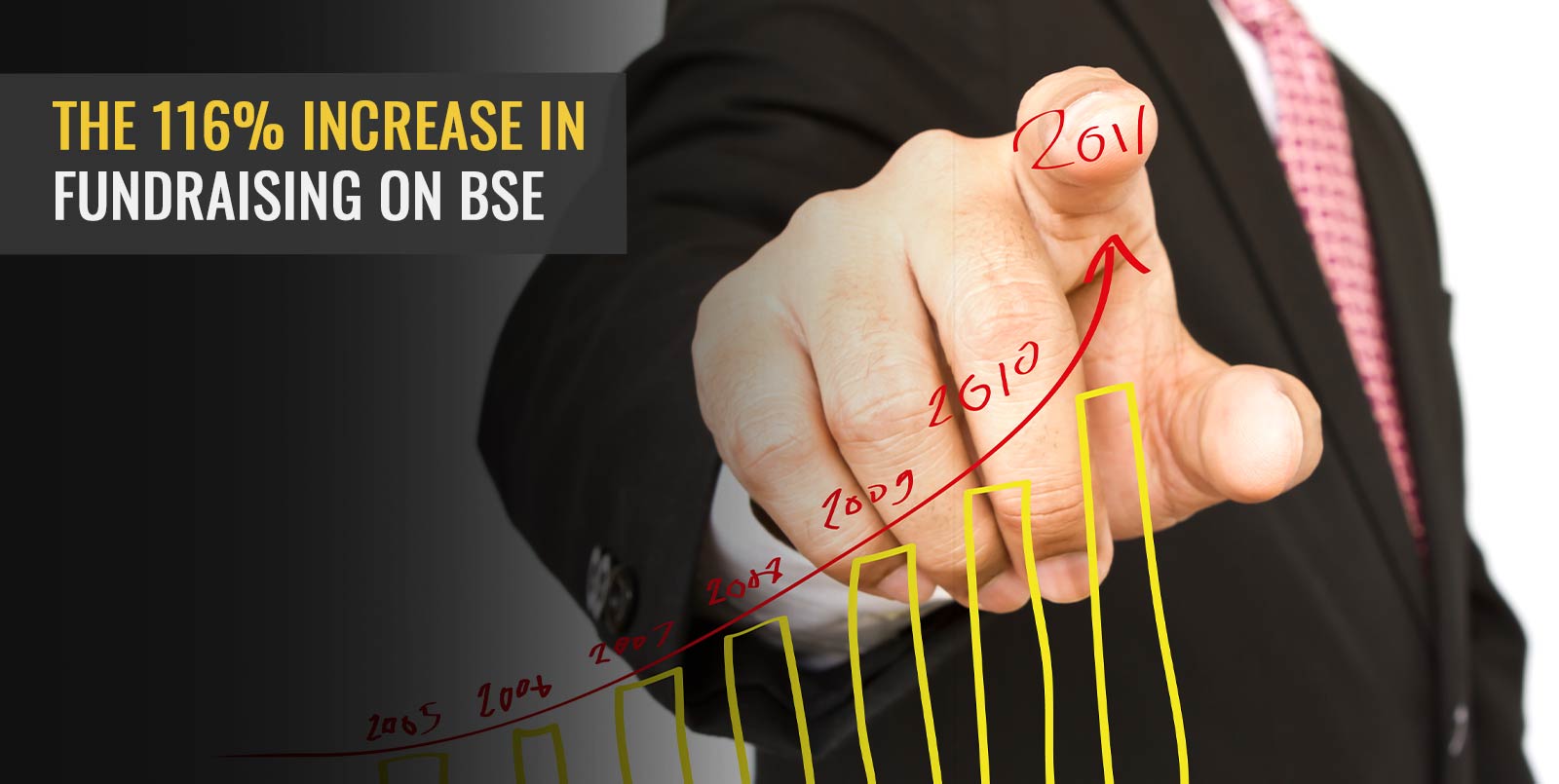 The economy had faced quite a bit of distraught over the past year. The common man had naturally considered that the valuation of companies and the fundraising campaigns would naturally decline and take a hit. However, to everyone’s surprise, India Inc on BSE has raised more funds in 2020 than ever before.

All you need to know about BSE

Bombay Stock Exchange (BSE) was established in 1875 and has since been Asia’s oldest Stock Exchange. It has played a crucial role in establishing and building the Indian market with capital. BSE is a platform that provides an option to trade on several financial instruments like mutual funds, equity, interest rate, debentures, debt instruments, currency, and stock trading.

In 1986, the BSE SENSEX index was developed which helped to gain a measurable insight into the overall performance of the market. As of today, BSE has about 5,439 listings on the platform. BSE also offers a variety of options for different companies to list themselves. They have indices like BSE SENSEX and various S&P indices like S&P BSE LargeCap, S&P BSE MidCap, S&P BSE SmallCap, and BSE 500. Besides, BSE also established the India INX in 2016 thereby being the first international exchange of India. BSE also further launched an option to trade on commodity derivatives like gold and silver.

The strong uptrend in fundraising on BSE

Despite the drastic economic plunge that the pandemic took on society, the BSE platform has proved to be evergreen when it comes to raising funds for companies. On the 23rd of March, just when the lockdown began, nearly 45 companies had leveraged the BSE Bond platform to raise Rs. 51,989 Crores.

The irony of a pandemic-induced slow economy has been proved by the record-high capital that has been raised by Indian companies in 2020. It has defied all of the economic hindrances posed by the lockdown. The fundraising that happened through the facilitation of equity markets was at the highest peak of Rs. 1.7 Trillion in 2020 when compared to Rs. 1.6 Trillion in 2017.

One of the main enabling factors that led to this drastic leap in the capital accumulated is the strong participation of investors in IPOs offered by several companies. 15 primary IPOs contribute to raising Rs. 26,622 Crores which is 115% more than the capital raised by 16 IPOs in 2019. One of the main contributing equity stocks that produced the most gains was the SBI Cards IPO which raised Rs. 10,341 Crores.

Some of the other contributing factors are the large amounts of listing gains, high amounts that were raised through QIPs (Qualified Institutional Buyers), InvITs (Infrastructure Investment Trusts), and REITs (Real Estate Investment Trusts). Concerning QIPs, Rs. 84,501 Crores was raised which was the highest recorded amount raised in a calendar year. The largest QIP was by ICICI bank that contributed to 19% of the total QIP amount (Rs. 15,000 Crores) raised.

India Inc is the common term used to refer to the formal sector of the country. The surprising element comes into play where India Inc had raised a great number of funds even amidst risky times such as the pandemic. India Inc raised 116% higher capital in 2020 in comparison with Rs. 82,241 Crores and Rs. 62,651 Crores in 2019 and 2018 respectively.

How do companies raise funds on the BSE platform?

Now comes the question about how these companies raise funds on the BSE platform. BSE has a dedicated platform for startups including small and medium enterprises called BSE SME that allows SMEs and start-ups to list their companies. Over the last decade, about 311 companies have been listed on BSE, out of which 66 had been shifted to the main BSE platform once they had raised over Rs.10 Crores.

However, the only catch when it comes to being listed on BSE is to have your company up and running in the market for a minimum of 3 years. Also, the company will also have a capital of Rs. 3 Crores once it’s listed on BSE. First, the company decides to incorporate a merchant banker for the listing after which the documentation process begins. Then, the ROC will approve the opening and closing dates of the IPO after which the BSE SME will provide the allotment for the IPO.

With the BSE having ever-increasing funding for companies through IPO and other streams, the contributing factor is pointed towards the increasing number of investors. India Inc has raised nearly Rs. 1.7 Trillion in 2020 proving to have a 116% increase in fundraising compared to the previous year.