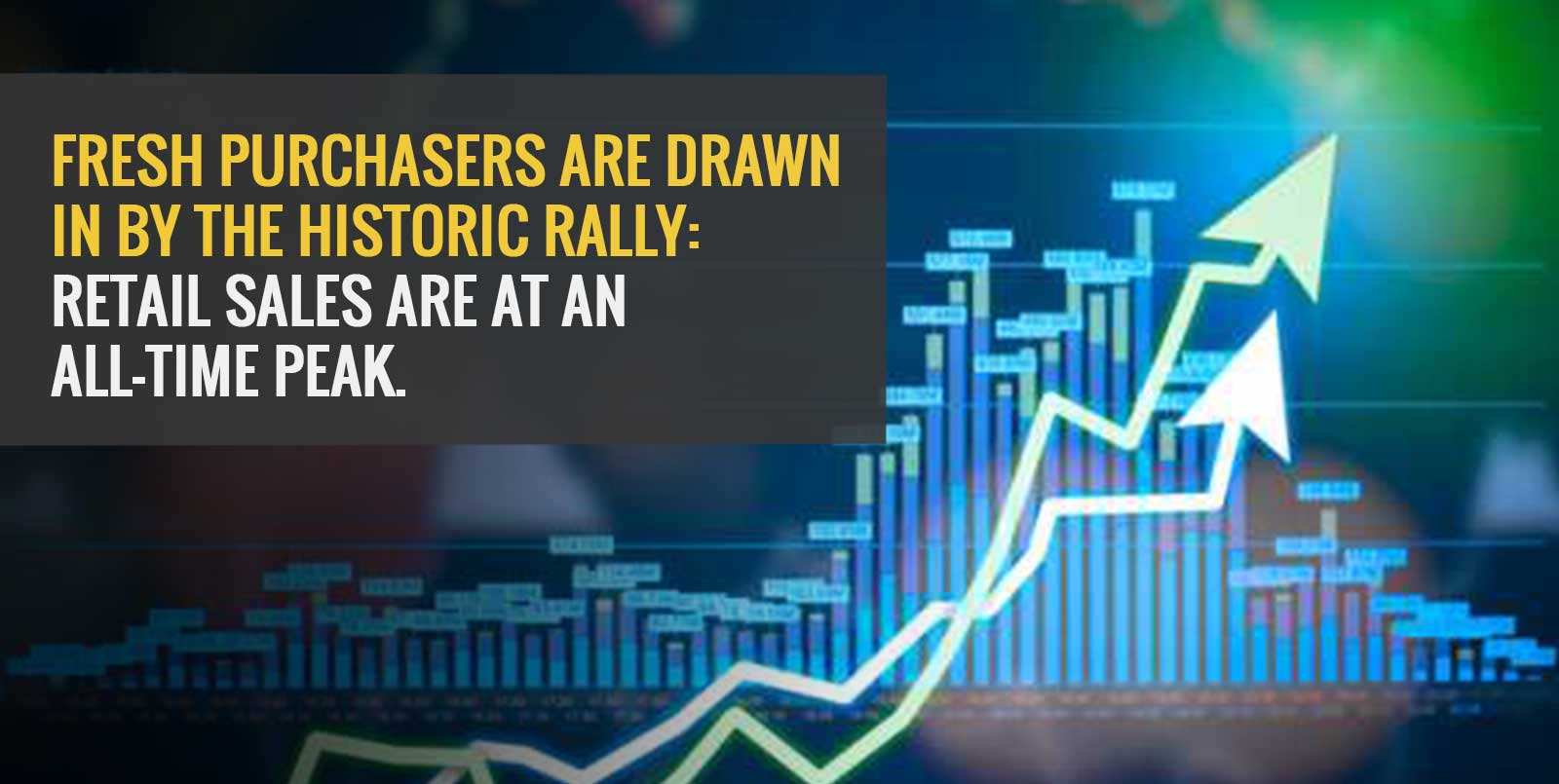 The recent stock market rise is expected to benefit Indian individual investors, who have boosted their involvement and holdings of NSE listed businesses during the last 18 months. In the quarter ended June 2021, retail holdings of NSE listed companies reached a new high of 7.18 percent, reflecting a strong increase in new investor accounts over the previous 18 months and an increase in retail involvement in both secondary and primary markets. In December of this year, it was 6.42 percent.

Retail funds have been channelled into the capital market thanks to a booming secondary market and a flurry of new listings. HNI holdings (individuals with a stake in a firm worth more than Rs. 2 lakh) grew to 2.10 percent as of June 30, 2021, up from 1.98 percent, bringing the total retail and HNI holdings to an all-time high of 9.28 percent.

Despite the fact that retail involvement has been increasing since January 2020, the six-month period between January and June 2021 saw a greater increase. While retail holdings fell from 7.01 percent in September 2020 to 6.9 percent in December 2020, they increased dramatically over the next six months, which saw record openings of investor accounts and money mobilisation through initial public offerings (IPOs) with significant retail participation.

Because ordinary investors and HNIs opted to invest directly in the stock markets, mutual funds’ holdings of businesses listed on the NSE fell slightly. In the quarter ended June 2021, MF holdings in NSE listed companies fell to 7.25 percent. Over the last five quarters, MF holdings have decreased. In March 2020, it was 7.96 percent. In currency terms, however, the holding has nearly doubled in value over the last five quarters, from Rs. 8.7 lakh crore to Rs. 16.33 lakh crore, in pace with market rises.

FPI ownership reached a 5-year high of 22.74 percent in December 2020, following record fund flows into Indian equities, but it has fallen in the subsequent two quarters, in line with a drop in fund inflows, particularly in the last quarter. Their stake in the company was 21.66 percent at the end of June 2021. FPIs invested a net of Rs. 2.74 lakh crore in Indian equities in FY21, on an average of Rs. 68,500 crore per quarter, but only Rs. 4,602 crore in the quarter ending June 2021.

Aside from retail, the government and private promoters are two additional categories that have seen an increase in their holdings. Due to a massive run-up in government share prices, the portfolio of government (as promoter) in businesses at National Stock Exchange grew to 44.42 percent on June 30, 2021, from 44.09 percent on March 31, 2021, a one-year high. Private promoter ownership has progressively increased over the last 12 years. It has increased since June 30, 2009, when it was 33.60 percent.

Is the rest of the market taking part?

Mid- and small-cap stocks have gained sharply in the last three months, while the Sensex has trailed. The premier index, on the other hand, has dominated the last four trading days, and large businesses are now driving this advance. In comparison to the Sensex’s 3.6 percent increase in the last four trading days, the mid-cap index has only gained 0.2 percent, while the small-cap index has actually lost 0.2 percent. While the Sensex rose 7.8% between May 1 and July 30, the mid- and small-cap indices rose 13.7 percent and 23.6 percent, respectively, in the same time period.

While IT businesses have been performing well, banks and financial services companies have performed well over the last few days. Banks and financial services companies are projected to do well in the future, because non-performing assets (NPAs) have not emerged as a major worry in recent quarters. While the Sensex has led the surge, market analysts believe opportunities exist across all market capitalizations and sectors.