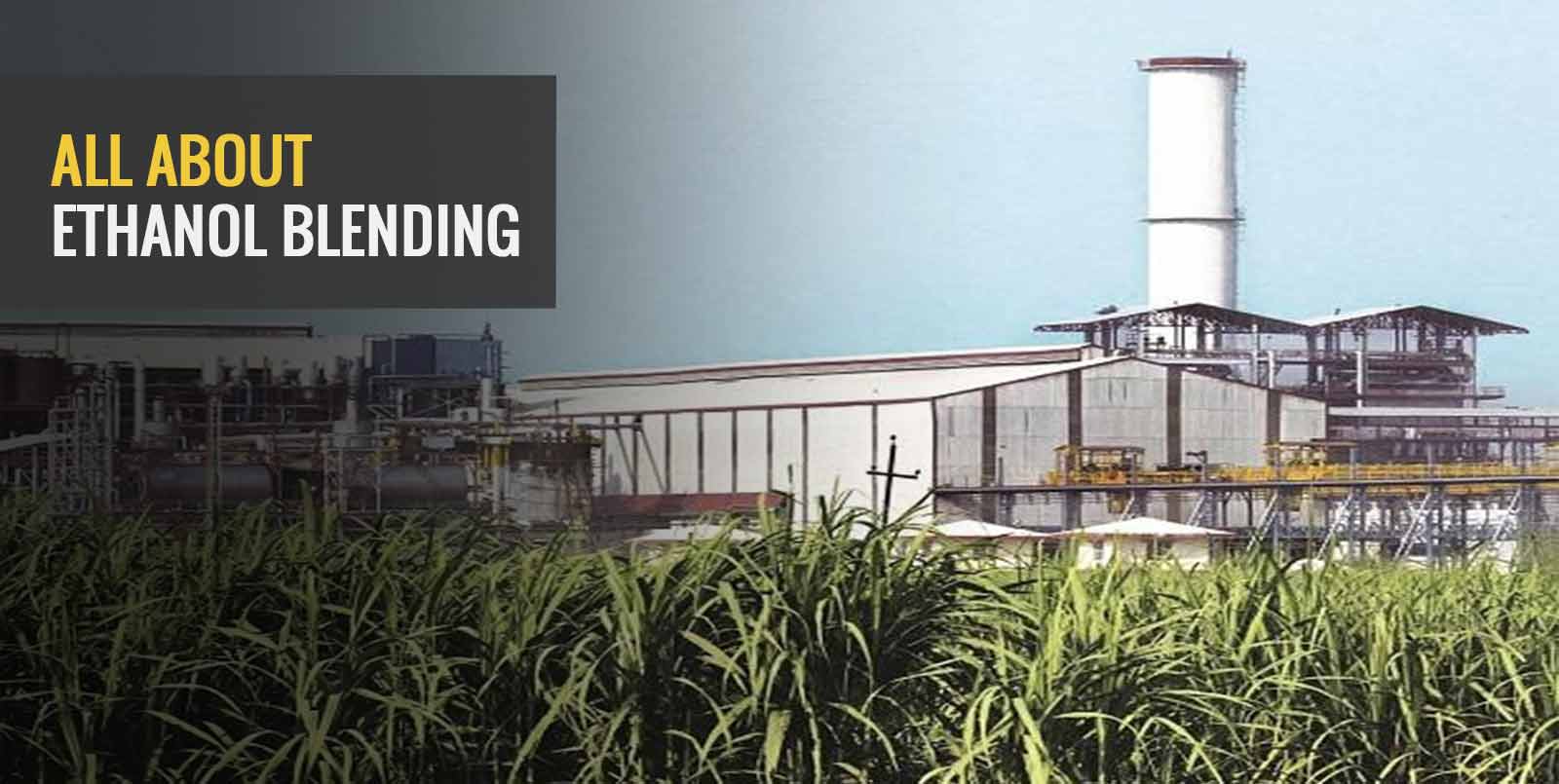 The combination of ethanol and motor gasoline can save money while also preventing climate change at a time when gas costs are growing almost daily and environmental awareness is at an all-time high.

This is why the government is pushing for ethanol to make up 5% of all gasoline sold in the nation by 2025, which is five years sooner than the original goal. This is what it indicates:

What is ethanol blending?

A biofuel, or one made by the processing of organic material, is ethanol. The car fuels we frequently utilise are also referred to as fossil fuels since they are primarily produced by the gradual geological process of fossilisation. In India, fermentation is largely used to produce ethanol from sugarcane. Because ethanol contains a lot of oxygen, it may burn gasoline more completely in an engine.

It can assist lower vehicle emissions and can be added to fuel in various amounts. Additionally, because it is made of plants, it is regarded as a renewable fuel.

What is Govt of India’s policy on ethanol blending?

The Government of India has been supporting the Ethanol Blended Petrol (EBP) Program with the goals of enhancing India’s energy security, reducing import reliance on gasoline, saving foreign exchange, addressing environmental challenges, and boosting the local agriculture industry. By 2030, the government’s “National Policy on Biofuels,” which was announced in 2018, set a target of a 20 per cent ethanol mix in gasoline. However, the goal of blending 20 per cent ethanol was moved from 2030 to 2025–2026 in light of the good results brought about by the government’s numerous actions since 2014.

The Hon’ble Prime Minister also unveiled a “Roadmap for Ethanol Blending in India 2020-25″ in June 2021, which outlines a comprehensive plan for reaching 20 per cent ethanol blending.

This roadmap also included a midpoint of 10% blending to be accomplished by November 2022.

However, thanks to the coordinated efforts of the Public Sector Oil Marketing Companies (OMCs), the program’s 10 per cent blending target has been met much sooner than the intended deadline of November 2022, when the Public Sector OMCs will have achieved an average of 10 per cent ethanol blending in gasoline across the entire nation.

In addition to improving India’s energy security during the past eight years, this accomplishment resulted in a forex effect of over Rs. 41,500 crores, a decrease in GHG emissions of 27 lakh MT, and the prompt payment of over Rs. 40,600 crores to farmers. With all the initiatives taken by the Government, the EBP Programme is on track to achieve the target of 20% blending by 2025-26.

Top Companies to be benefited from ethanol blending

Due to its biofuel nature, flexible fuel, also known as flex-fuel, is said to be less polluting than gasoline. People will be able to save more money because gasoline is more expensive than ethanol.

For its two- and three-wheeled vehicles, automakers like TVS Motors and Bajaj Auto have already begun producing flex-fuel engines.

Since ethanol production is essential to accomplishing this objective, several businesses are putting effort into meeting the expected rise in demand.

Here are the Top Four Ethanol Stocks to add to your Watchlist :

Its global presence with more than 750 references in more than 70 countries supports its market position.

At its location in Panipat, Praj is now building Indian Oil’s first second-generation ethanol plant. Additionally, it signed an MoU with the business to establish facilities for the manufacture of ethanol, biodiesel, and CBG.

Together, the two businesses will make it easier to sell and market the diverse co-products and intermediates generated by these facilities. Complete solutions in bioenergy, process technology (distillery and brewery), and wastewater treatment are provided by the engineering business Praj Industries. The business is the leader in the construction of domestic ethanol plants and equipment, as well as the establishment of domestic brewers.

Its market position is supported by its global presence, which includes more than 750 references in more than 70 nations.

Praj is currently constructing the first second-generation ethanol plant for Indian Oil at its location in Panipat. The two parties also agreed to develop facilities for the production of ethanol, biodiesel, and CBG.

The two companies working together will make it simpler to market and sell the various co-products and intermediates produced by these facilities.

An agribusiness and bioenergy enterprise, the business specialises in the production, refinement, trade, and production of ethanol from sugar.

Through its subsidiary, KBK Chem Engineering, it also offers complete distillery, ethanol, and specific sugar processing equipment as well as biofuel plant solutions. The distilleries of SRS produce ethanol that may be combined with gasoline and alcohol that is suitable for human use.

To address unmet demand, the business stated in June 2021 that it will invest Rs 4.5 billion to increase its ethanol production capacity from 970 KLPD to 1,400 KLPD.

The board had authorised increasing the capacity from 720 KLPD to 970 KLPD in February 2021. After the debt restructuring process and the ensuing open offer, SRS is now a Wilmar International subsidiary (WIL). One of the biggest companies in the world that processes and sells palm oil is WIL.

During the third quarter of September 2021, SRS reported a net loss of Rs 978 m due to reduced income and higher financing expenses.

In the same quarter of the prior fiscal year, it had reported a net profit of Rs. 1.1 billion.

The next stock on our list is Dwarikesh Sugar Industries.

The corporation operates in the sugar, industrial alcohol, and co-generation of electricity industries. Under the name Bundki, it does business.

80 percent of the overall revenue comes from sugar, while 13 percent comes from power. The remaining 7% comes from the distillery (ethanol and industrial alcohol) industry.

The business has three production sites in the state of Uttar Pradesh.

The construction of a 175 KLPD distillery at Dwarikesh Sugar’s Dham Unit in Bareilly, Uttar Pradesh, was announced in July 2021.

The company’s current distillery capacity is 162.5 KLPD, and it is currently being used to around 90% of its potential. It anticipates finishing the project in 15 to 16 months.

The project would cost Rs 2.3 billion, of which Rs 1.9 billion will be financed by banks, and Rs 464 m will be covered by internal accruals.

In 2022, revenue is anticipated to increase due to this capacity development.

Dwarikesh Sugar recorded a net profit increase of 123.4 per cent for the three months ending in September 2021, coming in at Rs 396 m. The company’s net profit for the same time the previous year was Rs 177.4 m.

Balrampur Chini is the last stock on our list.

The business is one of India’s biggest integrated sugar producers. The company’s affiliated enterprises include co-generation of power and distillery operations.

The company’s sugar business generates 82% of its sales, followed by its distillery business (at 10%) and its co-generation power business (at 4%). (8 per cent).

Since its entry into the distillery industry in 1996, it has put four distilleries into operation. Its four distillation units have a 520 KLPD capacity each. Their main activity is the manufacturing of ethanol and industrial alcohol.

Balrampur Chini has increased its capacity through acquisitions and development projects throughout the years.

The company invested over Rs 2 billion in January of last year to expand its distillery operations. In order to increase its distillery’s capacity from 520 KLPD to 840 KLPD, it plans to invest an additional Rs 4 billion during the current fiscal year. At its Maizapur facility in Uttar Pradesh, an additional 320 KLPD would be added to do this.

The capacity ought to start operating during the ethanol season (December–November) of 2022–23.

Over the following three years, the company’s management predicted that the distillery business will generate close to 30% of its sales.

Balrampur Chini recorded a 6% rise in net profit at Rs 831 m in its most recent quarterly reports. At the same time last year, it had a net profit of Rs 783.

Why should ethanol stocks be a part of your portfolio?

India is expected to overtake the United States and Brazil as the third-largest market for ethanol globally by 2026, according to recent research by the International Energy Agency (IEA).

This is hardly shocking given that India’s demand for ethanol increased to an expected 3 billion litres between 2017 and 2021.

Government regulations were the main factors influencing this demand, although other elements including the general need for transportation fuel, pricing, and the design of particular regulations also influenced sales.

The need for ethanol is anticipated to rise in the future.