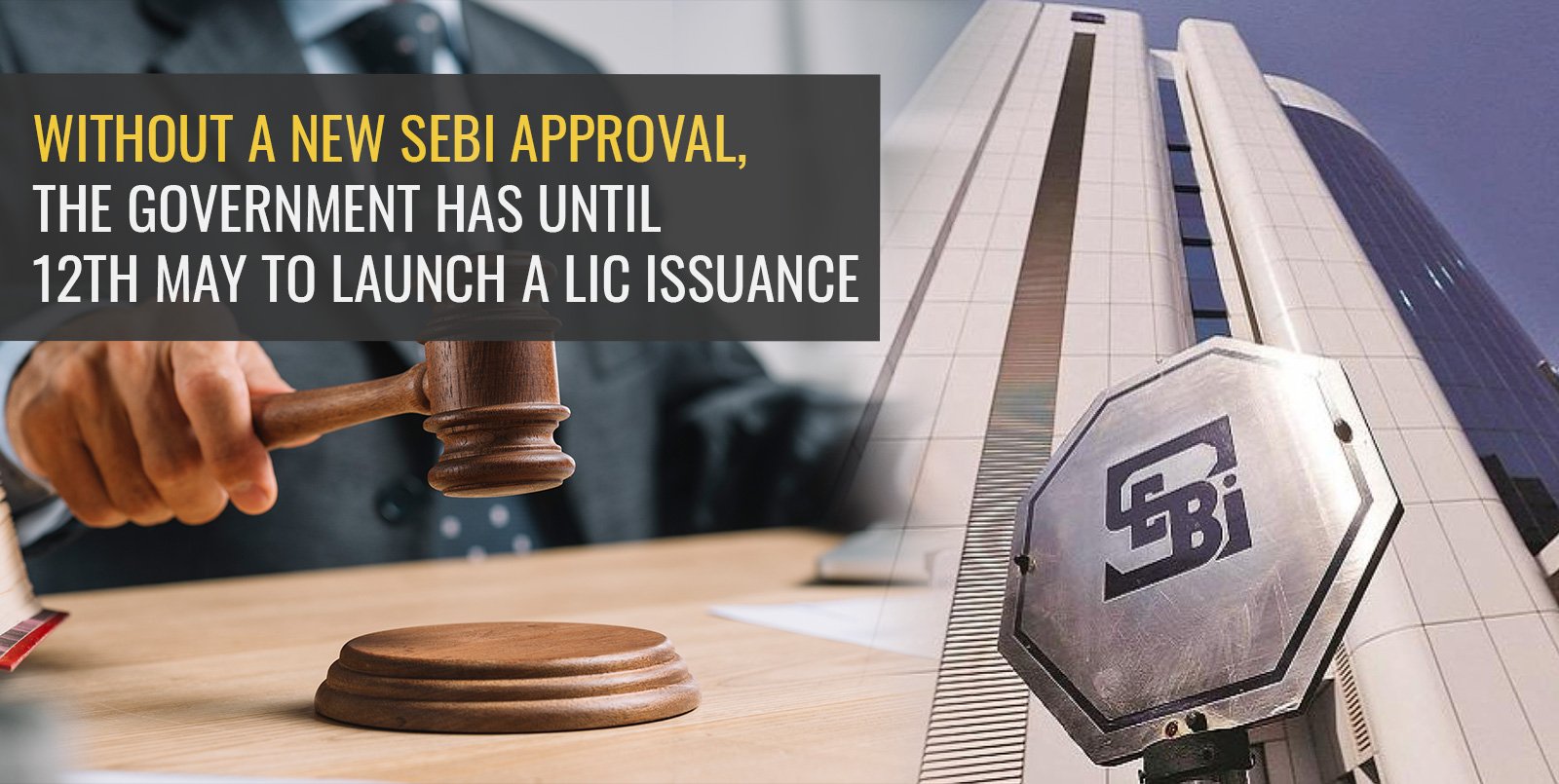 According to an official, the government has until 12th May to launch the LIC IPO without having to file new paperwork with market regulator SEBI. The government had intended to sell roughly 31.6 million shares or a 5% interest in Life Insurance Corporation in March, with the proceeds expected to be about Rs 60,000 crore, but the Russia-Ukraine situation has derailed the plans, since stock markets are very unpredictable.

The government submitted the DRHP for the IPO with SEBI on February 13, and SEBI approved it last week. “Based on the paperwork submitted with SEBI, we have until 12th May to launch the IPO. We’re keeping an eye on the volatility and will submit a RHP with a price range shortly “a source confirmed. The financial results of LIC, as well as the embedded value till September 2021, were detailed in the DRHP submitted with SEBI.

If the government misses the 12th May deadline, LIC will have to submit new paperwork with SEBI detailing the December quarter’s performance as well as updating the embedded value. An international actuarial firm estimated LIC’s embedded value, which is a measure of the consolidated shareholders’ equity in an insurance business, to be at Rs 5.4 lakh crore as of September 30, 2021.

Despite the fact that market volatility has decreased in the recent week, the official said that it would wait for the market to stabilize more before investing in the stock. Retail investors would be able to buy up to 35% of LIC’s entire IPO size. “Retail investors must contribute roughly Rs 20,000 crore to the share set aside for them. According to our market analysis, retail demand is now insufficient to bid for the whole quota of shares,” according to the official.

The LIC IPO will be the largest ever in Indian stock market history, with a 5% stake dilution, and if listed, LIC’s market capitalization would be similar to top businesses like RIL and TCS. Paytm’s IPO in 2021 raised the most money ever, at Rs 18,300 crore, followed by Coal India, which raised roughly Rs 15,500 crore, and Reliance Power, which raised Rs 11,700 crore. However, the government did not specify the discount that would be granted to policyholders of LIC staff in the public offering in the DRHP.

Employees may get up to 5% of issue size and policyholders can receive up to 10%, according to industry standards. So far, Rs 12,423.67 crore has been raised via OFS, employee OFS, strategic disinvestment, and repurchase during the current fiscal year.

Before making a final decision, the government wants markets to stabilize

Official sources say the Center is waiting for the stock market to calm down after Russia’s invasion of Ukraine, before proceeding with the massive IPO of insurance giant LIC. This has raised the possibility of the problem being postponed for the time being.

Since Russia’s invasion, the country’s largest IPO has been mired in doubt, and plans to list it before the end of the fiscal year on March 31 seem to be in peril. According to sources, the government has until 12th May to announce the IPO based on paperwork submitted with the stock market regulator SEBI.

On February 13, the government submitted a draft red herring prospectus with the Securities and Exchange Board of India (SEBI), and sources claimed that all eyes are now on the status of the stock market, with any listing contingent on when volatility subsides.

According to the sources, officials are keeping an eye on the volatility index, which has been hovering at 25.3 since Russia’s invasion of Ukraine, and the government believes it should settle around 15 levels before deciding on the time of the LIC IPO.

The markets have been bumpy, and there is concern that this could have a significant influence on the LIC listing, perhaps jeopardizing the Center’s ambition to generate about Rs 70,000 crore via the IPO.