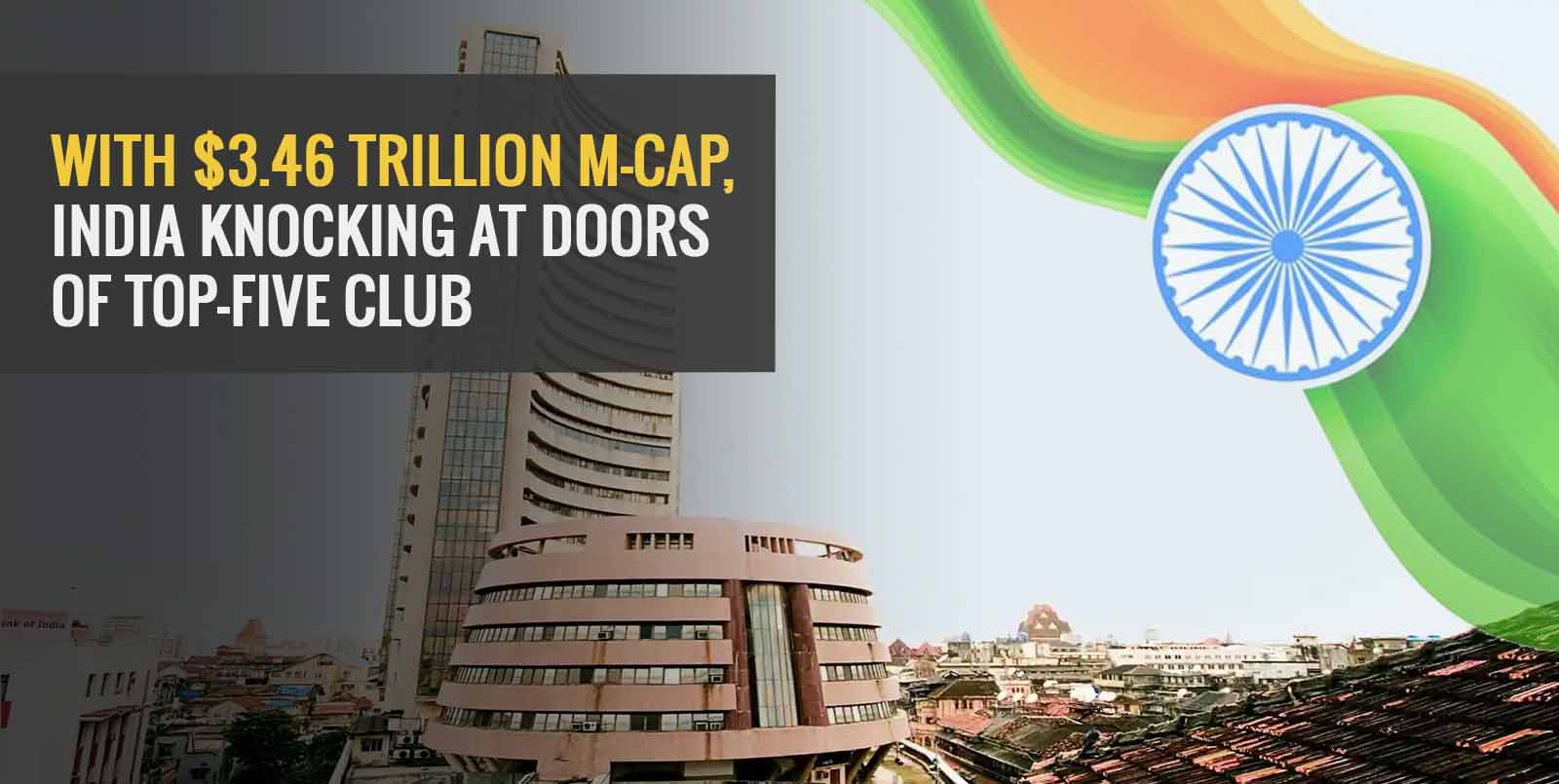 India’s stock market is inching closer to the United Kingdom in terms of value and is likely to gain entry into the top five markets in terms of market capitalisation, according to some reports. India’s market cap is currently over $3.46 trillion.

It may be recalled that the country’s market cap was at $3.4055 trillion in mid September, when India overtook France which was at $3.4023 trillion. Back then, India became the sixth biggest stock market, as per news reports, even as the benchmark index, BSE Sensex rallied over the 59,000 mark for the first time around that time. As per data cited in media reports, the United States is the leading country in terms of m-cap at $51.3 trillion, followed by China which has an m-cap of $12.42 trillion and Japan, with a market cap of $7.43 trillion. Hong Kong came in fourth with a market cap of $6.52 trillion, as of mid September this year.

Currently, at $3.46 trillion market capitalisation, India is closing in on the UK, whose market cap is at $3.59 trillion. India’s market cap has risen 37 per cent this year, in contrast to the UK, which saw a rise of nine per cent, reportedly. The market cap India has now touched has come on the back of the stock market rally ever since the low of March 2020. When the markets touched a low on March 23, 2020, the m-cap of listed firms in India collectively went down to $1.3 trillion, the lowest market cap in four years to that date. The first time India’s market cap touched $1 trillion level was in 2007.

As per reports, the rise in the BSE Sensex has exceeded 130 per cent, from the low of the first wave of the pandemic and the subsequent lockdowns. India’s benchmark index has generated returns (annualised) of nearly 15 per cent in terms of the dollar in the past five years, more than two-folds that of the UK benchmark, the FTSE 100 index, which has given returns of about 6 per cent, as per data.

India is experiencing an initial public offerings (IPO) rush this year. According to reports, Indian companies have raised $9.7 billion through IPOs till September this year, ie, in nine months. This is said to be the highest funds raised by companies via IPOs in the past two decades. As many as 72 IPOs have hit the markets in the nine month period in 2021, according to data, the second highest since 2018, when the nine month timeframe saw 130 IPOs.

The low interest rates by India’s central bank, the RBI and an increased retail investor participation have also contributed to the rising market capitalisation, experts note. In its latest meeting in early October as well, the RBI has stayed with the low interest rates, to ensure liquidity. Further, even as the BSE Sensex created history when it touched the 60,000 mark for the first time on September 24 this year, retail participation has risen and investor accounts have gone up by 60 per cent in the past 18 months, according to the BSE Chairman who has been cited in news reports. According to data from the BSE, the number of stock market investors has gone up by 10 million from June 6, 2021 to September 21, this year, reportedly the fastest addition in the history of the markets in India.

As per a report, IPOs are expected to contribute $400 billion to the market capitalisation in the next three years. Further, the report notes that India’s market cap will rise from the current levels to more than $5 trillion come 2024.

At a market cap of $3.46 trillion, India is close to joining the top-five countries in terms of market cap. The UK’s market cap is currently at $3.59 trillion, and has seen a rise of nine per cent in m-cap this year, while India’s m-cap has increased 37 per cent thus far in the year.

What is India’s market capitalisation?

The market cap India currently has is $3.46 trillion, according to reports, making it the sixth largest in the world.

What are the top five countries in terms of market cap?

Currently, the US, China, Japan, Hong Kong and the UK are the top five in terms of market cap, while India is closing in at the sixth place.

What was the market cap India touched during the low of March 2020?

India’s market cap touched a low of $1.3 trillion in March 2020, when the first wave of the pandemic hit the world. Ever since, the BSE Sensex has risen over 130 per cent, reports say.