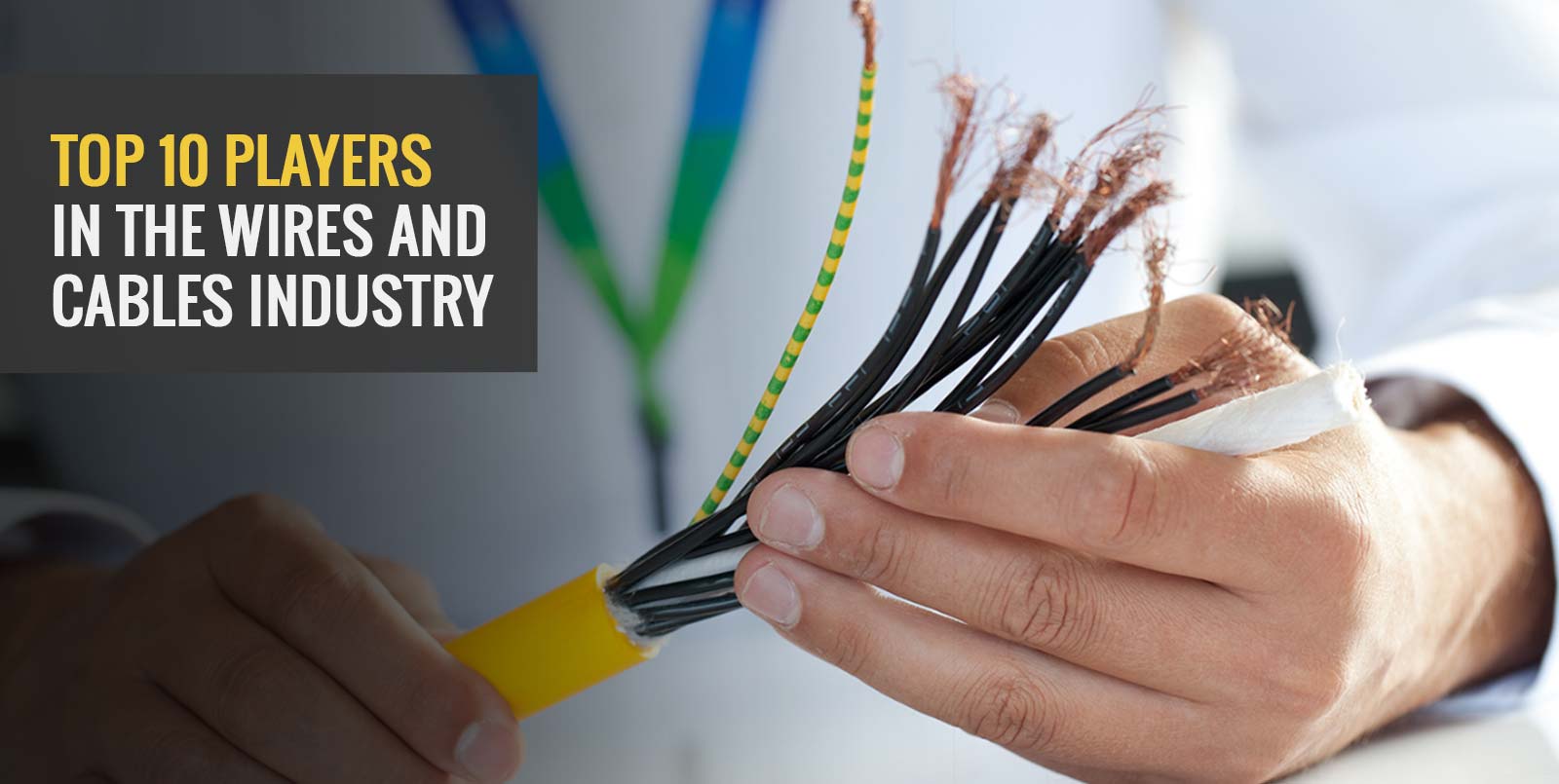 The wires and Cables Industry is a sector that is historically considered as an unorganized segment. However, things are changing in the industry where the organized players are making their presence felt. There are various growth drivers in the place as well. Let’s understand those growth drivers and take a look at the top ten Wire and Cable Industries based on the market capitalisation. However, before we get into the details, let’s understand the industry basics.

The Indian domestic wires and cables market is at about Rs 450-500 billion and makes up approximately 40-45 percent of the Indian electrical industry. Generally, wires consist of a single conductor whereas, cables involve one or more conductors which are used for the transmission of electricity, data, or signals. Following are the different types of wires and cables applications.

Power Cables are used for the transmission and distribution of electricity from power generators (thermal, solar, and wind-solar plants) to sub-stations and thereon for power supply to end-user segments, such as residential, commercial (airports, metro, hospitals, among others), and industrial units.

Solar cables need to have lifetime reliability of up to 30 years, resistance to extreme temperatures (-40°C to 120°C), ozone, ultraviolet (UV) and halogen-free, flame and fire retardancy, resistance to mineral oils, acids, and alkalis, and resistance to impact, tear and abrasion.

These are for process control applications. Instrumentation cables convey low-energy electrical signals used for monitoring and controlling electrical power systems or any associated process control systems by means of signaling.

The Telecom cables are for the transmission of voice and data.

6. Other types of cables

In regards to the performance of the wire and cable sector in FY21, the domestic wires and cables industry suffered a contraction in FY21 because of the economic slowdown on account of the pandemic. Various end-user industries were hit by the lockdown, and most ongoing or planned projects were stalled. Investments in construction and infrastructure slowed down as the government prioritized spending on healthcare to fight the pandemic while private industry lacked demand visibility.

Consumer sentiment remained low, hampering discretionary spending. While the situation is improving gradually, certain challenges remain. A sharp uptick in prices of key raw materials such as copper, aluminum, steel, and PVC, along with their availability, as well as labor, and supply chain constraints added to the complexity of the business environment.

While the previous year witnessed some measure of decline in overall demand the long-term growth prospects are well in place. Consumption led by rapid urbanization, a higher working population, and better policy initiative and focus on infrastructure are expected to be major growth drivers for the sector. Let’s have a look at the different factors in detail.

It is a known fact that the Demographic dividend is better placed in India has almost 100 crore people or 62 percent of India’s population in the 15-60 age bracket. Such a demographic constitution would result in better growth for the industry. Apart from this, nuclearisation is also translating into consumer demand.

There has been rapid urbanization that has happened over the past few years. Just to put the number in perspective the metropolitan cities are expected to increase to 68 in 2030 from 46 in 2001 (Source: National Infrastructure Pipeline). With the infrastructure growth like roads in urban and even the rural area – the demand for power, telecom, and even optic fiber cables are likely to increase in years to come. With the building of smart cities and foreign and domestic investments, urbanization in India is progressing at a never-before scale. It is complemented by the Union Government’s ambitious ‘Housing for All’ scheme, which is supposed to culminate in 2022, with support for a total of 1.1 crore houses under PMAY (U) and 2.1 crores under PMAY (G).

In 2019, the Union Government announced the National Infrastructure Pipeline (NIP), with a proposed outlay of Rs 102 lakh crore to execute more than 7,000 projects over five years. This significant push from the government has increased India’s overall potential by manifold and has presented direct and indirect players in the infrastructure value-chain with a momentous opportunity. The road network would also drive the demand for the cables and wires sector. In addition to this, the electrical industry is a beneficiary of this, as growth in infrastructure will drive derived demand for wires, cables, and other electrical products such as lights, switchgear, and further. One of the main drivers of development through which every inhabited village of India stands electrified today. Various state and central government policies continue to emphasize affordable and accessible electricity, and the electrification drives are supposed to gain further momentum. The National Electricity Policy (NEP) 2021 focuses on quality power and accelerated investments through PPP in electricity distribution.

Production Linked Incentive (PLI) scheme introduced in April 2020 was aimed at achieving large-scale electronics manufacturing in India. Further, the state-level policies and incentives also add up to the benefits. The government has also announced several initiatives for exporters such as tax refund scheme, enhanced credit scheme, Narvik (Niryat Rin Vikas Yojana) scheme for enhanced insurance cover, and reduced premium for small exporters to boost export performance. The wires, and cables market size globally is estimated at USD 140-150 billion in 2020, which is estimated to grow in the mid-single digits. It would provide a good growth trigger for the exports market to the Indian wire and cable industry.

Digitalization is increasingly bringing major transformations in businesses. The transformation is being witnessed across the board, from products, processes, and people, to customer-centricity, governance, and social projects. Bharat Net is the world’s largest rural broadband connectivity program, aimed at connecting all the 2.5 lakh Gram Panchayats (GP) across India. As of June 2021, the Length of OFC Laid was 5,24,686 km, and the number of GPs where optical fiber cable (OFC) Laid was 1,72,941.

Factors like demographic dividend, Rapid urbanization, SMART Cities project, and Policy Initiatives are likely to drive the demand in the long term.

Now let’s have a look at the top players in the industry based on market capitalization.

If we took a look at the list, there are only five players in the sector having a market capitalization of more than Rs 1000 crore. Another noticeable factor is the gap between the top player and the second one is also higher. Polycab which enjoys the largest Market Cap has been listed in the last few years among other players, being listed for a longer period. In regards to the other details, we have provided the sales and PAT figures for FY21. Also updated are the 52 week high and low prices along with the respective dates of touching 52 weeks high low.

Let’s take a look at the price charts of the top five players in the wire and cable segment.

First on the list is Polycab India. While one may argue that Polycab India has got other segments as well, such as electrical goods. However major contributor has been cables and wires. If we take a look at the chart movement, it has been a great performer compared to the other cable stocks.

The List of next five stocks is given below.