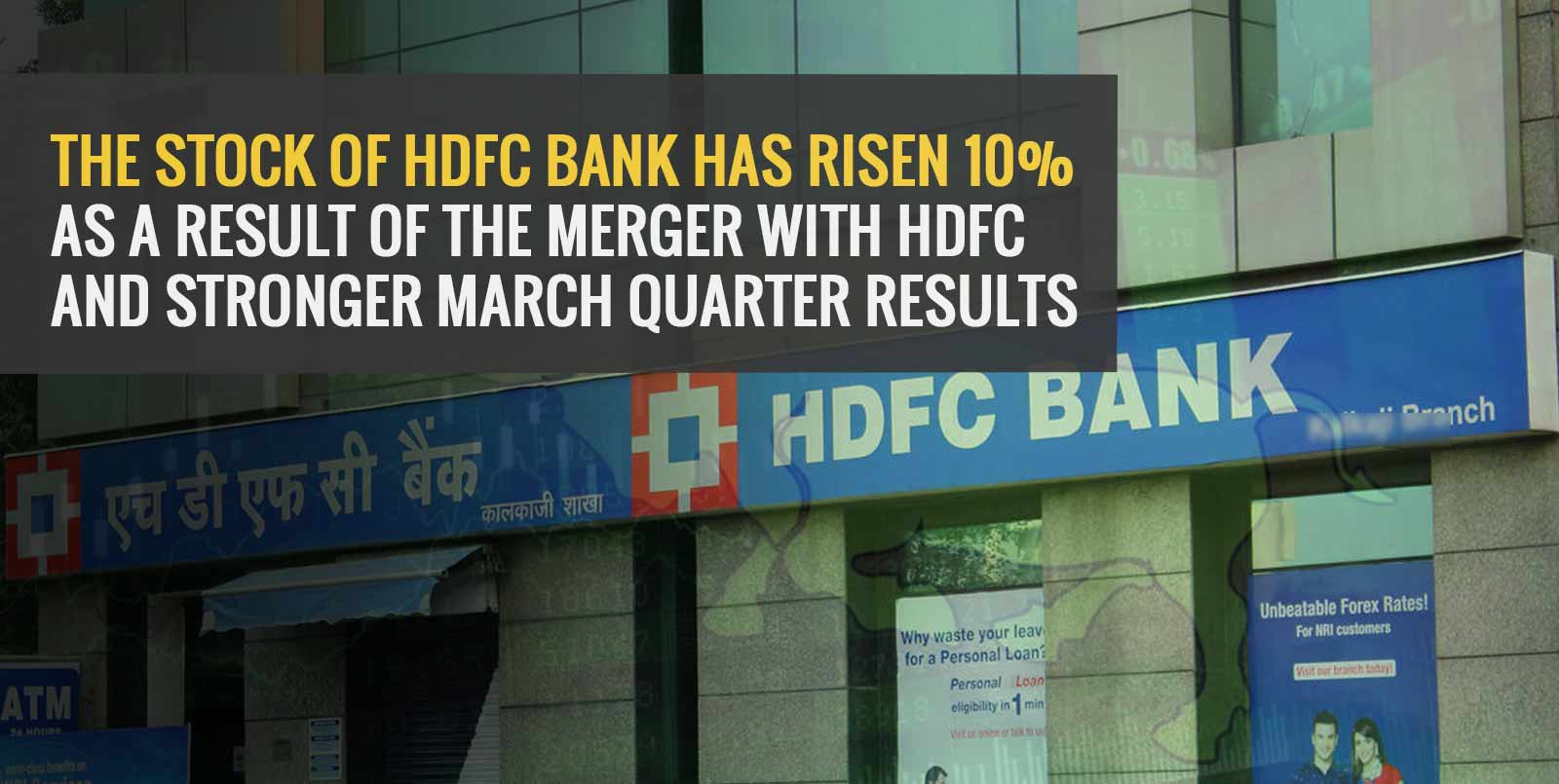 HDFC Bank’s stock gained 10% in early trading on April 4 on the news of a merger with Housing Development Finance Corporation (HDFC) and higher quarterly and annual results. HDFC has authorized a plan to combine HDFC with HDFC Bank and merge wholly-owned subsidiaries HDFC Investments and HDFC Holdings into HDFC.

According to HDFC, the programme is subject to the necessary clearances. It further said that the share exchange ratio for the merger of HDFC and HDFC Bank will be 42 HDFC Bank shares for every 25 fully paid up HDFC equity shares. As of March 31, 2022, the bank’s advances were about Rs 13,69,000 crore, up 20.9 percent year over year and 8.6 percent quarter over quarter, according to a press statement from HDFC Bank.

What is the consequence of HDFC Limited and HDFC Bank merging

On Monday, HDFC Bank and HDFC Ltd declared their intention to combine, paving the way for one of India’s largest financial transactions. The news of the merger resulted in a substantial increase in the two companies’ share values, which were up over 7% in early trading hours. The acquisition is likely to finalize in the next 18 months, subject to regulatory clearances and other normal closing conditions, according to HDFC Bank.

What is the merger strategy?

HDFC Limited, India’s largest housing finance company with Rs 5.26 trillion in assets under management (AUM) and a market capitalization of Rs 4.44 trillion, will merge with HDFC Bank, India’s largest private sector bank by assets with a market capitalization of Rs 8.35 trillion, according to the transaction structure. HDFC Limited’s subsidiaries and partners will likewise be transferred to HDFC Bank.

What will happen to the ownership?

What are the advantages and disadvantages of the merger for the two companies?

While the move will help them utilize their distribution across urban, semi-urban, and rural regions, it will also boost their capacity to cross-sell items to a bigger consumer base. The combined financial sheet of Rs 17.87 trillion and net value of Rs 3.3 trillion would allow for higher-scale underwriting.

You must first create a Demat account before you can participate in online investing and trading. You can begin both in less than five minutes with the aid of Angel One. Any queries you have concerning your Demat account will be answered by Angel One.

Q1. Is it possible to have a zero balance at HDFC Bank?

Some HDFC Bank Savings Account types also provide benefits such as unrestricted cash withdrawals at ATMs and no minimum balance requirement, which adds to the attraction of a Savings Account.

Q2. What is the HDFC IMPS limit?

The maximum amount that may be transferred per transaction, according to the NPCI circular, is Rs 2 lakhs. Any transaction that exceeds Rs 2 lakhs will be rejected and paid back to your account. IMPS transfers can only be made between banks that are participants in the IMPS transaction.

Q3. What happens if the HDFC Bank’s minimum balance is not met?

If you do not maintain the required amount on your savings account in a metro city, HDFC Bank may charge you as much as 600 rupees. The total price is more than Rs 600, including service tax and another cess. In the case of HDFC Bank, the minimum balance limit is Rs 10,000 for urban branches and Rs 5,000 for semi-urban branches.