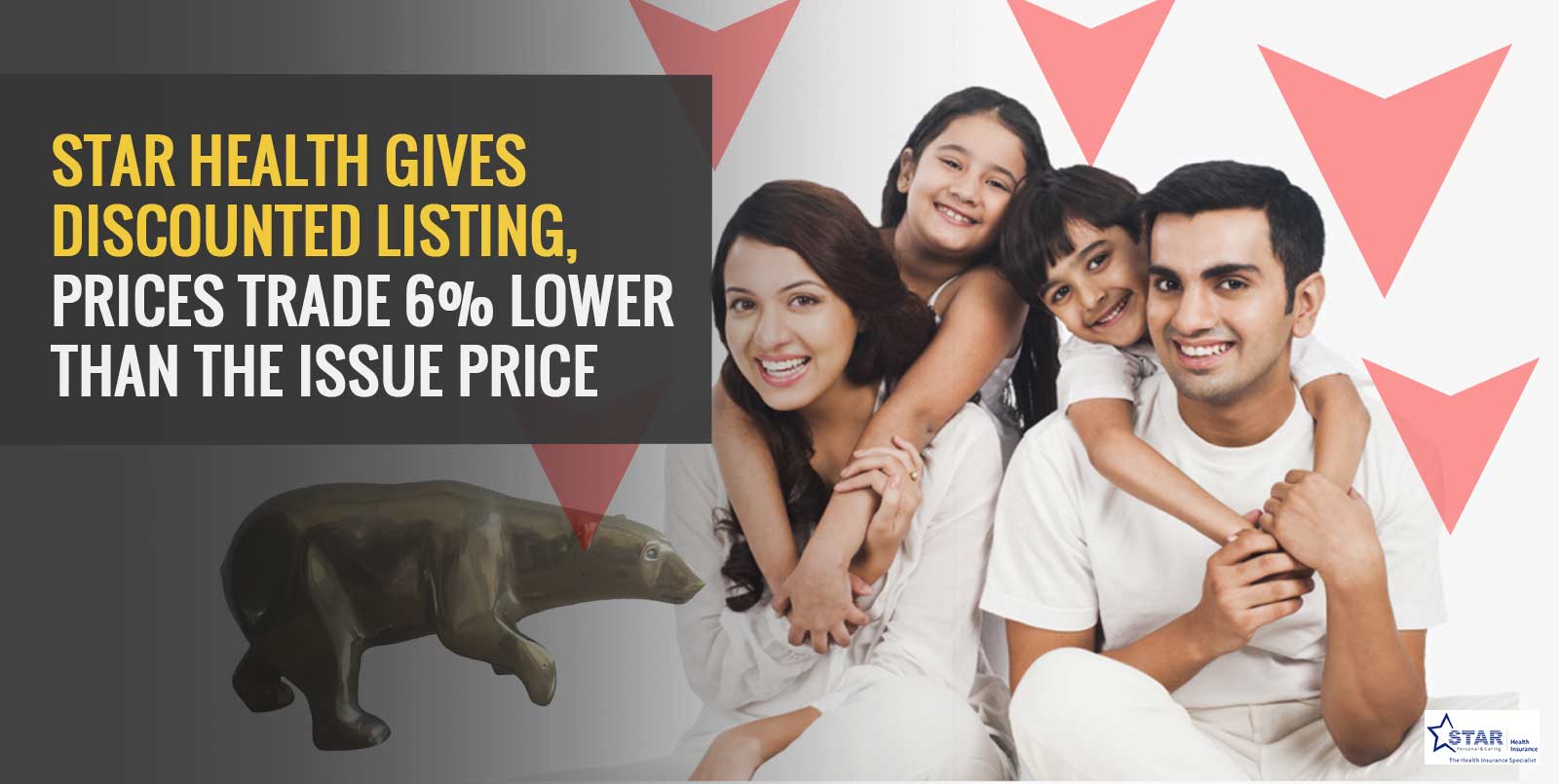 Star Health and Allied Insurance’s stock price did not meet expectations on its debut. The price reacted sluggishly due to valuation concerns.

The initial public offering of Star Health, which was launched on November 30, was subscribed to 79 percent. Most analysts had given a favourable rating to the issue, though they were worried about its valuations.

On the National Stock Exchange, the Star Health listing price was marked at Rs. 845 which is lower by 6.1% compared to its issue price of Rs. 900. They made a low of Rs. 828 in the first-hour candle and rose above its issue price in a few minutes into the trading session. The stock made a high of Rs. 940 and by 11 AM, the price was spiraling around the issue price itself.

As the Bombay Stock Exchange is concerned, the Star Health list price was marked to be lower by 5.7% at Rs. 848.8. It made a low of Rs. 827.50 and similar to how it jumped on the NSE, the price at BSE as well made a high of Rs. 940 within the first hour of the trading session. Later, the price gravitated towards its issue price of Rs. 900.

The portion allotted to non-institutional investors was also undersubscribed. This led to the reduction of the offer-for-sale size by almost 500 crores. The total issue size was also lowered to around 6,400 crores.

The company demanded a higher price band of around Rs 900 to a higher market cap-to-net-premium valuation. This was at a premium to the peers’ average.

The profitability of the company has been severely affected due to the pandemic. It is expected to remain a concern in the future as well.

Despite that, Star Health remains one of India’s largest private health insurers, with a market share of 15.9 percent in fiscal 2021. The company mainly focuses on the retail health and group segments.

The issue of Star Health had opened on 30th November 2021 and closed on 2nd December 2021. On the last day of its subscription, a total of 0.79 times subscription was recorded. Following are the details that comprise the percentile.

Star Healthis a leading player in the retail health insurance market in India. It had a retail health gross premium of over Rs 8,215 crore in the financial year ended September 2018. It has been suffering from severe setbacks due to the pandemic. Gross Written Premium is the total premium that an insurance policy has been written. It does not include additional or returns premiums.

The stock price of Star Healthreacted sluggishly due to valuation problems. It opened low and took a dip but later until mid-day recovered back to its issue price.

The robust growth of the health insurance segment can be attributed to the various macro factors such as the rise in awareness about the illness and its effects on the economy. Star Healthis well-positioned to take advantage of the expansion in the market.

What is Gross Written Premium?

Gross Written Premium is the total premium that an insurance policy has been written. It does not include additional or returns premiums. Gross premiums written is the sum of all the policies that the insurance companies wrote during the year.

How many shares did the Star Health IPO have in one lot?

How is Star Health going to utilise the funds collected from the issue?

A part of funds received by the insurance company from this offering is planned to go toward increasing the base capital and the other part towards improving the solvency.