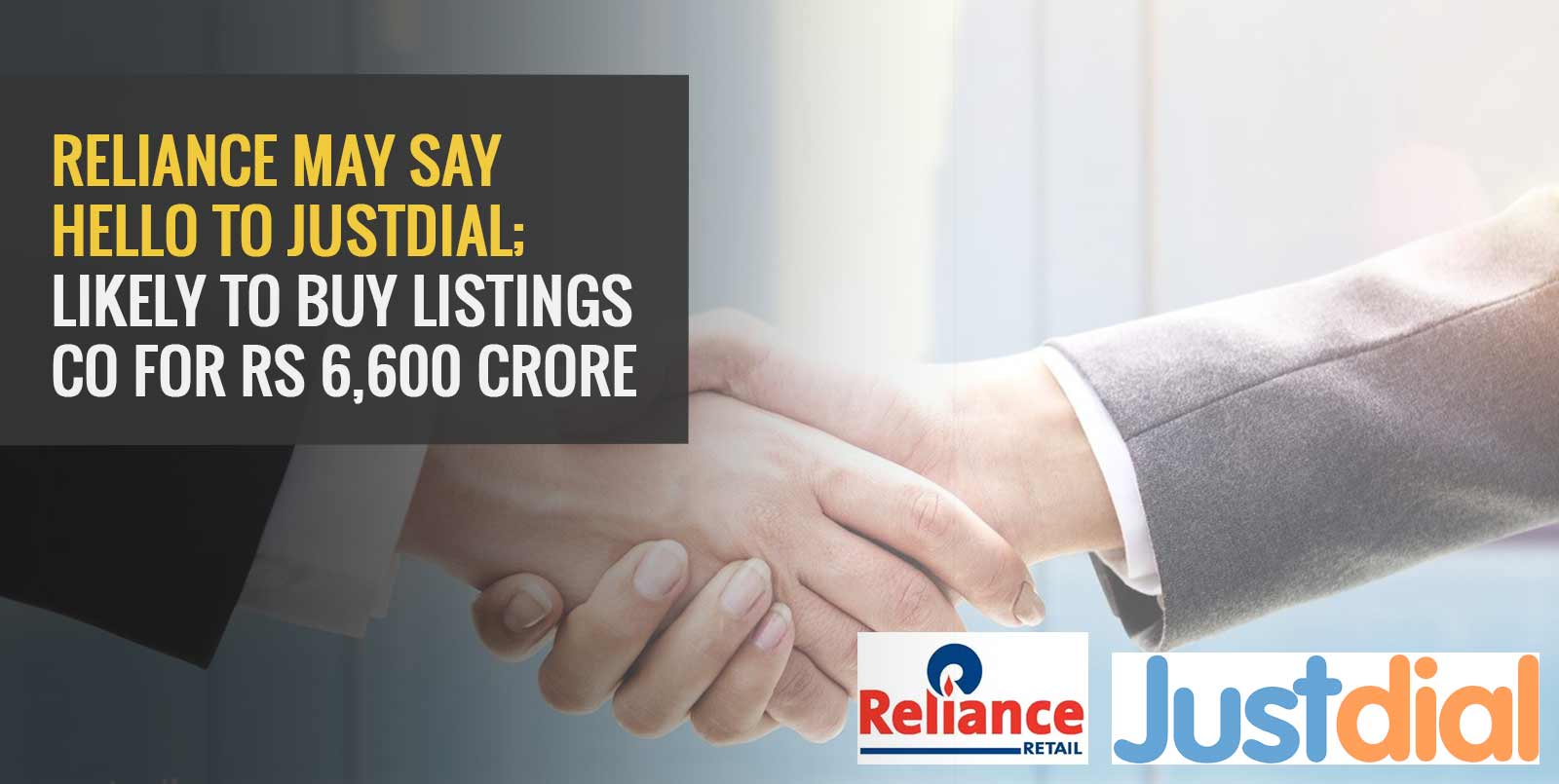 Reliance Industries (RIL), news reports suggest, is in talks to buy local search engine Justdial from its founding promoters for $800 to 900 million (Rs 5,920 to Rs 6,600 crore). Reportedly, the two sides have been in talks ever since April.

News reports suggest that an official announcement is expected on July 16, following a meeting of 25-year-old company Justdial’s board. Justdial’s Managing Director and family hold a 35.5 per stake in the listings company, which has a valuation of nearly Rs 2,388 crore. According to news reports, RIL may purchase partially from the managing director and launch an open offer for an added 26 per cent of the company’s equity. This would mean a likely payout of over Rs 4,100 crore. In the event of the open offer getting completely subscribed, Reliance may come to hold more than 60 per cent stake. Further, RIL is also likely to direct capital into Justdial.

Following the news of this likely deal, Justdial shares went up 4 per cent on Wednesday. The stock gained 3.78 percent over two days and the listing company’s market cap increased to Rs 6,954 crore on the BSE. The company’s share has grown nearly 77 percent since the start of 2021.

This development, if it comes through, is significant because the oil to telecom conglomerate RIL is currently a leading organised retailer, while Justdial is among the leading local search engines in India. The latter has an average of nearly 150 million unique users across its several platforms like website, mobile, apps and its hotline. In the year ended March 31 2021, Justdial had more than 30 million listings across over 250 cities. The company’s revenues for the March 31, 2021 quarter was a little over Rs 175 crore, with a profit of more than Rs 33 crore, as per the earnings statement of Justdial.

Reliance Industries, for its part, is known to be the country’s most valuable company at over Rs 13 lakh crore. It was the first company to reach a market cap of Rs 16 lakh crore in September 2020. Reliance Retail, the retail arm of RIL, is likely to become the next growth engine for the conglomerate, according to brokerage Goldman Sachs, which expects RIL’s retail revenue growth of 36 per cent CAGR over the next four years. Analysts have noted that RIL’s focus on boosting the retail arm’s digital capacity is likely to drive the company’s market share gains. A likely deal between RIL and Justdial will further strengthen the retail space for RIL, experts observe. Reliance would have access to service providers, retailers in several towns across India and also consumer data, if the deal comes through. Further, Justdial also launched its B2B portal, JD Mart, earlier this year to help B2B buyers choose vendors who offer a range of products.

It may be recalled that Reliance Retail, with a footprint across over 7,000 cities, has more than 33.8 million sq ft of retail space in the country. It was in a deal to acquire Future Group’s retail, distribution and warehousing business last year but the deal is yet to come through because of a lawsuit by e-commerce giant Amazon.

Earlier, the Tata Group was reportedly in talks with Justdial in a bid to acquire the listing company so as to boost its super app plans. It was reported that Tata had plans to launch a super app that would bring together e-commerce, financial services and payments in order to take on Reliance’s similar interest in launching such a super app as well, on the back of Reliance Jio.

According to a recent Ericsson Mobility Report, the average traffic for every smartphone user in India has grown from 13 GB a month in 2019 to 14.6 GB per month as of 2020. The report also noted that smartphone subscriptions made up 72 per cent of the overall mobile subscriptions in 2020. The speedy adoption of smartphones and a large chunk of the population using the Internet on their smartphones first has encouraged companies to eye super app plans in India. The Tata Group and RIL are both on their way to boosting their super app plans, with a slew of acquisitions and launch of new products.