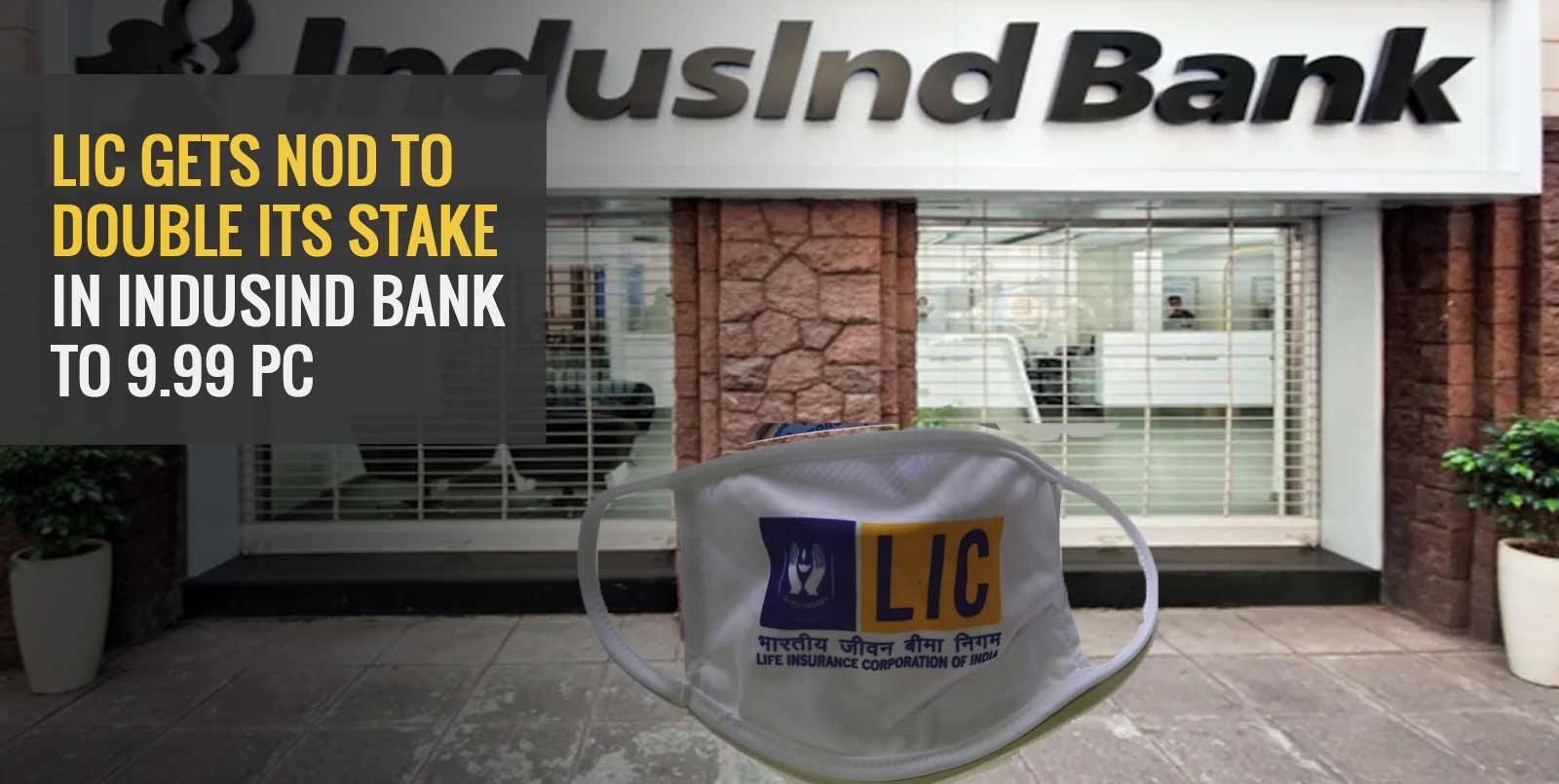 The Reserve Bank of India (RBI)  has reportedly given the go-ahead to state-owned insurer LIC  to double its holding in IndusInd Bank to nearly 10 per cent (9.99 pc). The LIC stake in the private bank was 4.95 per cent thus far, as per reports.

According to a regulatory filing by the bank, this approval has been given for a one-year timeframe, and the investment, if and when it would happen, is subject to market watchdog SEBI’s regulations and compliance of the same.

Further, news reports also note that promoters of private banks have also been given the nod to increase their shareholding from 15 per cent to 26 per cent. Currently, the promoters of IndusInd Bank, IndusInd International Holding Ltd, own 16.54 per cent. The promoters have reportedly indicated that they were prepared to raise their stakes to 26 per cent of the overall equity and were ready to raise over $1 billion for the same.

It may be recalled that the RBI has given the nod to increase LIC stake in another private bank, Kotak Mahindra Bank, from 4.96 per cent to nearly 10 per cent (9.99 pc).  The state insurer also holds stakes in Canara Bank, State Bank of India, Punjab National Bank, Axis Bank and ICICI Bank, all over 5 per cent, according to reports. According to data, 24 commercial banks have a LIC stake. Meanwhile, reports note that talks with investors for the IPO of the life insurer are in progress and the draft red herring prospectus (DRHP) is expected to be filed by the end of 2021. Further, data has it that the life insurer’s holding is four per cent of the overall market capitalization of the NSE, with an Rs 8-lakh-crore equity investment for the fiscal year 2020-21.

The permission comes after the RBI released the amended ownership rules and norms pertaining to the corporate structuring of India’s private banks towards the end of November 2021. As many as 21 recommendations made out of the total 33 by an internal working group were accepted by the RBI. Among the accepted recommendations, the increase in the cap on the promoter stakes from 15 to 26 per cent has been the most prominent. Any increase of stakes in private banks of over 5 per cent would need prior permission from the central bank, according to its norms. The RBI has also clarified in its notification that any non-promoter shareholdings would have a ceiling of 10 per cent and 15 per cent of paid-up voting equity share capital for persons and financial institutions, respectively.

The central bank had set up the working group on private bank ownership rules in June 2020. The report was submitted in November last year, and comments on the same were allowed till January 2021. Another proposal that has been accepted pertaining to private bank ownership was to raise capital requirements for fresh applicants from Rs 500 crore to Rs 1,000 crore. However, the central bank has not given the nod for the entry of large industrial houses or groups (typically with overall assets of over Rs 5,000 crore) into private banks yet and has remained silent on the proposal, according to reports.

The RBI has given the go-ahead to life insurer LIC to raise its holding in the private bank, IndusInd Bank, to nearly 10 per cent from the current 4.95 per cent. The move follows the central bank’s permission to the life insurer to raise its holdings in Kotak Mahindra Bank as well, on the back of the RBI’s ownership norms pertaining to private banks.

According to the new RBI private bank ownership guidelines, what is the cap on promoter holdings?

As per the new RBI guidelines pertaining to corporate structure and ownership of private banks, the cap on promoter stake has been raised to 26 per cent from the current 15 per cent.

What is the cap on a stake in private lenders allowed to life insurer LIC by the RBI?

The RBI has given LIC the nod to raise its stake in IndusInd Bank and Kotak Mahindra Bank from the current 4.95 per cent and 4.96 per cent respectively to 9.99 per cent.

Although an Internal Working Group set up by the RBI proposed that large industrial groups or houses be allowed to have ownership in private banks, the central bank has for now kept the proposal in abeyance.