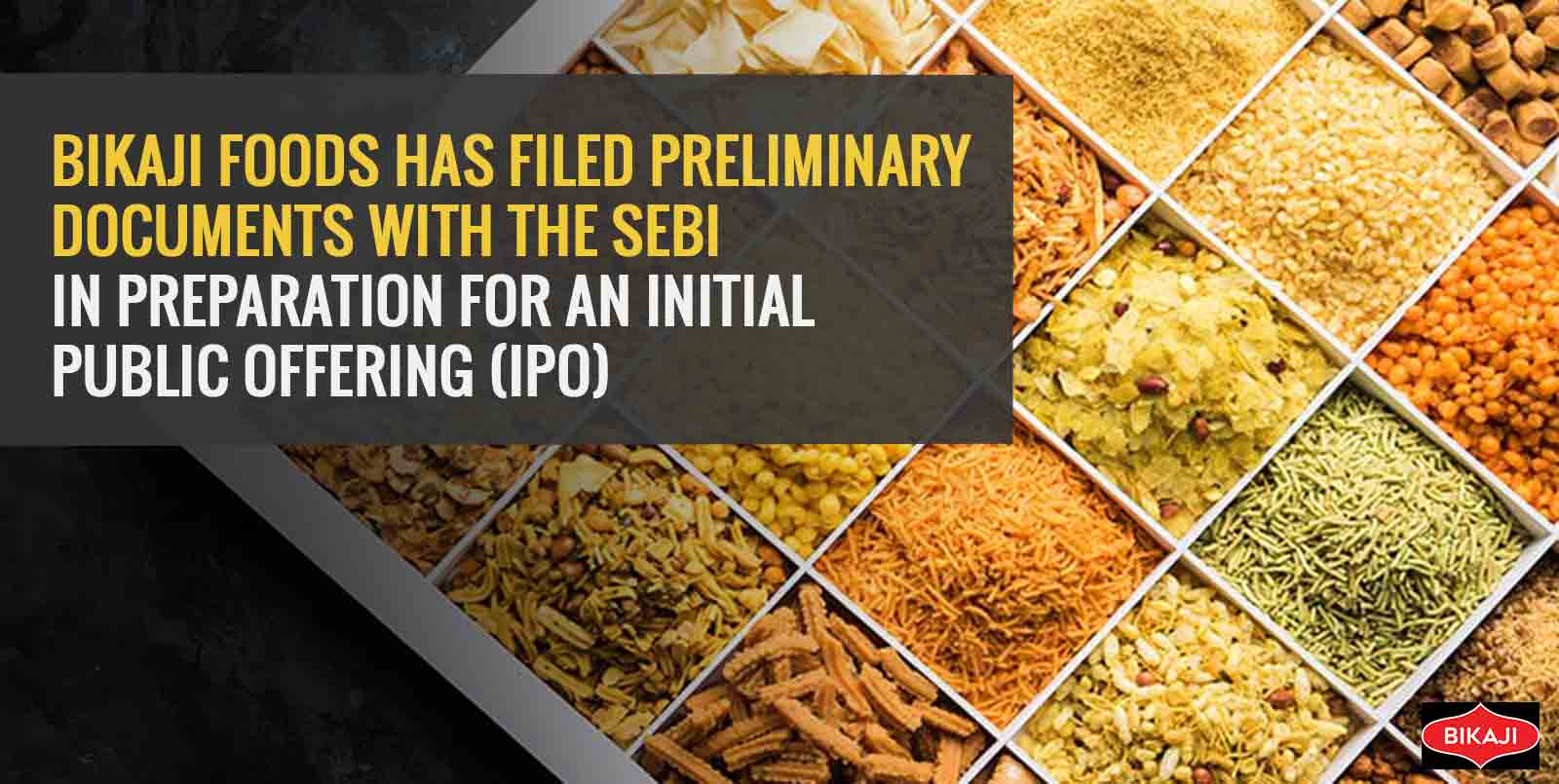 Bikaji Foods International Ltd has filed preliminary documents with SEBI in order to seek money via an IPO. The IPO comprises a pure offer for sale of up to 29.37 million shares by the company’s current promoters and shareholders. Deepak Agarwal and Shiv Ratan Agarwal each have up to 2.5 million shares in the OFS. The issue’s lead managers are Axis Capital, JM Financial, IIFL Securities, Kotak Mahindra Capital and Intensive Fiscal Services.

Bikaji is one of India’s leading fast-moving consumer goods (FMCG) businesses with a global presence, offering Indian snacks and sweets, and is one of the fastest-growing firms in the organized snacking sector in India. With an annual manufacturing capacity of 9,000 tonnes, the company was the second biggest maker of handcrafted papads.

Namkeen, bhujia, packaged sweets, western snacks, papad and other snacks, which principally comprise gift packs, frozen food, mathri range, and cookies, are among the company’s main product categories. It sold over 250 goods under the Bikaji brand in the six months ending September 2021. It now has five depots, 43 super stockists, 438 direct and 1,644 indirect distributors working with its super stockists in 22 Indian states and three union territories.

The company has six operating production facilities, with three in Bikaner, one in Guwahati, and one in Tumakuru, all of which are owned under its subsidiary Petunt Food Processors Private Limited and serve India’s southern markets.

The firm has progressively grown its presence throughout India, with operations in 22 states and three union territories, and has gained market leadership in the ethnic snacks industry in its key states of Assam, Rajasthan and Bihar, with broad penetration. It shipped goods to 35 foreign nations in the six months ending September 30, 2021, including countries in Europe, North America, the Middle East, Asia Pacific and Africa, accounting for 4.60 percent of total food sales during that time.

Can Bikaji Foods, a descendent of Haldiram, destabilize the Bhujia Barons empire

Shiv Ratan Agarwal, chairman of Bikaji Foods International, took a risk when he chose to leave his family firm in the late 1980s. He was leaving the three-generation family company that his grandpa, the legendary bhujia maker Haldiram Agarwal, had begun. In the 1980s, Haldiram Bhujiawala was already a well-known namkeen brand throughout the nation, so starting again with a new brand name, Bikaji, would be difficult.

The motivation for operating under a new brand name, on the other hand, was for Agarwal to be able to establish a national brand. His father had divided the company among his four sons. He thought he had been taken advantage of, and there was also a geographical limitation that prevented him from selling his items in regions controlled by his brothers. By virtue of being located in a booming metro, Haldiram Bhujiawala’s Delhi branch was already a firm worth over $200 million in the late 1980s, whilst Agarwal’s was worth less than $60 million. The brothers’ hostility grew as a result of the geographical separation, and Agarwal eventually chose to leave the family company.

Bikaji Foods is now a 1,650 crore company with a 5% stake in the Indian savory and snack market worth 72,800 crores. Haldiram’s different factions continue to grow in size. While Haldiram’s Nagpur produces income of close to 3,000 crore, Haldiram’s Delhi generates revenue of close to 4,000 crore. Haldiram’s has a 31 percent market share in the snacking sector between the Kolkata, Delhi, and Nagpur families. The combined income of the three Haldiram’s is above $1 billion.